"Google and other internet companies are seeking to satisfy the increasing demand for international bandwidth by directly investing in new submarine cables, which is inflecting the demand and supply dynamics to the benefit of the countries where their cables land."

We have written for several years about how infrastructure investments by internet companies are benefiting consumers and telecoms operators by improving the performance of content delivery, and how this investment is driving consumers’ willingness to pay for internet access. In Africa, Facebook and Google are already investing in connectivity infrastructure projects alongside traditional operators such as Liquid Telecom. More submarine cables are in the works, driven by demand for internet and cloud services, developed either as private cables (for example, Google’s Equiano) or consortia with telecoms operators (such as 2Africa, in which Facebook is an investor).

In a recent paper for Google, Analysys Mason looked at the network infrastructure that Google has been building since 2010 across Asia–Pacific (APAC). A large proportion of the investment that Google made over this 10-year period focused on international capacity, which (in a region where most countries are coastal and/or archipelagos) largely means submarine cables. We worked with Professor Neil Gandal of Tel Aviv University, who developed a robust economic analysis that linked Google’s investment in cables with connectivity outcomes for countries where Google-invested cables land today.1

The larger internet companies (content and application service providers or CASPs) serve a significant proportion of internet traffic – up to 43% in 2019. Over the last 10 years, these companies’ infrastructure investments have helped to bring their content close to end users, primarily in caches within operators’ networks, and in regional points of presence (PoPs). In order to connect these PoPs to their networks and, in particular, to their data centres, these companies have long invested in capacity in the form of long leases or IRUs2 on terrestrial and submarine cables deployed and operated by telecoms operators. Internet companies (CASPs) have been investing directly in new submarine cables over the 10 years (see Figure 1). The capacity created by these investments is significant, and during this same period, has amounted to 34% of the new potential capacity brought in by new cables. 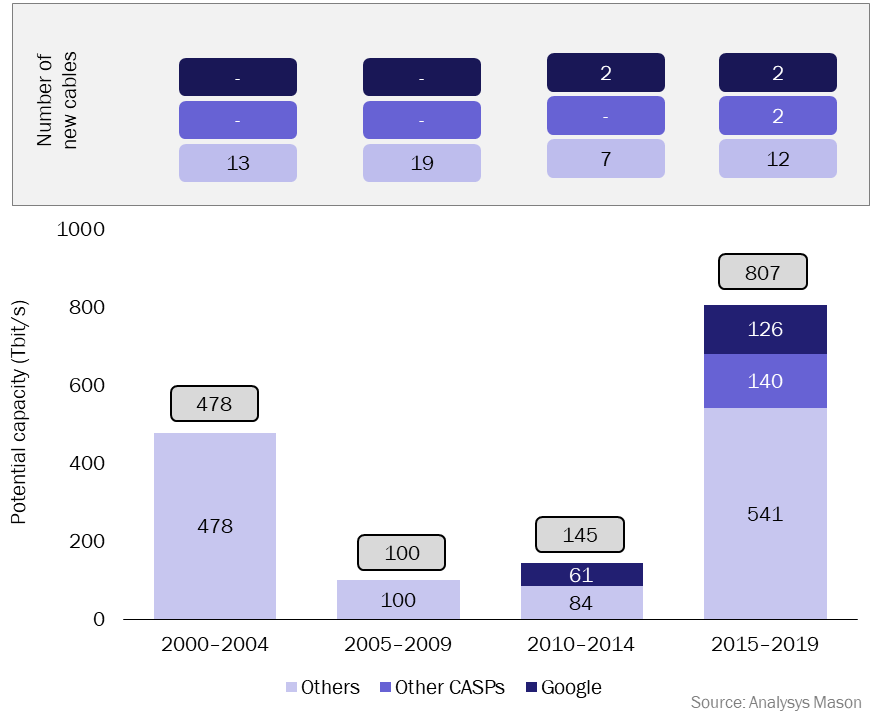 This means that large internet companies are, in practice, increasingly self-supplying their bandwidth needs. These companies contribute a large and growing share of demand for international capacity, investing directly to satisfy part of this demand, even as they continue to lease large amounts of capacity from telecoms operators. Their position in both the demand and the supply side of the international capacity market helps to accelerate the supply of new capacity (Figure 1) and help reduce prices.

We found that these dynamics are having a material, statistically significant effect on demand for data in APAC. Based on our statistical analysis, we found that the bandwidth and latency benefits from Google’s investment in cables were significant and fuelled demand for data. The analysis demonstrated that internet traffic in the APAC region was about 10% higher than it would have otherwise been if the cables had been built without Google’s involvement. This is a strong result, which we further correlated to about USD65 billion in incremental GDP between 2010 and 2019.3 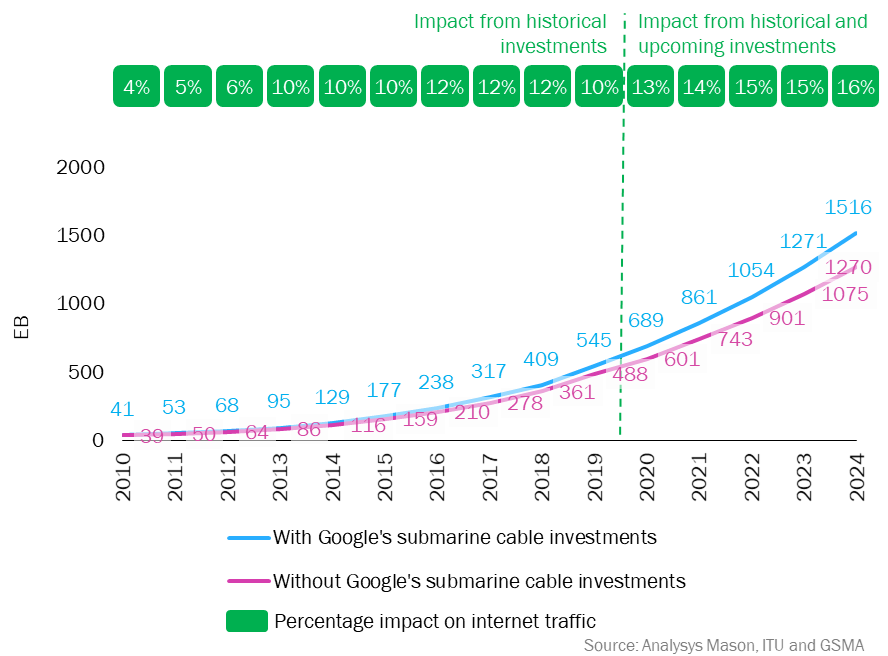 As consortium members including telecoms operators, internet companies and investors work with government and regulators to improve the digital infrastructure in more places, these results provide further evidence that international connectivity matters and that opening up submarine cables to large users of bandwidth leads to better outcomes.

2 Indefeasible rights of use, effectively open-ended leases that last for the whole lifetime of an asset.

3 This is based on an endogenous growth model developed for this paper, which is up-to-date and more statistically robust than equivalent results developed in 2012 and before.