The data centre industry has traditionally relied on metrics including floor space utilisation to determine efficiency. The rise of the cloud as a compelling alternative for larger enterprises to manage their IT workloads is changing this. In the face of ever-growing data needs, cloud providers are looking for data centres that can meet their high-density power needs, scale quickly on demand, and deliver services at a low power usage effectiveness (PUE), which traditional data centres can be ill-equipped to do. In this article, we examine the demand for cloud services, the implications on cloud providers’ data centre strategies and the attractiveness of data centres as assets for investment by private equity and infrastructure funds.

The shift to the cloud has accelerated in recent years, driving the demand for data centre capacity

While the cloud was introduced more than a decade ago, its adoption has been mostly limited to smaller enterprises or start-ups that rely on it as a cost-effective way to manage their IT needs. In recent years, larger enterprises have started a partial or full migration to cloud services or are considering doing so.

In turn, data centre providers have seen an increasing demand for capacity from cloud providers. The pertinent shift is, however, expected over the next few years when large enterprises begin to change their cloud usage from only using software-as-a-service to also using infrastructure-as-a-service, moving some or all core IT workloads into the cloud. The CISCO Global Cloud Index (GCI) predicts that by 2021, hyperscale data traffic (including that from cloud providers and big wholesale buyers such as Facebook) is expected to almost double from its current 8ZB per annum to 14ZB per annum. We believe that this may be an understatement. 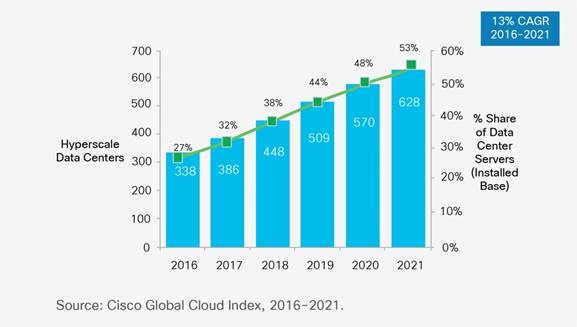 Cloud providers have mostly relied on a centralised data centre approach, with larger data centres located in major regions or cities. As demand for rich media and subsequently virtual reality applications flourishes, edge data centres for content delivery may become necessary to reduce latencies experienced by end users. Moreover, as data sovereignty and security issues come to the fore, governments will require companies to keep data within their jurisdiction. Collectively, this will lead to a need for a decentralised approach, using both domestic and edge data centres to meet requirements. However, given the scale of the demand, even the domestic data centres required could be larger than the existing data centres.

Current data centres are usually not built on the scale that cloud providers will require in the future since there is little point in reserving surrounding land for capacity expansion. In addition, they can typically neither support the higher-density architecture used by most cloud/hyperscale customers nor provide for the low PUE required, even after the refurbishments needed to support hyperscale demands.

In this hyperscale data centre world, the traditional metrics of floor space and the tier certification based on expected availability are no longer valid. Instead, IT workload is the new metric. Hyperscale customers are indifferent on whether the data centre is Tier 3 or Tier 4 certified. Their data centre and application architecture has the redundancy already built in. Their primary concerns are not about availability but about security and expansion capacity.

Specialist data centre providers that cater only to hyperscale customers have arisen. In 2015, AirTrunk, a start-up based in Singapore, was founded to cater to big cloud providers and wholesale buyers rather than co-location customers. It has announced plans for data centres in Australia, Hong Kong and Singapore, and its flagship data centre in Sydney is able to provide 80MW of fitted capacity, which is unprecedented in the Australian market. Together with the Melbourne facility, AirTrunk could provide up to 130MW of capacity; this is very significant, as prior to AirTrunk, the data centre capacity of Australia was estimated to be around 290MW. Despite there seemingly being more capacity than demand, Equinix agreed to buy Metronode (a significant data centre company with hyperscale facilities in Australia) for AUD1.035 billion (trailing revenue multiple of 17 times), primarily on the premise of hyperscale demand. The conventional wisdom of supply and demand suggests that if supply exceeds demand significantly, pricing will collapse, but this is being turned on its head.

Data centres have been attracting a lot of interest from investors with private equity (PE) and infrastructure funds. Data centre contracts with customers tend to be long-tenured with stability in pricing. There is also some customer stickiness as customers would be loath to have to move IT operations. Additionally, the data centre market itself is growing at an explosive pace.

However, we believe that the rise of hyperscale customers will produce a generational shift in the size and type of requirements for data centres. There is a possibility that existing smaller scale data centres may be stranded as enterprises and governments move to the cloud rather than signing contracts directly with the data centres.

Analysys Mason has conducted a number of recent due diligence exercises across the globe on data centres and understands the existing market dynamics as well as the new wave that will probably change the market for years to come. In addition, we have also worked on significant policy on related issues such as data privacy, localisation and security. For further information, please contact Lim Chuan Wei (Partner) at lim.chuan.wei@analysysmason.com.