"The Artemis programme will take us back to the Moon, 50 years after the last Apollo mission."

NASA has twice failed to launch Artemis 1 in the past week. The next attempt will be at the end of September. Artemis 1 is the first launch of the NASA Artemis programme that intends to get people to the moon to exploit lunar resources for scientific and commercial benefit. It has been nearly 50 years since the Apollo mission landed astronauts on the Moon. The Artemis programme is an effort to go back, stay and build an ever-expanding base that is designed to enable astronauts to “explore deep space for the benefit of all”.

A major attraction of going back to the Moon is a return to the glory of exploration. However, ambitions have evolved in the past 20 years due to various factors, including the environmental crisis. Many countries are thinking beyond our planet to the power and resources that are available within our solar system. The initial step of this can be achieved by making the Moon our development ground, just as was done with the deployment of satellites and spacecraft around Earth to reach orbit.

The surface of the Moon represents a good opportunity, given that materials such as oxygen, hydrogen and alloys are present within regolith (the lunar sand). The lunar surface with its thin atmosphere and low atmospheric pressure presents an opportunity to harness the plasma and radiation from the Sun for powering electronics and larger infrastructure. Using the resources that are available on the lunar surface and in its orbit will create petabytes of data that we could use to solve many problems on Earth. To keep this data secure but accessible, a communication infrastructure is needed that improves the way data is transferred and involves satellites and data centres. However, this can only be achieved with significant financial support from governments.

The Artemis launch is the first public demonstration of an ambition to return to the Moon. Artemis 1 is the first output of the NASA Space Launch System (SLS), an independent launch capability that was built for NASA to support the international players and signatories of the Artemis Accords. The SLS effort started in 2010 after the Constellation programme was cancelled after delays and cost overruns. SLS has not done much better. The cost exceeded USD23 billion and the launch was delayed by 6 years. NASA is under considerable pressure to get the programme launched and to produce results. 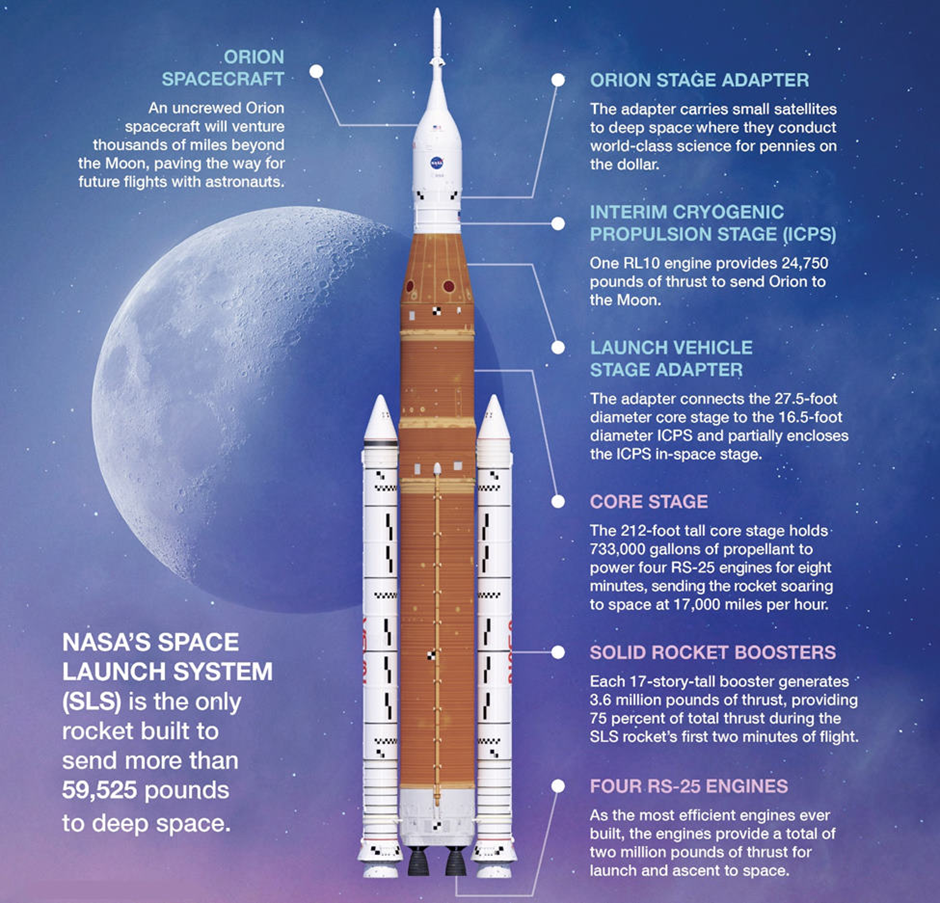 There is good reason to think that the Artemis programme will start a lunar business economy in the next few years; Northern Sky Research (NSR, an Analysys Mason company) forecasts that around 250 missions to the Moon will take place during 2021–2031 and will be worth more than USD100 billion. A larger number of missions depend on the reliability, performance and sustainability of the SLS. There are significant challenges to proving the sustainability of the launch system. Commercial and private companies, such as Blue Origin, SpaceX and ULA, are working with NASA to develop technologies that could be used in rockets to take humans to the Moon.

During the decade that it took to develop Artemis 1, NASA broadened its horizons to begin thinking about how to involve the growing commercial and private sector in developing cheaper, faster and reliable solutions that meet specific requirements and the need for a sustainable Moon market. This began with the Commercial Lunar Payload Services (CLPS) programme to encourage private companies to develop small, medium and large lunar landers to deliver science, technology, communication, robotics and other payloads to the surface of the Moon. To date, NASA has built an ecosystem of 1000 suppliers in the Artemis programme.

Many of these missions and technologies are still under development, and there is a question of how much responsibility will lie with government agencies and how much will be shouldered by private industry. It may be that growing investments from private sources will embolden companies to develop and deploy technologies while building a commercially viable product for Earth-based applications.

The lunar enterprise enabled by the inception of the SLS and future launches of the Artemis programme has created the expectation of new opportunities throughout the value chain. Governments are supporting the development of technologies that support these flagship programmes to return humans to the Moon, and some private and commercial companies are demonstrating new business models and key technologies that may help the Moon market to become sustainable. In spite of governmental support, it is only the testing and deployment of the technologies that will determine whether humans on Earth will reap the benefits of the next step in space exploration.