"Continuing growth in the volume of data traffic and the need for low latency will lead operators to deploy hollow-core fibre networks."

The amount of data carried through telecoms networks is increasing at a rate of between 20% and 30% every year. This is partly driven by the move to next-generation access (NGA) and higher-speed mobile access networks. Hyperscalers and cloud players are also creating new demands for high-capacity core networks between data centres.

In addition to the apparent need for higher capacity over time, specific applications such as high-frequency trading, gaming or augmented/virtual reality (including the metaverse) have very low latency requirements.

Network operators have been addressing the trend of increasing demand by increasing the optical transmission capacity of their fibre networks. Each wavelength is carrying more data, and some networks are using dense wavelength division (DWDM) (that is, more wavelengths per fibre). However, some operators and hyperscalers are reaching the limits of silica-based fibre technology and to meet higher demand will eventually have to light or deploy additional fibres to cope with the demand. An alternative is to shift to radically different optical transmission medium technology called hollow-core fibre.

Optical transmission has revolutionised telecoms by enabling the transmission of terabit per second bandwidth over a single fibre pair over long distances (for example, thousands of kilometres in submarine applications). However, the fibre medium has traditionally been based on fused silica (glass), which has two limitations.

The latency of optical fibre is adequate for most current applications, but some applications are highly sensitive to latency. For example, in high-frequency trading applications, if the signal must travel between Frankfurt and London (700km), and all else is equal, a trader using a fibre-optic system between these two locations will receive the latest stock quotes around 1 millisecond after a trader who uses a microwave transmission system giving the latter an advantage (and indeed microwave systems joining London to Frankfurt in a straight line have been built for this very reason). Systems that cross major oceans or continents face even larger impacts.

The transmission of optical signals over long distances is designed to use the C band and L bands (Figure 1) – the so-called ‘third transmission window’. This is because signal attenuation is wavelength-dependent and the third transmission window wavelength range exhibits the lowest attenuation.2 Up to the L band, the floor in attenuation is dictated by Rayleigh scattering (as light travels in the core, it interacts with the silica molecules and these collisions between the light wave and the silica molecules result in attenuation or loss of signal), which is an inherent property of silica-based fibres. For wavelength in the U Band and above, the attenuation becomes dominated by absorption.

Figure 1: Silica-based fibre attenuation profile as a function of wavelength 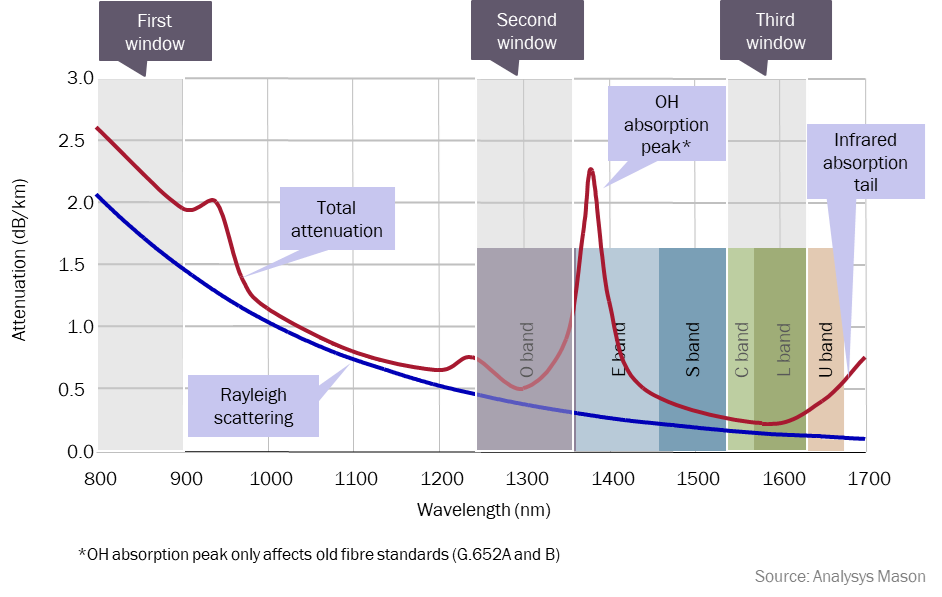 euNetworks, a Western European bandwidth infrastructure company, announced in April 2021 that it had deployed the first hollow-core fibres from provider Lumenisity.3 The link is between Interxion, a data-centre provider and the London Stock Exchange. This was the first commercial deployment of this technology in the world and was part of an agreement covering additional deployments over the coming years between trading venues and other locations.

Comcast announced in April 2022 that it had deployed a 40km hollow-core fibre link in its home market of Philadelphia.4 The fibre provider was also Lumenisity. Comcast tested bidirectional transmission on the same fibre strand at speeds of 10Gbit/s to 400Gbit/s. Comcast says 40km is significantly longer than previously demonstrated hollow-core fibre deployments. Comcast’s core business is residential rather than commercial services, so the most likely benefit of ultra-low latency is supporting gaming or other immersive consumer applications (such as VR/AR) that the metaverse might bring.

1 Some of these spectrum bands are used by coarse wavelength division multiplexing (CWDM) applications but cannot transmit over large distances.

2 Erbium-doped fibre amplifiers (EDFA) have also been developed to specifically operate in the C and L bands to extend transmission reach.

Where next for FTTP?