The world economy is very dependent on the rapid transportation of goods and cargo from one continent to another, and a significant amount of this cargo is transported using containers. The COVID-19 pandemic and the incident in the Suez Canal in March 2021 highlight the challenges that the shipping industry faces. The ports that service these gigantic container haulers must ensure that their operations run smoothly and cost efficiently so that they do not negatively affect the world economy.

The Ningbo-Zhoushan port in China is one of the fastest growing cargo shipping ports in the world. Huawei has worked with this port since 2019 to deliver a state-of-the-art 5G network solution.

The onset of the COVID-19 pandemic in 2020 and the incident in the Suez Canal in 2021 slowed down cargo transportation. These incidents also affected the supply chain as a whole, which led to increased insurance premiums and other container shipping costs. This will ultimately affect the global economy and the end consumer.

Margins in the shipping industry are tight, and risks are high. Shipping companies compete with each other by trying to carry as many containers on each ship as possible. The average number of containers carried per ship has more than doubled in the last 10 years to about 20 000; this is set to grow even further by 2025, which means that larger ships will be required. In addition, the number of ships that pass through the Suez Canal has surpassed 50 per day and is also set to increase further. As such, we anticipate that there will be an increase in the number of jams and other incidents in bottleneck routes, such as the Suez Canal, in the future.

Port authorities are a significant component of the maritime cargo transportation value chain. The growth in both e-commerce activity and the overall global economy will continue to add to the congestion at ports, where thousands of containers must move in and out on a daily basis. This puts the port authorities under increased pressure to improve their end-to-end processes and create efficient operations to meet their customer requirements, deliver results and compete in the global market.

Port authorities are dependent on a large number of cranes, which must operate smoothly

The Ningbo-Zhoushan port in China is the largest port in the world and has had the highest cargo throughput worldwide for the last 12 consecutive years.

Efficiency is the cornerstone of port operations and a large number of cranes and other heavy machinery must run continuously in order to meet targets. Quay cranes are used at the dock to offload and onload containers; other types of cranes, such as rubber tyre gantry cranes (RTGs), then move the containers further along the container yard and onto container trucks or trains to transport them to their destinations. The whole operation must run smoothly to avoid accidents and delays, which could result in additional costs or potential lawsuits against the port authorities.

Airport authorities lease the gates to passenger airlines on an hourly basis to enable passengers to embark and disembark, and to allow the planes to restock and refuel. Ports adopt a similar model. A cargo ship’s time at the port to offload and load new containers is billed on an hourly basis. Inefficient port operations can therefore cost cargo carriers thousands or millions of dollars.

The Ningbo-Zhoushan port operates hundreds of RTGs and thousands of container trucks over a very large area. The RTGs must work in three shift rotations during a 24-hour period, meaning that the port must employ a large number of crane drivers. The drivers face significant challenges and health hazards. They must move around port areas where large and heavy vehicles are in continuous operation in order to reach their posts. A typical crane driver works in a small cabin at the top of the crane, at a height of about 30 meters above the ground. Furthermore, these drivers are prone to injuries (such as neck injuries) due to spending long periods of time sitting in a small place with bad posture. This harsh working environment makes employee recruitment difficult. Comprehensive labour costs such as compensation and insurance subsidies account for a large proportion of port operational costs at traditional ports.

Huawei has been working with the Ningbo-Zhoushan port since 2019. It has used its expertise in 5G networks to transform the port into one of the first smart ports in the world. This included the first integration of 5G with manual RTGs and trucks.

The RTGs were adapted so that they could be remote-controlled by drivers in a central office location, thereby improving the RTG drivers’ working conditions. To achieve this, each RTG was fitted with a programmable logic controller (PLC) and approximately 20 HD cameras. Up to 10 cameras can be used at any one time, resulting in an uplink bandwidth requirement of about 30Mbit/s per crane.

5G delivers the stable low-latency communication that is required to control the RTGs remotely and make the precise movements needed to grab containers. The improved communication and automation that 5G provides quadruples drivers’ efficiency, thereby enabling them to control four cranes simultaneously.

The introduction of driverless trucks was another goal for the Ningbo-Zhoushan port authority due to the lack of skilled drivers to recruit and the high level of fatigue among existing employees (because of the high intensity of the role). To achieve this, each truck was equipped with special, real-time, vehicle-to-everything (V2X) sensors, which enabled the vehicles to respond to their surroundings (such as machinery and lighthouses) intelligently by accelerating, braking, steering, bypassing and parking. The sensors are also able to detect whether a truck is loaded or not. Unloaded trucks can therefore be moved towards an RTG for loading (Figure1).

Such autonomous trucks require a high uplink bandwidth of about 30Mbit/s each, as well as a connection to a network with a latency of less than 20ms. Over 40 container trucks are in operation around the port during peak times, thereby resulting in a total uplink bandwidth requirement of 1200 Mbit/s. 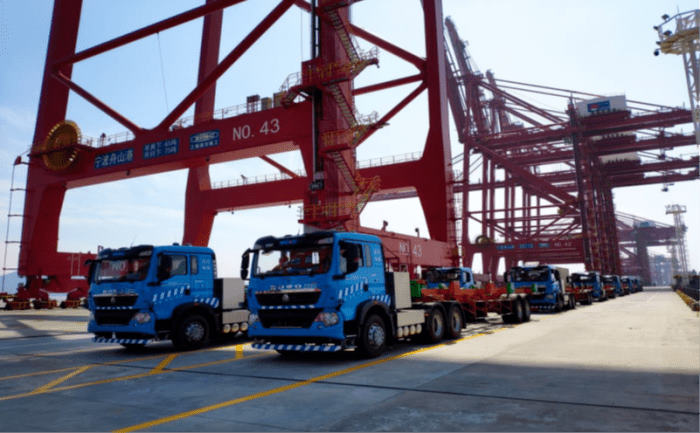 Other 5G network capabilities, such as network slicing, enable specific requirements to be delivered to particular use cases in an agile and automated manner. Mobile edge computing (MEC) applications placed on servers within the port campus will ensure that the data is processed locally, thereby increasing data security and shortening the distances that the data (such as that from cameras, sensors and other applications) has to travel. Shorter distances lead to improved network latency and response rates, which are critical for real-time applications. In addition, the use of consumer premises equipment (CPE) placed in the trucks increases network resilience and improves signal reliability.

The Ningbo-Zhoushan port will be able to achieve significant cost savings once all RTGs and trucks have been equipped with 5G-led automation capabilities. Huawei has also implemented 5G smart port solutions in other large Chinese ports, such as Tianjin, Shanghai, Xiamen, Guangzhou and Shenzhen. Other port authorities around the world can learn from these examples. Similar 5G propositions can also be delivered to other heavy industries, such as coal and steel mining companies, to improve cost and operational efficiencies.

This article was commissioned by Huawei. Analysys Mason does not endorse any of the vendor’s products or services.