Interoperability for satellite communications: is Open RAN the answer?

Targeting the reduction of infrastructure costs, eliminating vendor lock-in effects and accelerating virtualization (do these objectives sound familiar to the satellite industry?), mobile operators have embarked on the standardization of Open RAN. In fact, this is one of the hottest topics in the telecoms industry with major endorsements like the commitment by the four largest European operators – Deutsche Telekom, Orange, Telefónica, and Vodafone Group – to support the roll-out of Open RAN “as the technology of choice for future mobile networks”. The lack of interoperability among satellite VSAT platforms is a historical and well-known issue creating concerns among operators and users. This article by Northern Sky Research (NSR) (an Analysys Mason company) discusses whether an ‘Open VSAT’ standard is feasible, and how the Satcom industry is approaching virtualization, 5G and integration with telcos in the era of Open RAN?

NSR has repeatedly stated this, but it is worth mentioning again; the ground segment will play a central role in unlocking the industry’s future growth through the integration with mainstream telcos, facilitating new use cases and enhancing network scale and flexibility while keeping costs down. The industry might not be paying enough attention to this and continues to put the focus on constellations with prohibitive terminal costs, VHTS with high gateway investments, or software-defined satellites that are constrained by the rigid ground segment. The ground segment will generate USD147 billion during 2020–2030 in cumulative revenue according to NSR’s Global Satellite Ground Segment, 6th Edition report, an opportunity that cannot be ignored. But even more importantly, it is the entry point for the industry to continue its expansion.

Open RAN is a concept (TIP’s OpenRAN and O-RAN Alliance are the leading bodies) that aims at developing telco infrastructure with “multi-vendor interoperable products and solutions that are easy to integrate in the operator’s network”. Open RAN puts a strong emphasis on virtualization aiming at creating a network architecture based on “open hardware and cloud, with embedded AI-powered radio control”, getting rid of proprietary hardware and closed ecosystems. Among the key advantages of this approach are circumventing vendor lock-in, fostering technological innovations including AI/ML, CI/CD, SDN/NF, supply-chain diversity, or promoting competition and innovation at every component of the network stack. In fact, the FCC has also focused on Open RAN with security and U.S. leadership in 5G in mind in order to find alternatives to Chinese vendors Huawei and ZTE.

Greenfield operators such as Dish and Rakuten were among the early adopters of Open RAN. But this is really taking off now with 38 deployments with operators as of May 2021 (GSMA), commonly incorporating multiple vendors per deployment, and even the Tier-1 vendors Nokia and Ericsson are joining the Open RAN concept. Open RAN is designed to solve similar issues to those that the satellite industry is facing today, specifically interoperability, scalability, flexibility and virtualization, so it is worth analyzing if Satcom could adopt the model.

Interoperability has been on the wish list for many in the satellite industry for decades. Users in verticals like aero or telcos are particularly concerned about satcom’s closed ecosystems given the high switching costs. But the truth is that segments like consumer broadband that are dominated by vertical and closed ecosystems drive the vast majority of satcom modem revenue with little incentive to adopt open network standards.

One would expect operators and service integrators to push for this interoperability. In the terrestrial world, new entrants have been the actors accelerating Open RAN. The approach has been totally different in satcom with the likes of Starlink, Amazon or OneWeb promoting closed and tightly controlled networks.

The dynamics are not much more favorable among the traditional operators. Satixfy has been recently selected for Telesat Lightspeed terrestrial network of 288 landing stations. While Telesat partnered with a third-party vendor, the peculiarities of the network including proprietary control, beam hopping and onboard processing, required the development of purposely engineered modems. It is a similar scenario for SES. Even though Gilat and ST Engineering iDirect will be developing the core infrastructure for SES O3b mPower, the modems will need to interface with ‘SES’-differentiated ARC capability. So not only do these operators avoid promoting open interfaces, they are likewise pushing vendors to customize their technologies for their own networks. Thus, the industry seems to be going in the opposite direction of ‘Open VSAT’.

Not all is lost for interoperability

Integration can happen at different network layers and with different approaches/architectures and, in fact, the industry is putting a lot of effort in becoming interoperable with terrestrial networks. Telesat recently joined MEF to “enable members to seamlessly integrate with the Telesat Lightspeed network” where MEF standards define technology-agnostic, multi-operator, automated networks inter-connectivity. SES is working on creating “an open, standards-based network automation and service orchestration platform, built on ONAP”. Similarly, Intelsat continues investing in its 5G Software-Defined Network with the ability to “orchestrate across edge, satellite and core”. Operators at this stage seem to be putting the emphasis on achieving interoperability with mainstream telcos at the core network level. While this is a fundamental step and opens extraordinary opportunities by making satcom easier to adopt, it misses key advantages of the Open RAN vision. 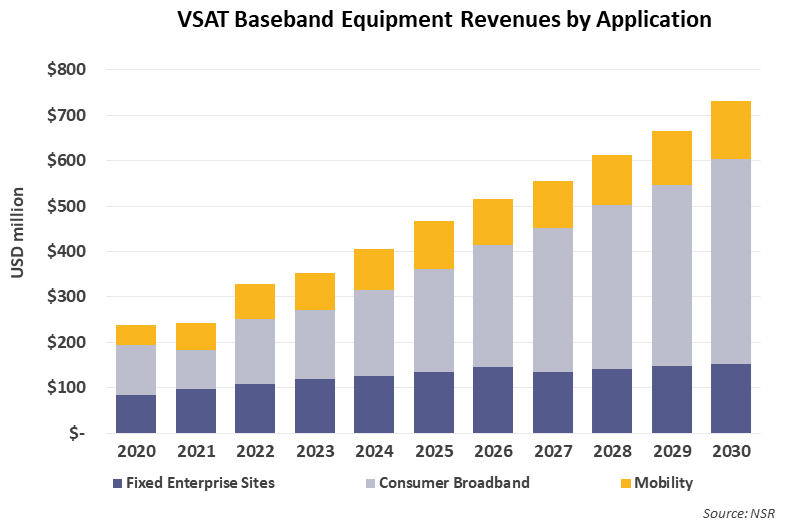 There is certain progress as well in the definition of interoperability standards for the physical layer, for hardware and data links. Particularly remarkable is the DIFI Consortium with the mission to “enable the digital transformation of space, satellite, and related industries by providing a simple, open, interoperable Digital IF/RF standard that replaces the natural interoperability of analog IF signals and helps prevent vendor lock-in”. It is far from the ambition of an “Open VSAT” ecosystem but starting at the RF interface is a logical first step in this long-term journey.

Another avenue to emulate interoperability could be virtualization and software-defined modems. In recent times, multiple operators are pushing the ecosystem to develop universal modems upon which each platform could load its specific software-defined waveforms and networking tools. iDirect’s partnership with Microsoft Azure Space to “leverage the Azure software radio tools to enable our satcom solutions through the Azure cloud platform” is just the first announcement on a big industry trend taking shape.

A shift in the role of satellite operators

Today’s satellite operator NOCs are a nightmare. Imagine an operator running multiple platforms on its satellites, each vendor such as Gilat, Comtech, iDirect and Hughes with their own network management software. On top of that, billing tools for a fragmented chain of partners such as Speedcast or Marlink, again each using different tools. And then, the end customers, the largest of them pushing to interface with their own orchestration systems such as Telefónica or Orange as examples. Satcom definitely needs to do a better job at standardizing and building commonalities.

As discussed above, operators are building their own ecosystems with greater integration with players that include Telesat Lightspeed, SES mPower and Intelsat, suggesting the beginning of a shift in their roles in the value chain. Now, operators are taking a bigger responsibility for defining network elements rather than letting those issues be contained inside equipment vendors. This pushes operators to be more tech-savvy. Curiously, it seems as if satellite operators were taking the challenges of Open RAN integration without getting the advantage of it such as scale, lower costs, vendor diversity and standardized integration, although the focus for them now again is telco integration.

The satellite industry has differentiated elements that might hinder the evolution of an Open RAN approach like smaller-scale, long-term cycles or key actors directly competing for the same customers. Of note is that AT&T, MTN, Telefónica and Softbank have very different footprints making collaboration easier among MNOs. But perhaps the largest barrier is internal from the satellite operators themselves as they still see their ‘uniqueness’ and differentiation based on technology, hence they are reluctant to fully embrace open standards.

Apart from vertically integrated operators, almost all in the industry are using the same vendors in space and ground, and access to space is getting easier and cheaper as proven by disruptions like Astranis. So, infrastructure/technology is not the differentiator among operators. Yet they seem to be unable to find a common ground to standardize interfaces to gain economies of scale and foster innovation. While initiatives like the DIFI consortium point to the right direction, the satcom industry is at least 5 years behind its terrestrial counterparts in the promotion of an Open RAN-like ecosystem.

The vision of ‘Open VSAT’ makes a lot of sense for the industry to achieve scale, introduce vendor diversity, foster innovation and ultimately facilitate the adoption of satcom and grow the industry. Common standards for waveforms already exist. DVB-S2X is used by virtually all vendors, but each of them undertakes their own adaptations that kill interoperability. It is the responsibility, and in the interest, of operators and service providers to push for this interoperability. Perhaps a lesson learned from the terrestrial world is the creation and the willingness to collaborate with a body like 3GPP to enforce common standards.