In September 2015, the United Nations Member States unanimously adopted the new 2030 Agenda for Sustainable Development, outlining a plan of action to end poverty, reduce inequalities and protect the environment. As part of this agenda, Sustainable Development Goal 9c (SDG 9c) recognises the important role of Internet connectivity through the commitment to “strive to provide universal and affordable access to the Internet in least developed countries (LDCs) by 2020”.

This is a challenging ambition: at the end of 2015 only about 10% of the 900 million people living in LDCs had access to the Internet, compared to a developed market average of 82%. Globally only 43% of individuals are online, leaving 4.1 billion people unconnected.1  Progress to increase connectivity has been steady over the past decade, with 200 to 300 million more Internet users each year. On current trends however, over 3 billion people will remain unconnected by 2020.

Analysys Mason recently contributed to the State of Connectivity 2015 report published by Facebook as part of its Internet.org initiative. The report, launched by Mark Zuckerberg at Mobile World Congress in February 2016, discusses new insights into the four key barriers to connectivity, which relate to:

These barriers are interconnected in nature and many people are affected by all of them, especially in developing countries. To effectively address the barriers to connectivity will require a solid understanding of their scale and drivers, and this relies on robust and accurate data.

The State of Connectivity 2015 report highlights new data from Facebook, as well as analysis of third-party data carried out by Analysys Mason to provide new insights into the barriers. Some summary statistics are shown below. 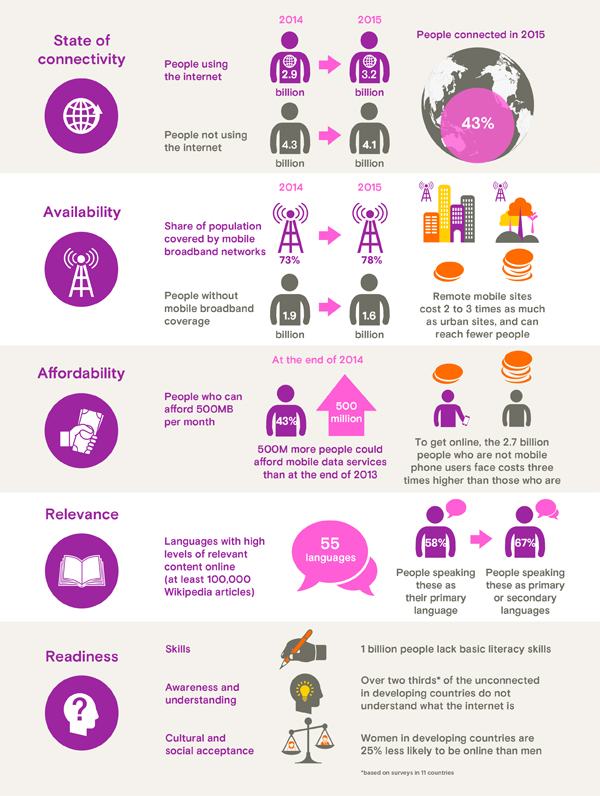 1 Proportion of individuals who have used the Internet in the past three months, ITU Measuring the Information Society Report 2015