Ethiopia is one of the few telecoms markets worldwide that still operates under a monopoly. Government-owned Ethio Telecom (Ethiotel) controls Ethiopia’s mobile market, as well as the fixed telephony and fixed broadband markets, and the international gateway. This monopoly has resulted in an underdeveloped telecoms market: as of the end of 2018, only 42% of Ethiopians have a mobile phone, and only 14% have mobile broadband, which is low compared with other countries of a comparable size within the region, including Egypt, Sudan, Tanzania, Kenya and Uganda (see Figure 1). However, the government in Ethiopia has recently captured the wider attention of the global telecoms industry through its many initiatives to expedite the liberalisation of the telecoms market and to modernise the local telecoms infrastructure. This article discusses these initiatives in more detail.

Figure 1: Comparison of mobile SIM and mobile broadbroad penetration in Ethiopia and in neighbouring countries, 2018

Mobile SIM penetration of the population and mobile broadband take-up in Ethiopia are both low compared with other developing countries worldwide, and these trends are driven primarily by high mobile tariffs and the country’s poor network coverage (see Figure 2). While 2G networks are widely available in Ethiopia (99% population coverage), 4G coverage is restricted to the Ethiopian capital of Addis Ababa.

Figure 2: Mobile ARPU and annualised tariff for 1GB of data as a percentage of GDP per capita, 2018 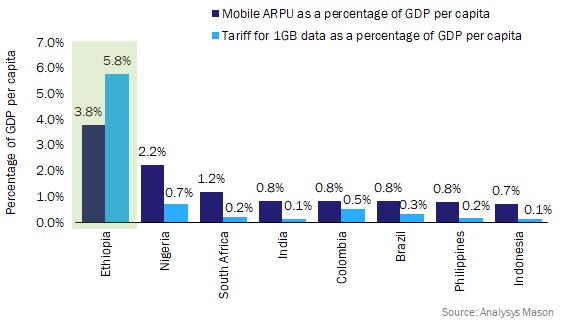 Ethiopia’s telecoms market is opening up to outside investment, with interest from regional and global telecoms groups

However, Prime Minister Abiy Ahmed declared in June 2019 that Ethiopia will privatise and liberalise its economy to spur competition in several critical sectors, including telecommunications. The World Bank is also supporting the government in Ethiopia with implementing these institutional reforms. The Ministry of Finance has recently clarified that the government will adopt the following strategies to liberalise the telecoms market and open it up to foreign investment.

Many regional and global telecoms group across the value chain (including operators such as Etisalat, MTN, Orange, Viettel and Vodafone) have already expressed an interest in bidding for these licences. This liberalisation of the telecoms market is expected to introduce competition to the market and help address the key challenges around high tariffs and low mobile SIM and broadband penetration.

The liberalisation of Myanmar’s underdeveloped telecoms sector could serve as a useful predictor of how successful similar changes will be in Ethiopia. When the government in Myanmar liberalised the telecoms sector in 2013, mobile SIM penetration accelerated from 10% to 99% and mobile broadband penetration increased from 3% to 67% within only 4 years. Liberalisation paved the way in Myanmar for reduced prices and increased mobile SIM penetration and higher international bandwidth.

Most of the major operator groups are likely to consider the investment opportunity in Ethiopia – either to acquire a stake in Ethio Telecom or to deploy greenfield operations. When assessing this opportunity, operators will need to carefully consider how the legal/regulatory environment is likely to change, as well as understand the demand characteristics and the other challenges of this market.

Analysys Mason has built a solid track record of successfully supporting market entrants and can assist in assessing the Ethiopian opportunity and identifying the key success factors for entering this untapped market.

COVID-19: retail and manufacturing SMBs will drive the shift to cloud-based invoicing applications