"5 years may seem to be sufficient time for Arm to deliver IoT revenue growth ahead of returning to the public market, but many of its growth initiatives will take much longer to come to fruition."

IoT devices represent a significant new revenue opportunity for Arm and its ecosystem. Indeed, the company believes that a trillion IoT devices will be produced by 2035.1 Arm has become SoftBank’s vehicle for innovation and revenue growth in IoT since its acquisition in 2016, and SoftBank has provided Arm with the resources to capture a large share of the predicted trillion-device opportunity.

SoftBank signalled its intention to re-list Arm within the next 5 years in July 2019. Arm must make progress to deliver on its strategy to target new revenue growth areas for its device IP in order to attract future investors. It has made several significant investments to extend its IoT activity within its core IP business where it is targeting sectors such as the automotive sector, as well as in new areas of the IoT value chain such as connectivity, device and data management. It is too early for these initiatives to have had an effect on the core business revenue, but Arm has a long-term vision to capture a large share of the emerging IoT market.

Arm has been able to invest heavily in acquiring the engineering talent and technology that is required to support its revenue growth strategy in multiple emerging fields such as IoT and machine learning thanks to being a private company owned by SoftBank. Arm has increased its headcount by 50% since the acquisition, and the R&D spend grew from 22% of the total revenue in 2015 to 42% in 2018 (Figure 1). As a result, margins decreased sharply from 54% in 2015 to 15% in 2018. Arm is sacrificing short-term profits to position itself for the longer-term opportunity. 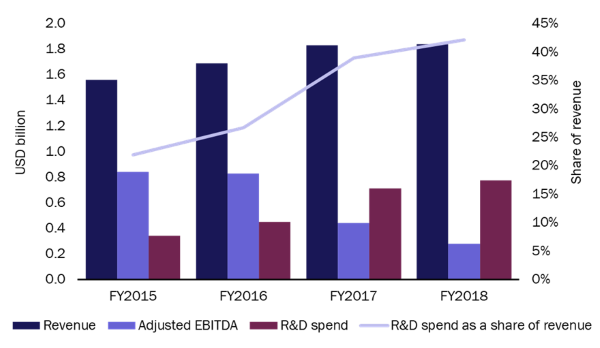 Arm’s IoT solution has evolved through acquisition and internal development

Arm Mbed OS is a free, open-source IoT operating system with more than 425 000 third-party developers that makes it easy to develop IoT devices. Arm has developed its own SIM solutions that it markets under the brand name Kigen, and it is already building support for eSIMs on its Pelion IoT platform. SIMs will become an integrated part of the cellular chipset in the future (iSIMs), and Arm’s ultimate goal is to simplify cellular adoption by creating cellular hardware (chipsets and modules) that is ready to connect with an already provisioned bootstrap subscription. iSIMs will provide a new source of revenue for Arm’s device IP and security and IoT services portfolio and will enable billions of cellular and LPWA connections.

Arm is extending its IP into diverse areas of the value chain to exploit opportunities in IoT, 5G, AI and other key verticals

CEO Simon Segars opened Arm’s TechCon2019 event with the company’s vision for the fifth wave of computing: the convergence of AI, IoT and 5G.2 Segars also highlighted the accelerated adoption of computing devices, “it took 25 years for the first 50 billion chipsets … but only 2 years for the second 50 billion”. Arm is developing hardware and software IP in key areas such as the automotive sector, cloud and networking infrastructure and machine learning to ensure that it is in a strong position to benefit from the fifth wave of computing.

Arm made the following related announcements at the event.

Arm has the financial resources and support of a powerful parent company to enable it to build and deliver solutions for IoT, 5G and AI in the long term. The current and future enterprise demand for these solutions is uncertain, and indeed, many providers’ IoT revenue has grown more slowly than originally anticipated. Nonetheless, there is still a need to build the early market, create an awareness of the benefits of these solutions and deliver proof points to showcase them. 5 years may seem to be sufficient time for Arm to deliver IoT revenue growth ahead of returning to the public market, but many of its growth initiatives will take much longer to come to fruition. The challenge for Arm may be to demonstrate that it has made sufficient progress to attract new investors.

1 Arm (2017), The route to a trillion devices. Available at: https://learn.arm.com/route-to-trillion-devices.html.