Spectrum in the 26GHz band will be important, but its value remains uncertain


"It is currently challenging to value spectrum in the 26GHz band because of the uncertainties surrounding commercial use cases, the scale of the market demand and related deployment costs, but it is possible."

Regulators in EU member states were mandated to award at least 1GHz of spectrum in the 26GHz band for mobile use by 31 December 2020 by an EC Implementing Decision.1 Most regulators will not meet this ambitious timetable and the COVID-19 pandemic may further slow the process, but they (and mobile operators) must still work to value the appropriate spectrum ahead of any awards. Such valuations are important, despite the inherent difficulty, to allow regulators to understand how much spectrum to allocate and how best to assign it, and to enable operators to assess how much to pay.

Price benchmarks provide some useful indications of spectrum value in other bands. However, there is a very limited number of relevant benchmarks for mmWave spectrum (including the 26GHz band) from prior assignments for mobile broadband use. These are summarised in Figure 1.

Figure 1: Prices for recent spectrum awards in the 26GHz and 28GHz bands, normalised first by ‘MHz/pop’ and then by population only (‘/pop’)2 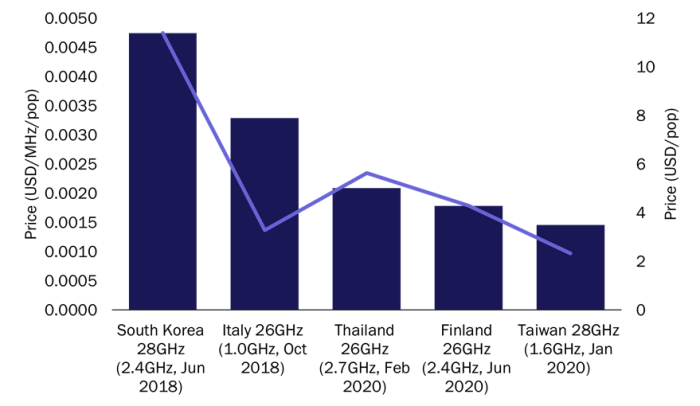 In several cases, spectrum was sold at close to the reserve price (for example, in South Korea and Italy), so care should be taken when using benchmarks for mmWave spectrum because they may not reflect the full valuation of the bidders. It is also not yet clear how best to normalise the benchmarks. There is still some uncertainty over the target use cases and their bandwidth requirements, so a simple normalisation by population may be as appropriate as the often-favoured ‘per MHz per member of the population’ (/MHz/pop) metric used in traditional bands for mobile use. This difference in normalisation metrics could lead to quite different conclusions about spectrum value in a given country, as Figure 1 suggests.

Spectrum value is generally considered to be determined by the savings that can be made in network costs as a result of deploying the spectrum (‘technical value’) and by the commercial performance improvements that are realised due to improved network performance (‘commercial value’). In the past, technical value has often been the biggest contributor to spectrum value. However, commercial value is becoming increasingly important, particularly in Western Europe.

Spectrum in the 26GHz band can also be valued by assessing the technical value and the commercial value, though the estimation of each component still presents challenges.

The cost-effectiveness of a 26GHz small cell solution will depend on the cost differential relative to the deployment of additional macro sites, or the relative costs of using other spectrum bands or technology upgrades.

These cost differentials depend inherently upon the cost of deploying 26GHz small cells, which remains uncertain. One simple example (and we note that there are many other technical approaches) considers 26GHz outdoor small cells that are co-located with existing macro sites and that use existing towers and backhaul. This removes the complexity for MNOs of having to find additional sites and backhaul for street-level small cells. This may limit costs, but such an approach also constrains the maximum traffic that the 26GHz band could divert away from the main macro network due to its relatively short range.

The 26GHz band is likely to be added to the sites on the network that carry the most traffic (subject to physical constraints and/or planning permission) and is limited to addressing only the fraction of the traffic that is located in the centre of each such macro cell. We would therefore expect that most commercial deployments will initially occur in dense urban areas, extending to suburban areas over time; future deployments will be tailored to the geographical demand for capacity.

Commercial value may be considerable in the future, but it is uncertain at present, so is best viewed as a potential upside

The contiguous bandwidth offered by the 26GHz band is unprecedented and is expected to enable a number of novel commercial use cases. Commercial value could arise from several sources, including through value added services resulting in an increase in ARPU, through attracting an increased share of subscribers interested in high quality of service of a type that only mmWave spectrum can provide, or through new services resulting in new revenue streams (such as AR/VR users). Additionally, if operators can use the 26GHz band to provide fixed-wireless services to business customers, there is a potential to capture a higher share of mobile connections from businesses (alongside this fixed traffic), which tend to have a higher ARPU.

The value of 26GHz spectrum will become more tangible as the device ecosystem evolves and use cases become clearer. In the meantime, valuation can focus on the quantifiable aspects of the cost-savings that 26GHz deployments are likely to provide by effectively relieving macro networks of a portion of their increasing traffic levels, with a range of potential commercial upsides.

The uncertainty surrounding potential use cases means that it is difficult to gauge what constitutes a ‘sufficient’ bandwidth. The way in which spectrum valuations translate into auction prices is a function of the relative supply and demand (among other things). The amount of contiguous bandwidth made available for award in the 26GHz band is therefore likely to impact the price of the spectrum in a given market. However, scarcity is unlikely to be an immediate problem given the large amount of spectrum in the band, assuming that most or all of the 26GHz spectrum is made available for nationwide licences. Operators are likely to focus on contiguous blocks of at least 200–400MHz in order to enable initial commercial deployments. However, greater bandwidths may be desirable to some operators, which could lead to scarcity if a substantial portion of the 26GHz band was not made available for MNOs (for example, through reservations for private networks). Regulators should therefore carefully consider the total bandwidth to be awarded, alongside reserve prices and other parameters of an award, to ensure that value uncertainties do not compromise a 26GHz award or otherwise limit the potential benefits of this spectrum.

Analysys Mason offers services including spectrum valuation and auction support, as well as advice on business planning and spectrum management issues, to operators and regulators around the world. For more information about our services, please contact Mark Colville, Janette Stewart or Gentiana Shiko.

2 Normalising to a licence duration of 20 years, assuming a 6.0% WACC and adjusting to 2020 real terms; ALFs are included where applicable.

Large enterprises’ demand for communications and IT services: survey results 2021