"The ISPs and telecoms operators should recognise what they do best: operating network infrastructure that is secure and resilient and offering great reliability and customer service to end users."

An old idea has had a resurgence in recent months: internet content and application providers (CAPs) should pay for the privilege of delivering traffic on internet service providers’ (ISPs’) networks to meet their end users’ requests. This is the set-up in South Korea,1 but interconnection and traffic delivery are left to commercial negotiations between ISPs and CAPs nearly everywhere else in the world. Sometimes these players agree to exchange money as well as traffic, but in most cases, everyone pays their own costs based on their individual incentives.

This has led CAPs to construct their own networks from a combination of owned and rented infrastructure in order to be able to deliver traffic in major cities around the world, in places where ISPs can easily interconnect and expand capacity (such as internet exchange points) and in data centres where ISPs and CAPs can peer privately with one another. Large CAPs also make caches available to enable ISPs around the world to store CAPs’ content directly in their networks. Via these mechanisms, ISPs can avoid having to buy IP transit or international connectivity to another country (particularly the USA), and CAPs can control the cost and quality of their services up to the boundary of the ISP’s network, which benefits their common users. Smaller CAPs (and some large ones) use commercial content delivery networks (CDNs) to facilitate this activity, and now often use public cloud services, who themselves make data centre and networking infrastructure available to their customers worldwide.

We estimate that CAPs worldwide invested a total of USD883 billion in infrastructure (including hosting, data transport and content delivery) between 2011 and 2021 (Figure 1). About half of this investment occurred between 2018 and 2021; investments averaged USD120 billion each year during this period. We also estimate that these investments have enabled ISPs to save over USD5 billion per year, based on analysis that Analysys Mason conducted with Netflix in early 2022. 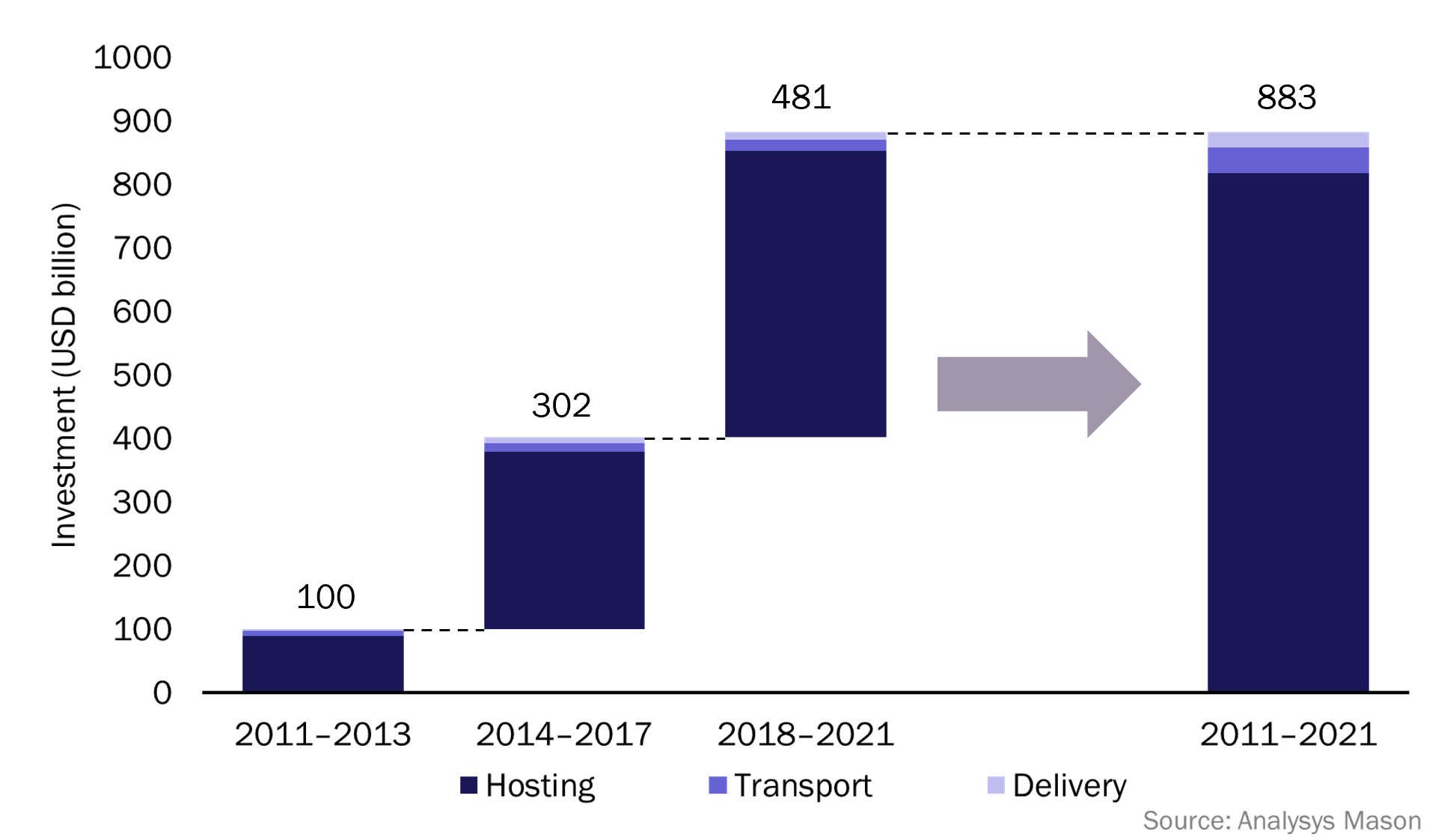 This organisation of traffic delivery on the internet has worked very well and has supported growth in the scale and scope of online services that many of us use daily. The COVID-19 pandemic illustrated the importance of the internet for working, studying and staying connected, as well as the need for internet infrastructure that is resilient and scalable in order to cope with spikes in demand. Overall, everything worked better than expected, and there is some evidence that access to meaningful broadband connectivity actually saved lives during the pandemic.2

This illustrates powerfully that there are clear synergies at play between connectivity and content. Access to business support systems, productivity software and online communications apps, all of which are increasingly hosted on public cloud platforms, is what allows people to work remotely. The same sort of applications, when used by schools and universities, enable students to continue learning at home. Online streaming and gaming keep many of us entertained and sustain growth in the audio-visual and gaming industries.

These synergies drive the demand for better connectivity. The results of Analysys Mason’s consumer survey show that users of more-advanced online services, including streaming and gaming, already subscribe to faster broadband packages than those that do not use such services and, crucially, are more likely to upgrade their connections to faster speeds when available (Figure 2).

Figure 2: Correlation between the use of advanced services and broadband speeds, developed Asia–Pacific (DVAP), Europe and the USA, 2021 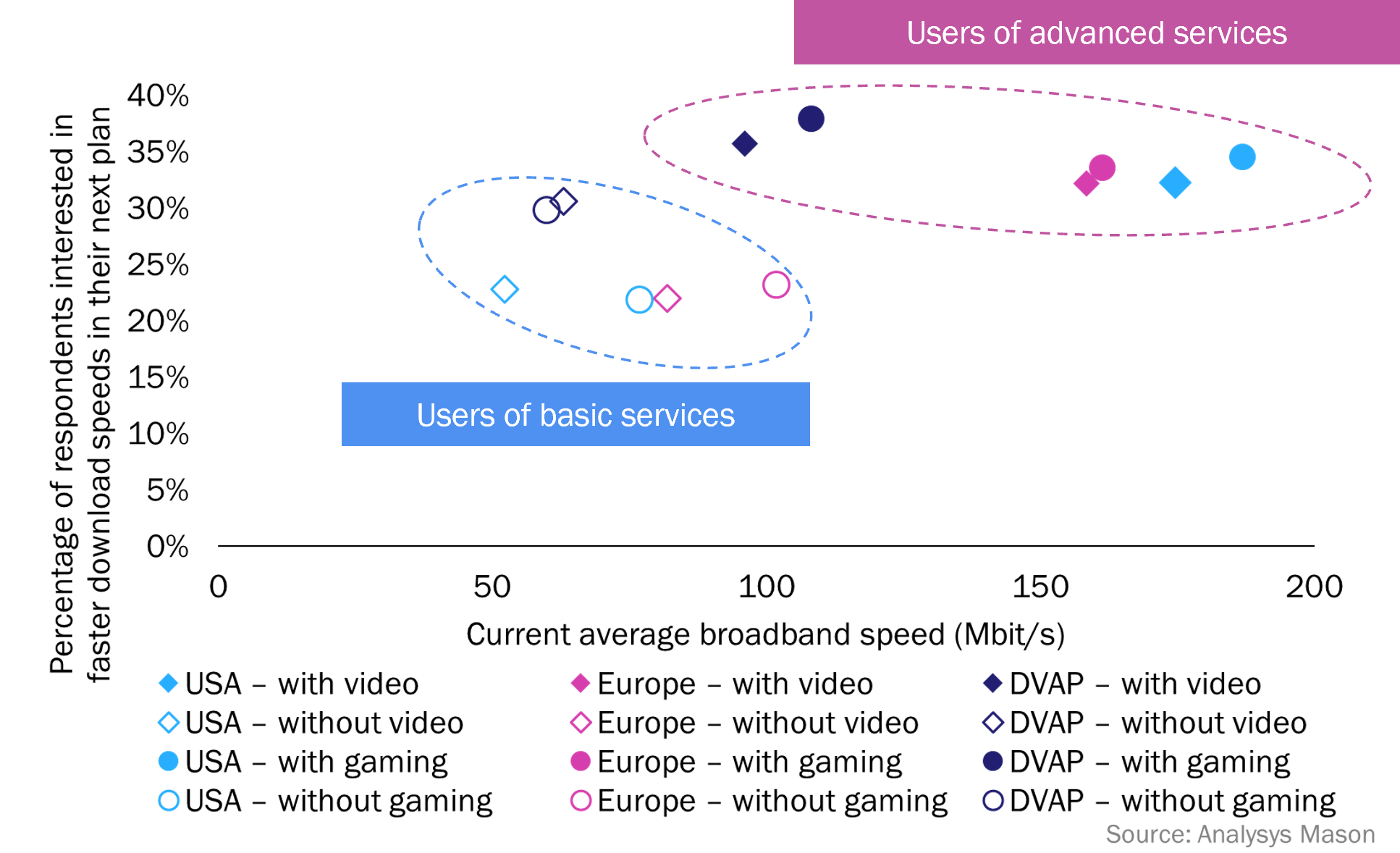 These trends are crucial for the success of gigabit-capable networks worldwide; people will upgrade to fibre and 5G either because it is cheaper than what they currently have or because it will improve the service quality in ways that are meaningful to them (by providing them with access to new services, for example). ISPs are understandably keen to maintain their revenue, particularly in the current macroeconomic climate where their costs are likely to go up. They should therefore focus on making networks work for the next wave of services, be they metaverse, cloud gaming or industrial services.

Some ISPs have been sketching out a vision in which they are both connectivity providers and service providers as part of their efforts to get regulators and policy makers to mandate CAPs to pay them to deliver traffic. This model was very successful for ISPs with telephony and cable TV, but it is far removed from what consumers and businesses expect from the internet today.

Regulators and policy makers should carefully consider the potential impact of imposing fees on the wider internet ecosystem (which includes consumers, businesses and public sector organisations that rely on an open internet without bottlenecks or ‘toll roads’ to work, play, study and stay connected) when assessing and responding to calls for fundamental changes to how the internet works. Indeed, in our recent work, we found that network usage fees risked creating barriers to entry and growth for smaller and new CAPs, thereby reducing efficiency and competition and lowering the quality of experience for end users.

Perhaps more importantly, the ISPs and telecoms operators who are currently clamouring to be paid by CAPs should recognise what they do best: operating network infrastructure that is secure and resilient and offering great reliability and customer service to end users. The recent boom in investments by digital infrastructure funds, which shows little sign of abating, is a sure sign that this is where the value lies, not in making the internet smaller, more complex and potentially more expensive.