"Increasing cord-cutting coupled with difficulties in reducing costs present a challenging outlook for pay-TV operators – they must ‘futureproof’ their TV business models."

The arrival of over-the-top (OTT) video services such as Netflix and Hulu first raised the possibility of ‘cord-cutting’, as the availability of more affordable OTT video content posed a potential threat to large traditional pay-TV bundles. The extent of cord-cutting initially appeared to be limited, but there is now evidence that it represents a sustained trend in some developed markets, leading to a continuing decline in the number of pay-TV subscriptions.

There has been a steady decline in pay-TV subscribers in most mature markets over the past 2 years, as shown in Figure 1. The two Asian markets (Hong Kong and Singapore) have seen a particularly significant drop in pay-TV subscriptions since the beginning of 2015 – up to 4% in the first year and 9% by the second. 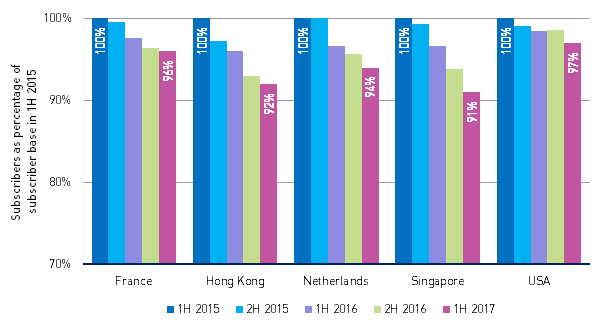 This decline in pay-TV subscribers is not only expected to continue, but also to accelerate. There are several factors driving this trend.

Attractive content is therefore increasingly available over alternative platforms at more affordable prices than those of traditional pay TV. This is likely to lead to further cord-cutting across pay-TV markets and a subsequent decline in traditional pay-TV revenue.

Declines in both pay-TV subscriber numbers and revenue require a corresponding decrease in operating costs if pay-TV operators are to maintain their current profit levels. Content is generally the largest operating cost item for pay-TV operators. However, existing content contracts (at least for premium content) typically involve fixed lump-sum payments or high minimum guarantees, both of which will reduce pay-TV operators’ profitability when subscribers and revenue decline. We understand from our interviews with pay-TV operators that negotiating for discounts on premium content contracts has proved to be extremely challenging. Content providers have growing demand from new large digital distributors, which are ready to pay significant amounts for these rights – in some cases several times what traditional operators pay. The providers therefore see no need to offer discounts. For example, Comcast has repeatedly stated in its financial reports that it “[expects] that [its] programming expenses will continue to increase, which may negatively impact [its] operating margin”, suggesting that even large operators are finding it difficult to maintain or reduce content costs.

The cost of broadcasting infrastructure is another component (beyond the cost of content) that often does not scale with revenue and subscribers. Investments in satellite transponder capacity for DTH operators and in terrestrial multiplex capacity instead scale with the number and quality of channels. Pay-TV operators will have to invest more in broadcasting infrastructure to support the transmission of 4K channels, as 4K TV penetration and the availability of content for these channels increases. This investment will be increasingly difficult to justify in an environment where revenue is stagnating or declining. Fixed network broadcast infrastructure for cable and IPTV operators scales more directly with subscriber numbers (or rather, premises passed), but also does not provide flexibility in terms of cost savings to adjust for lost revenue.

Operators must refocus their traditional pay-TV strategies to pivot to OTT and revamp business models, both in terms of revenue and cost

The expected reduction in pay-TV subscriber numbers, coupled with the corresponding difficulty in reducing associated costs, presents a challenging outlook for operators’ traditional pay-TV businesses. Profits are likely to face significant downward pressure. Operators must consider innovative revenue and cost initiatives to sustain their traditional pay-TV businesses in a declining market, as well as considering moving into OTT TV and video services. Possible initiatives operators could adopt include:

In summary, innovation and partnerships will be key for operators to successfully compete in the new OTT TV and video market by offering attractive content, flexible pricing and the integrated experience consumers now expect. Pay-TV operators must adapt quickly as they are competing against innovative and fast-moving players, such as Amazon, Netflix, Viu and YouTube TV.

Analysys Mason has extensive experience in working with pay-TV operators on a broad range of issues, including business planning, platform strategy, content optimisation and regulatory support. We have previously published discussions on live TV OTT2 and the impact of IP on broadcasting.3 For further information, please contact Dion Teo.

3 For further details, see Lluís Borrell’s presentation from the IBC2017 conference Is IP really having an impact on broadcasting?