"Network overbuild can make or break the business case for fibre investment, and operators must consider the various regulatory, commercial and technical factors at play; the best defence may be an effective wholesale strategy."

Both incumbents and altnets are rapidly deploying FTTP

Fibre-to-the-premises (FTTP) coverage in Western Europe reached 43% of households in 2020, up from just 17% in 2015, and operators across the region are continuing their race to reach the remaining households. Incumbent operators have taken a clear lead in some countries such as France and the Netherlands, while in other markets – including most countries in the Nordic region – alternative network operators (altnets) have been quicker to build networks. 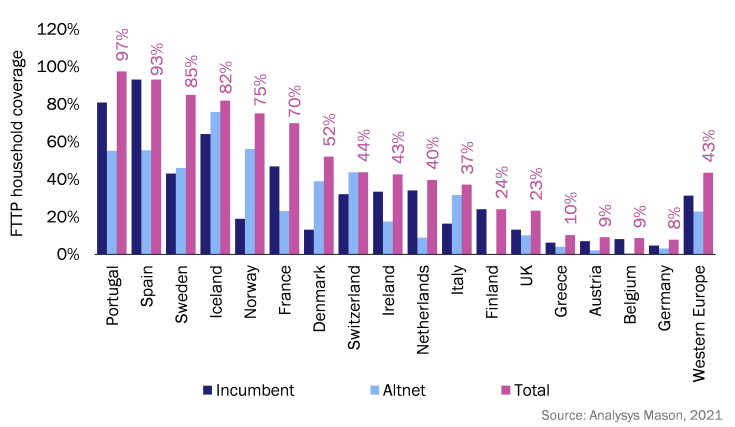 The number of fibre network roll-outs across Europe is increasing and as each competing roll-out progresses, we are seeing growing levels of network overbuild in many markets. The economic case for deploying multiple parallel networks depends on several factors including network deployment costs, revenue potential per customer, market structure, wholesale arrangements and regulatory factors.

Altnets across Europe have typically aimed to maximise customer take-up on their network through a variety of strategies including targeting areas that they can reach ahead of incumbents and prioritising areas that are considered to be at lower risk of future overbuild. Different geo-demographics and differing regulatory conditions have, however, led to considerable disparities between European countries, as outlined below.

In Spain, regulatory decisions regarding wholesale access to Telefónica’s FTTP network, coupled with low capex requirements, has incentivised altnets to overbuild the incumbent. This means that around 65% of the premises passed by FTTP in Spain now have coverage from more than one network.

Some altnets are focusing on rolling out fibre in rural areas where high costs reduce the risk of future overbuild, especially in publicly subsidised areas that, by definition, should not be commercially viable for others to follow. However, this approach still poses some risk because European State aid rules mandate that wholesale access is provided via new passive infrastructure such as ducts and poles, which could improve the economics for a future entrant.

Incumbents’ appetite for fibre overbuild can vary significantly between countries

Incumbent operators typically have a more-compelling reason to overbuild a first-mover altnet: to protect their significant market share at both the wholesale and retail level. Where altnets are first to reach an area with fibre, incumbents are left with broadly three choices: continue selling over copper-based or wireless networks despite the competition from a superior network technology; overbuild the altnet with their own FTTP network; or take wholesale services from the altnet (if these are available). A variety of approaches is being taken in different countries, as discussed below.

Openreach, the infrastructure division of UK incumbent BT, signalled that it favours the overbuild approach by announcing in May 2021 its intention to increase its FTTP coverage target from 20 million to 25 million premises (over 80% of the UK). This announcement comes at a time when over 100 altnets are competing in a ‘land grab’ across the UK, and some have argued that Openreach’s increasingly ambitious targets could be posturing designed to scare off altnet investment. However, Openreach’s plans are supported by a rapid acceleration in the pace of its fibre deployment.

The low level of fibre coverage in Germany is comparable with that of the UK, but Deutsche Telekom (DT) has taken a different approach to that of Openreach and plans to avoid overbuild, instead working with altnets through co-investment and wholesale partnerships. At its recent capital markets day Group CEO Tim Höttges asked, “Why should we overbuild somebody? If they have already built fibre, why can't we embrace them into our infrastructure?”. The German incumbent has stated that it plans to build its own FTTP to 60–70% of households but will consider wholesale access elsewhere, supported by existing agreements with Deutsche Glasfaser and NetCologne. The alternative case for overbuild is made challenging in Germany due to current capex requirements outside of dense urban areas of over EUR1000 per home passed, more than double that expected by Openreach in the UK.

Altnets in Sweden and Norway have covered a large share of their respective markets and have achieved strong take-up. Both incumbents are now implementing plans to decommission their copper networks, which no longer enable them to compete effectively. Telia in Sweden has formed wholesale agreements with many altnets and by switching off copper, it will be exiting the infrastructure market in these areas to focus on protecting its retail market share. Telenor in Norway does not have this option because most municipal fibre networks have exclusive partnerships with retail service providers, so in areas where it is not economic to overbuild with FTTP, the company is instead focusing on providing fixed-wireless access (FWA) services using its 4G and 5G networks.

Many incumbents across Europe are overbuilding altnet fibre, especially in commercially attractive urban areas. Altnets with a strong wholesale offering are generally at lower risk of overbuild than retail-only operators, partly because they have signed up major ISPs (which reduces the wholesale revenue opportunity for an incumbent), but also because altnets provide the incumbent with a wholesale alternative to overbuild. The provision of wholesale access at the passive level (for example, dark fibre rather than just bitstream) by altnets can be a more-attractive proposition for incumbents.

Many altnets are willing to compete in areas where cable networks exist because these are generally managed by retail-only players and although network performance is faster than VDSL, it is inferior to that enabled by FTTP (at least at the very high end above 1Gbits/s). While cable networks have an incremental upgrade path (most operators in Europe are now upgrading to DOCSIS3.1 to enable 1Gbit/s download speeds, with longer-term roadmaps towards DOCSIS4.0 and beyond), fibre players are quick to point out that their technology roadmap should enable them to stay a step ahead of cable network performance (although upgraded cable networks may still be able to keep up with typical end-user needs, cable providers will not want to enter a ‘peak speed war’ against technology such as XGS-PON).

However, this very fact is driving a growing number of cable operators to overbuild their own coaxial networks with FTTP, as already announced by Euskaltel in Spain and Tele Columbus in Germany, among others. Wherever cable networks exist today, there is good chance of a cable player emerging as another FTTP competitor in the long term. The timing of this trend will vary depending on local market factors and cost drivers: for example, the CEO of Liberty Global claimed on its June 2021 earnings call that due to its duct ownership in the UK, the cost of upgrading to FTTP (using XGS-PON equipment) would not be meaningfully higher than DOCSIS4.0.

Analysys Mason’s expertise in the fibre sector means that we can help our clients to assess and forecast overbuild, and to develop strategies to mitigate the associated risks. The threat of overbuild means that getting wholesale strategies right is increasingly important for altnets and incumbents, and we have deep understanding of the economics of the different kinds of wholesale services. For further advice, please contact Richard Morgan.

Where next for FTTP?