"Each telecoms market is unique, with a set of unique characteristics."

Each telecoms market is unique. Each one has a unique set of characteristics that defines them and makes them different from each other.

A good way to understand the competitive dynamics of the market is to understand the structure of, and the connections between, the retail telecoms market and the upstream wholesale markets. Such an analysis can be useful for operators as well as for the regulators and policymakers that have the power to influence these market structures through interventions such as licensing, ex-post competition rules, and via access and interconnection rules (which may also be influenced by ex-ante regulation).

A comparison of the telecoms markets of the countries in the Gulf Co-operation Council (GCC) in the Arabian Gulf illustrates the diversity of structures that can exist within neighbouring countries as a result of path dependency; each has evolved differently since the markets were liberalised in the 1990s, thanks to a series of market entries, consolidation, vertical separation, technological evolution and changes in the value chain.

For instance, a comparison of the fixed broadband markets of Bahrain, Oman, Saudi Arabia and the UAE reveals significant differences that ultimately drive:

More specifically, Figure 1 compares the market structures in the four countries, and highlights that:

Figure 1: Comparison of fixed broadband market structures in selected countries in the GCC 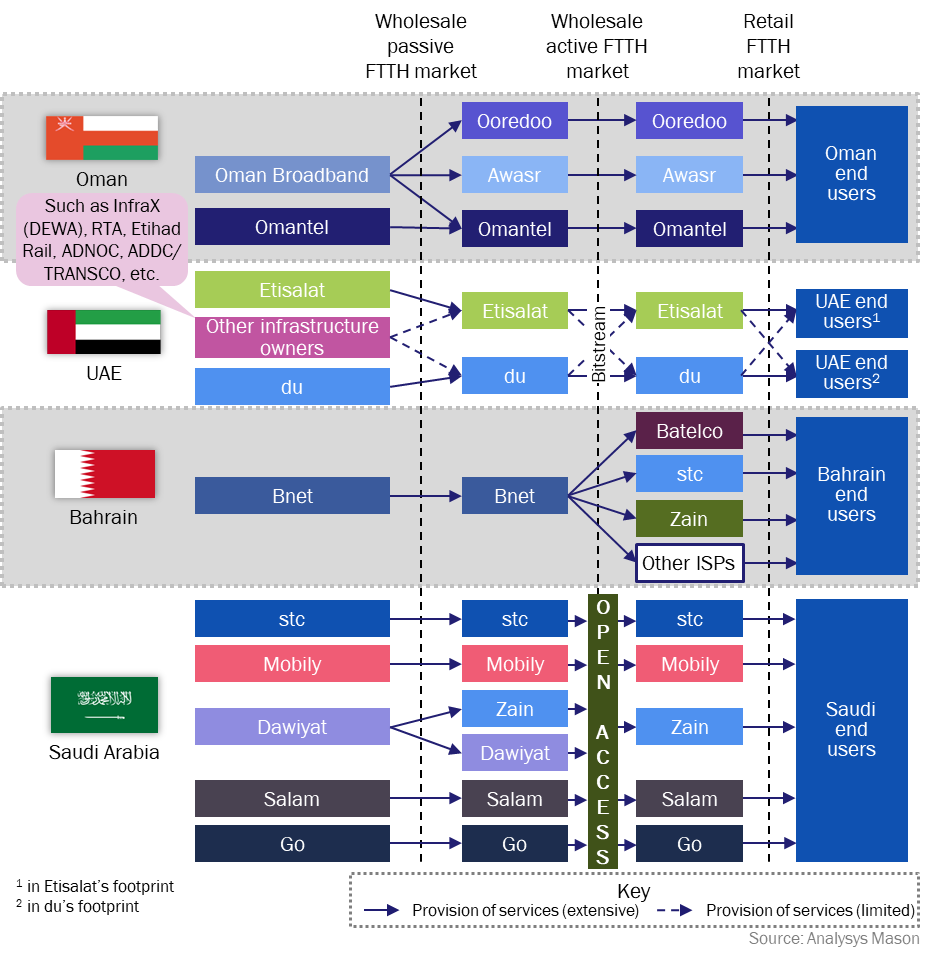 Keeping the structure of these markets in mind, it is also possible to evaluate these markets against some desirable policy outcomes, such as:

We have assessed the four countries according to these policy outcomes (Figure 2).

Figure 2: Assessment of selected countries in the GCC according to policy outcomes

It can reasonably be argued that the actual market structure for each country is a result of the overall policy and regulatory framework of that country (including the licensing framework and competition law). The market structures do not necessarily explain fully each of the outcomes presented in Figure 2, but they have an impact on these supply- and demand-side policy outcomes. Therefore, they deserve the fullest attention of regulators and policymakers.

Finally, one should also consider that any policy intervention that is aimed at altering these outcomes by changing the market structure can take a long time to play out and, as per the principle of path-dependency, they are not reversible, and thus need careful crafting. For instance, it is still too early to conclude unequivocally on the effect of the single-network policy in Bahrain (which has led to the foundation of BNET) and the impact of the “open-access” framework in Saudi Arabia, given that their full implementation is ongoing.

Analysys Mason has supported operators and policymakers to understand the competitive environment that they operate in, and shape/discuss the relevant policy for the evolution of licensing, competition and interconnection frameworks. For more details, please contact Johann Adjovi in our Dubai office.