Emergency services depend on robust and secure communications services to perform their all-important tasks of saving lives and protecting society. Most European countries have established dedicated communication networks based on TETRA technology to meet the special needs of the Public Protection and Disaster Relief (PPDR) community. These narrowband networks are built for efficient voice communication in groups, but have limited data capabilities. As broadband data access rapidly becomes a necessity for PPDR users, governments in many countries are faced with the challenge of how to establish emergency communications for the coming decades, and how to make best use of the economies of scale and scope that are available in commercial mobile technologies and networks.

The 3GPP family of standards has recently specified new features sought by the PPDR community, including Mission Critical Push To Talk, Mission Critical Video, device-to-device communication and several others. This opens the path towards next-generation PPDR networks built with standard mobile network equipment, with associated benefits related to costs, availability and innovation. Authorities in many countries are now looking at how a PPDR network based on 3GPP technology can most efficiently be implemented, taking the special requirements for coverage, availability and security into account.

Some countries, notably Sweden, are considering whether a dedicated, state-owned PPDR mobile network should be established, citing security and government control as the main motivation for this approach. Other countries are looking at models that use existing commercial mobile networks as a basis for a PPDR service. This normally involves strengthening the robustness and security of these networks, and implementing new functionality required by emergency services. Norway, the UK (ESN) and the USA (FirstNet) are examples of countries that have chosen this approach. The commercial models, and the level of government involvement, vary significantly between these countries.

When selecting a PPDR network model, most authorities will start from the functional and quality-related requirements of the users. A PPDR network must be robust, secure and have the coverage and capacity to provide mission-critical broadband services, such as real-time video communications, when and where they are needed. However, PPDR authorities must also consider a range of other questions and priorities, related to cost, level of government control, competition and accountability. Analysys Mason has advised both regulatory authorities and mobile operators in questions related to next-generation PPDR networks. We have identified four different generic operating models, which we believe form a good starting point for a discussion around next-generation PPDR networks in many countries.

The generic models vary in terms of robustness, operational complexity and impact on competition. Models that use several networks to implement PPDR services can potentially be more robust than the ‘single commercial network’ model, which uses only a single mobile network.

Analysys Mason has worked extensively on cost-benefit analyses of different models in several markets. As a general observation, we believe that a PPDR network based on commercial mobile networks can achieve at least the same quality, security and robustness as a dedicated network. However, the four models vary in terms of cost. We estimate that a state network will be several times more expensive than commercial alternatives depending on requirements for robustness and security. In addition to the high cost of establishing a new radio network, a state-owned network will require significant financial and human resources to maintain PPDR services at a level that matches user expectations. Driven by competition and a larger customer base, commercial operators invest large sums in new functionality and improved quality in their networks every year. Experience from several countries shows that is hard to maintain the same investment level over time in a network that relies on public funding. 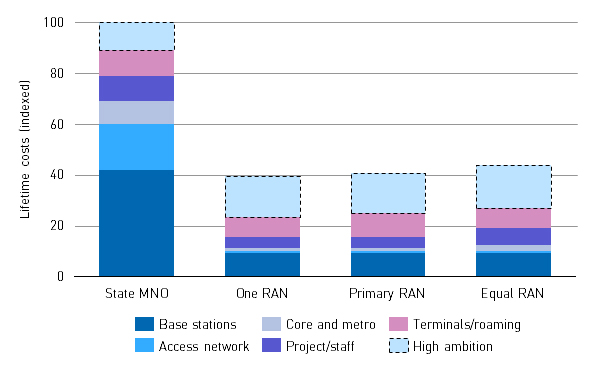 The best model for next generation emergency network will depend on specific requirements and the mobile market situation in the specific country. Given the large cost differences illustrated above, governments and mobile network operators (MNOs) should develop a clear strategy for how existing mobile networks can best be used to develop a robust and sustainable solution that will serve its ultimate purpose – to support the security and well-being of the population.

Governments should start preparations for selecting the most appropriate model for their country. Analysys Mason has worked extensively on cost-benefit analyses of different models in several markets, and can offer expert advice about, and in-depth analysis of, available options.

5G and beyond: evolving 5G business models to 6G