Comparative analysis of outcomes in the UK broadband market: coverage, connections and competition 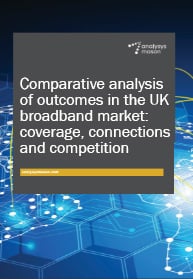 The UK is expected to continue to lead the EU's five largest economies on a range of fixed broadband measures in 2020, according to a new report by Analysys Mason.

The report compares the outcomes of the UK broadband market with key benchmark countries including the 'EU five' (France, Germany, Italy, Spain and the UK), Portugal and Sweden, as well as the two developed economies that have structurally separated their national wholesale and retail providers - Australia and New Zealand.

Analysys Mason found that the UK is expected to continue to lead the 'EU five' when it comes to availability and take-up of superfast broadband (classed as 30Mbps and above) in 2020.

More about the report findings

By 2020, the UK is expected to be second in the 'EU five' for superfast infrastructure competition. In terms of performance today, the UK leads the 'EU five' in terms of average speeds and is top of all countries studied for the availability of speeds of at least 10Mbps.

The report also finds that the UK is expected to perform better in many areas than Australia and New Zealand, where structural separation has been implemented, and despite a much greater intensity of public funding in these countries.

When it comes to ultrafast speeds (classed as 100Mbps and above) the research found that the availability in the UK is expected to increase from 50 percent to 85 percent over the next few years, with an expectation of being second in the 'EU five' by 2020.

The debate over the future of the UK's digital infrastructure is fierce, and the report brings crucial analysis to ensure that the debate is well informed.

"The fact is that the UK generates very good outcomes on all key broadband metrics, in part due to the regulatory approach taken to date. That performance is expected to improve if companies deliver on their plans to invest in rolling out superfast and ultrafast networks," explains Matt Yardley, Partner, Analysys Mason and report co-author.

The report does cast doubt however over whether a third ultrafast network reaching 40% coverage of UK premises (overbuilding two existing networks) is an economically plausible scenario.

Analysys Mason's conclusion is based on a rigorous analysis of the UK's current wholesale access regime, level of competition, population density, low proportion of people living in apartment blocks and customer willingness to pay.

The analysis considered the economic viability of a third FTTP operator, concluding that "it is highly unlikely that a third operator will be able to reach 40% (FTTP) coverage on a commercially viable basis".

The UK has a highly competitive broadband market, but our economic modelling suggests that encouraging a third separate network to invest in covering more than 5-10 percent of the country will be extremely difficult to achieve.

The research was commissioned by BT and entitled "Comparative analysis of outcomes in the UK broadband market: coverage, connections and competition". It is an update of benchmarking research that BT has been commissioning regularly since 2012 to verify that the UK is performing well on connectivity compared to other nations.

The comparative analysis of the UK's broadband infrastructure was conducted in the context of Ofcom's Strategic Review of Digital Communications and in response to Ofcom's stated ambition for a third Fibre-To-The-Premises (FTTP) Network to cover 40% of premises in the UK. 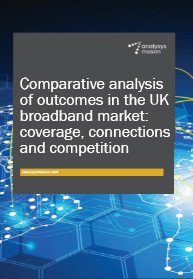 This white paper discusses the issues facing the utility industry, and using insight from other technology sectors offers some advice on how to address them.

Operators have an opportunity to deliver SD-WAN to more than 3.5 million SME sites