IP interconnection on the internet: a white paper 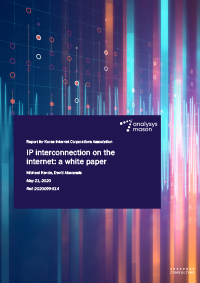 Korean policy makers are proposing to impose charges on interconnection arrangements between internet service providers (ISPs), which we argue can result in increased costs and latency for Korean end users when accessing their favorite content and services, including Korean content. The internet is a global network of networks – including commercial, academic, research, and government networks. Interconnection is the glue that holds these networks together. Internet interconnection is commercially negotiated, rather than regulated, and has been since the internet was commercialized in the 1990s. Allowing these arrangements to be negotiated has enabled them to adapt to all the industry changes that have taken place over the past 20 years. The imposition of regulated interconnection charges in Korea runs in contrast with this established practice.

Internet interconnection arrangements have adapted themselves to the emergence of high-bandwidth video content delivery that predominates today. This has been possible because the arrangements are commercially negotiated, and thus able to evolve rapidly and organically. For example, content delivery networks (CDNs) emerged to deliver content closer to users. The first CDNs were independent companies that managed the content for third-party content providers. More recently, large content providers began to develop CDNs for delivering their own content.

CDNs bring content closer to receiving ISPs, which lowers the costs for the ISPs and improves the quality of service for their end users. This is true regardless of whether CDNs are independent or part of a content provider. The development of CDNs involves installing caches to hold popular content (particularly video), points of presence (PoPs) where CDNs can peer directly with ISPs, and even building subsea cables between continents and countries, in order to deliver content to PoPs and caches. These investments are a response to commercial incentives to change business models and negotiate interconnection arrangements that improve access to content for end users.

In general, internet interconnection has not been regulated. In contrast with this approach, South Korea has been exploring regulated network charges between ISPs, which would require payments based on the volume of traffic delivered to an ISP. Such a move could result in additional costs for content providers with a local presence, or they could decide to only make the content available outside the country, thus increasing the cost of accessing the traffic for South Korean ISPs. Either way, the possibility of regulation and ambiguity about how it will be imposed has had a negative impact on content providers’ investments in South Korea. Furthermore, internet interconnection would be less efficient than the commercial outcomes in other countries, and it would impose increased costs and latency on South Korean end users with no mitigating benefit.

The internet has undergone significant changes since its commercial beginnings in the 1990s. In addition to remarkable growth rates, the internet has globalized from its historical roots in the US, the volume of traffic associated with content has grown exponentially, and content providers have begun to deploy their own networks to deliver the content to end users worldwide. The one constant has been that commercial negotiations, rather than regulation, have driven the changes in the interconnection arrangements, to the benefit of users of the advanced internet ecosystem. In South Korea, the need for regulation is unclear, the benefits so far not realised, and the costs all too visible in the form of a lower quality of experience for consumers.