"Operators in sub-Saharan Africa, Latin America and emerging Asia–Pacific have been actively working to deploy 5G networks, but this work could be quicker if regulatory barriers were lowered."

According to the latest version of Analysys Mason’s 5G deployment tracker, 20 operators worldwide commercially launched 5G networks (Figure 1). An additional 62 operators are either planning their networks or are expecting to launch by the end of 2022 or at the start of 2023. Most 5G network launches between 2019 and 2020 took place in Europe and developed Asia–Pacific. However, from 2021, operators in sub-Saharan Africa (SSA), Latin America and emerging Asia–Pacific (EMAP) have become increasingly active, despite regulatory barriers that have hindered deployment. To date, a lack of regulatory clarity regarding the price and availability of additional spectrum for 5G services has forced delays and the withholding of investment decisions in these regions. 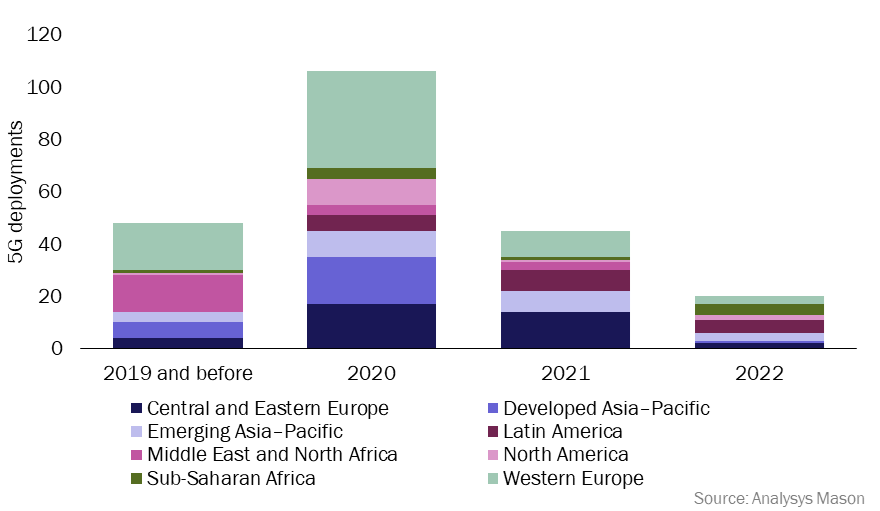 Operators in SSA are increasingly planning and trialling 5G networks

Most operators in SSA have prioritised 4G network investment and the region had just six commercial 5G networks in 2021. Large parts of SSA are affected by a lack of clarity regarding long-term licensing of 5G spectrum bands and spectrum prices, which has hindered 5G development within the region. However, countries such as Réunion, South Africa and Zimbabwe have since made progress with deploying 5G. Compared with other operators in SSA, South Africa has reasonable amounts of legacy 2G and 3G spectrum that can be re-farmed to 5G technology, and this has influenced the speed of deployment.

Examples of commercial launches in SSA include the following.

Operators in SSA have also been planning and trialling 5G networks in preparation for commercial launch. Examples of this include the following.

These 5G trials have demonstrated the technical competence and eagerness of the operators to launch 5G services and how operators have been proactive in building vital relationships with 5G equipment manufacturers.

The investment in standalone 5G networks has been relatively slow; just 29 operators launched a 5G SA commercial network between 2018 and 2023. This corresponds to just 10% of the total 5G deployment activity worldwide in this period. However, we do expect operators to continue to deploy 5G standalone core networks because they unlock the capabilities needed to support new traffic and service demands, such as network slicing and multi-access edge computing. Most standalone networks have been launched in developed Asia–Pacific (Figure 2) and most of this activity occurred between 2019 and 2021. Until now, the business case for deploying 5G SA networks has been weak, particularly in Europe, because operator ARPU has increased minimally after launching 5G services. 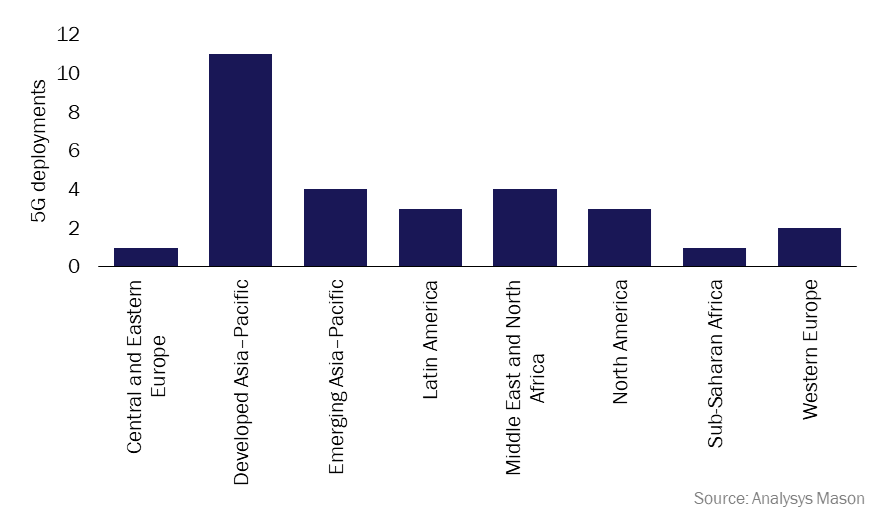 Countries in Asia–Pacific, including China, Japan, Singapore and South Korea, account for most of the 5G standalone networks deployments. Other significant 5G standalone deployments worldwide include the following.