"AT&T’s decision to outsource its 5G mobile network cloud to Microsoft will act as a catalyst for the adoption of public cloud provider (PCP) cloud stacks by other operators."

On June 30, AT&T and Microsoft announced a strategic alliance that involves the transition of AT&T’s 5G mobile network to Microsoft’s Azure for Operators cloud, starting from the 5G core. As part of this deal, Microsoft will acquire AT&T’s Network Cloud technology and engineering team, which will help the public cloud provider (PCP) to advance its Azure for Operators cloud offering by incorporating AT&T’s intellectual property and technical expertise with its acquisitions of Affirmed Networks and Metaswitch Networks.

The two companies have been working in close collaboration since 2019, which included moving AT&T’s IT workloads to Azure and developing a go-to-market partnership for network edge compute (NEC) services. In addition, AT&T has been a major customer of Affirmed Networks using the vendor’s packet core and orchestration solutions. The new deal for the 5G core adds to the series of recent mobile network-centric deals between operators and PCPs such as Dish’s vRAN and Swisscom’s 5G core announcements with AWS. However, AT&T’s decision to abandon its in-house cloud efforts and outsource its mobile network cloud to a PCP is the most significant to-date because the operator has been one of the main pioneers of network cloud transformation and has a strong influence on the direction of the industry. We expect this will be a catalyst for accelerating the adoption of PCP cloud stacks for 5G networks by other operators.

Operators’ network cloud journeys began much earlier than 5G but progress has generally fallen short of industry expectations in terms of openness and operational speed and simplicity. Some large, advanced operators, including AT&T, attempted to build their own, multi-vendor network cloud platforms, but they ran into major integration, orchestration and automation complexities and costs. The mainstream market has continued to procure virtualised networks from traditional suppliers in the form of pre-integrated single vendor stacks. However, the lack of interoperability between vendors’ solutions has created new cloud-based silos.

Many operators have ambitions for new 5G, edge and network slicing-driven service opportunities but having the right network cloud platform in place to create and deliver these services will be critical to achieving these ambitions. The technological shift to cloud-native and multi-cloud architecture is driving the use of PCP cloud platforms to the top of the 5G investment agendas of a growing number of operators that hope to get superior cloud technology with fewer hurdles by adopting public cloud infrastructure. Most of the advanced operators that we interviewed recently as part of our Cloud Transformation Benchmark study revealed that they are either planning to evaluate, or are already evaluating, PCP stacks for their 5G standalone (SA) core networks, public edge clouds and to lesser extent, vRAN clouds. Similarly, many network function vendors, both traditional and new entrants, are moving quickly to integrate their software with PCP IaaS/CaaS offerings in response to RFIs and RFPs that expect them to work with PCPs.1

This growing demand for PCP clouds will have a significant impact on the network cloud value chain and investments. It will not only redefine the relationships that operators have with PCPs and traditional vendors but will also change competitive dynamics between the incumbent telecoms vendors and PCPs, and the latters’ share of network cloud investments in future.

Analysys Mason forecasts that network cloud investments by operators will reach USD32 billion by 2025. In the light of recent operator announcements and our interviews, we have developed a high-level forecast of the opportunity for PCPs in the network cloud market (Figure 1). 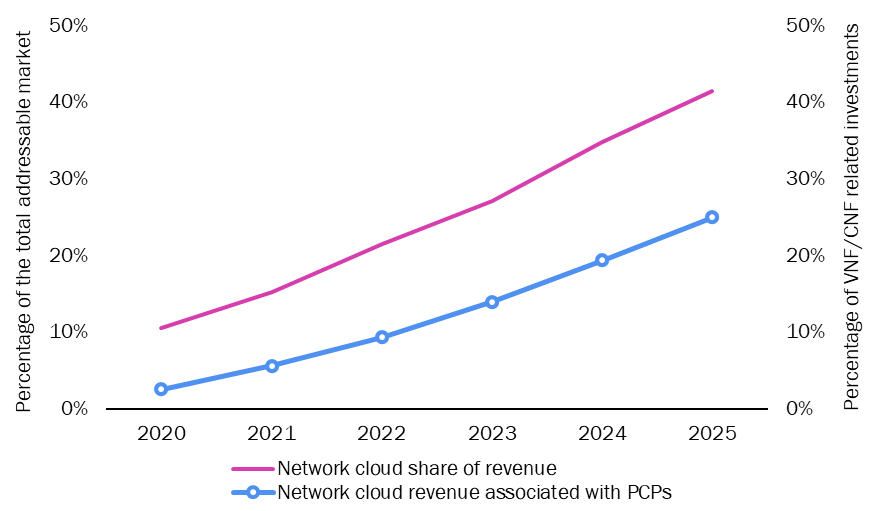 We estimate that around 25% of the operator mobile network cloud spending (VNF/CNF software, IaaS/CaaS and hardware) might be associated with a PCP cloud stack, mostly on-premises versions of these PCP stacks or hybrid architecture rather than traditional, centralised public cloud offerings. 5G core, especially cloud-native SA, are likely to be the main functions that move to PCP cloud networks first. We also expect that there may be a small shift from existing 4G mobile core network functions such as vEPC, vIMS and others (for example, PCRF and SDM). However, these are not top priority for cloud-native transformations today so they will remain largely on existing OpenStack/VIM-based clouds for a long time. As operators move to converged core architecture from 2023 or 2024, they could start to move these legacy functions to PCP stacks too.

The cloudification and disaggregation of RAN is a work in progress. vRAN has specific requirements for a real-time kernel, hardware acceleration and distributed workload placement and orchestration at remote sites at scale. Meeting these requirements will take time and effort on the part of vRAN vendors and their partner PCPs, therefore the use of PCP cloud stacks in vRAN deployments is likely to gain more traction during the next 2–3 years.

Operators are now at a critical stage of making decisions about their 5G cloud networks, and advanced operators such as AT&T are signaling a major shift to PCP cloud platforms. The initial experiences and outcomes of these early operator and PCP partnerships for cloud networks will be key to determining the way 5G and edge networks, and supplier ecosystems, will be built and shaped.

Dish is no Rakuten, as its AWS announcement illustrates

What is edge computing and why is it important?