"Many fixed broadband operators still have the opportunity to reduce churn."

Churn reduction is an important element of fixed broadband operators’ strategies. There are limited opportunities to attract first-time broadband subscribers in highly penetrated markets and churn reduction can also remove the need for costly subscriber-acquisition campaigns. Operators need to understand how their churn rates compare to their peers’ and which factors result in lower churn. In this article, we draw upon Analysys Mason’s Fixed broadband churn metrics to analyse the drivers for different operators’ fixed broadband churn rates. 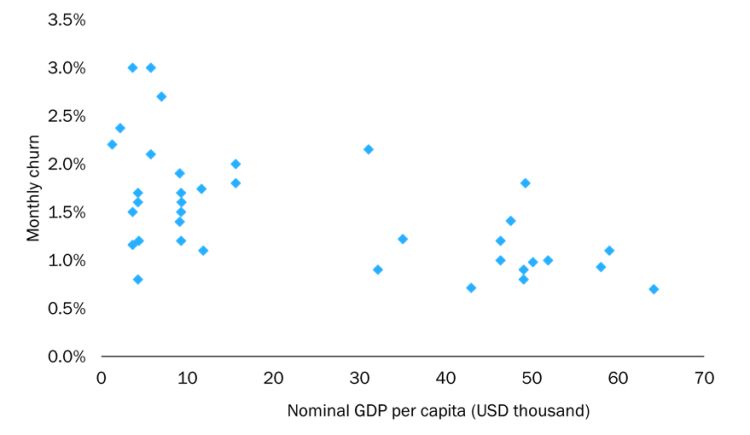 It should be noted that fixed broadband churn in North America is higher than that in other developed markets. Indeed, fixed broadband churn was 1.8% in Canada between 2015 and 2019, though there are some variations between operators. These high churn rates are likely to be at least partly due to high retail prices, which drive customers to switch.

Retail market competition is a key driver of churn

Churn rates are higher in markets with high levels of competition and a wide choice of retail service providers, all other things being equal. However, these correlations are far from perfect. For example, the USA has high churn rates even though consumers tend to only be able to choose between the incumbent and a cable provider. Moreover, some markets with reasonably high levels of competition (such as Hong Kong, Singapore and Japan) tend to have low levels of monthly churn (below 1%).

Churn rates generally fell due to the COVID-19 pandemic, but they have they now returned to pre-crisis levels in many markets

Fixed broadband churn rates fell significantly during the first wave of lockdowns in Europe in the latter part of 1Q 2020 and 2Q 2020. Indeed, operators in many Western European markets typically saw decreases in churn rates of around 20% year-on-year in 2Q 2020. However, churn rates have now generally returned to pre-crisis levels. Fixed broadband net additions boomed during the pandemic in many emerging markets, but we have yet to see any increases in churn for new, first-time fixed broadband subscribers. However, this may be because the impact of the pandemic continues to be felt (for instance, in terms of increased home working).

Contract length has a significant impact on fixed broadband churn

Contract length can have a marked effect on churn in developed markets. 2-year contracts are the norm, though there are a range of no-fixed-term contract offers in Canada and all of Verizon’s FTTP plans in the USA have been available with no fixed term since the start of 2020. 2-year contracts are uncommon in emerging markets due to lower incomes, and fixed-term contracts may even be completely unavailable in some markets, particularly in Latin America. Some subscribers may also take prepaid fixed broadband.

Operators in emerging markets need to find a balance between having a sufficiently long contract length to limit churn and ensuring that the contract length does not prohibit subscriber take-up. Telekom Indonesia has implemented a minimum 1-year term and mandates that subscribers pay a 1-month subscription fee deposit when they sign up; this has successfully reduced churn. Indeed, a 1-year contract with a set-up/installation cost of 1–2 times the entry-level regular monthly fee provides the right balance for fixed broadband operators in many emerging markets.

Many fixed broadband operators can make it easier for subscribers to pay bills; this is likely to result in a reduction in churn. Telecom Italia notes that the percentage of its fixed customer base that uses direct bill payment increased by 7 percentage points between 1Q 2020 and 1Q 2021, and that almost two thirds of its fixed customers use direct payments. It believes that this has contributed to the decline in quarterly fixed-line churn from 4.7% in 1Q 2020 to 3.6% in 1Q 2021. Direct debit payments are less common in emerging markets, so operators should instead focus on improving the ease of paying bills by offering a wide range of payment options, including in-app payment.

It is commonly perceived that increasing the take-up of fixed–mobile bundles will reduce churn. However, the evidence from countries such as Belgium, the Netherlands and Spain suggests that growing country-level fixed–mobile bundle penetration has had little impact on fixed broadband churn rates.

Modelling predicted churn is an important area of focus for operators

Many fixed broadband operators use sophisticated, AI-driven, predictive modelling to determine which customers are most likely to churn. This analysis may indicate that those frequently calling customer service are more likely to churn, for instance. Subscribers deemed to be likely to churn can then be targeted with offers to prevent them from dropping the service. Further refinement of these models has the potential to generate significant churn benefits.

FTTP migration tends to reduce churn, but the impact is nuanced and may be weaker than generally perceived