IoT: successful telecoms operators use large bases of connections to drive investment in the value chain

Analysys Mason has identified four operators as ‘Pioneers’ in its most recent Operator IoT Scorecard 2021: AT&T, China Mobile, Telefónica and Vodafone. These telecoms operators have been successful in the IoT market because they have mutually supporting aspects to their business – a large base of connections that helps to fund investment into new horizontal and vertical solutions, which in turn help to drive the number of new connections.

This article summarises the strengths of the Pioneers. It is based on research and analysis from Analysys Mason’s sixth operator IoT study, Operator IoT Scorecard 2021: operator strategies for IoT, in which we analysed the strategies of 17 of the operators that have been most successful in the IoT market.

Each of the operators included in the Scorecard offers a range of IoT services. The Scorecard identifies the operators’ strategic focus and core strengths. Analysys Mason acknowledges that this positioning is often deliberate; operators may opt to specialise in one area of IoT based on factors such as their size, market position, assets and appetite for risk. 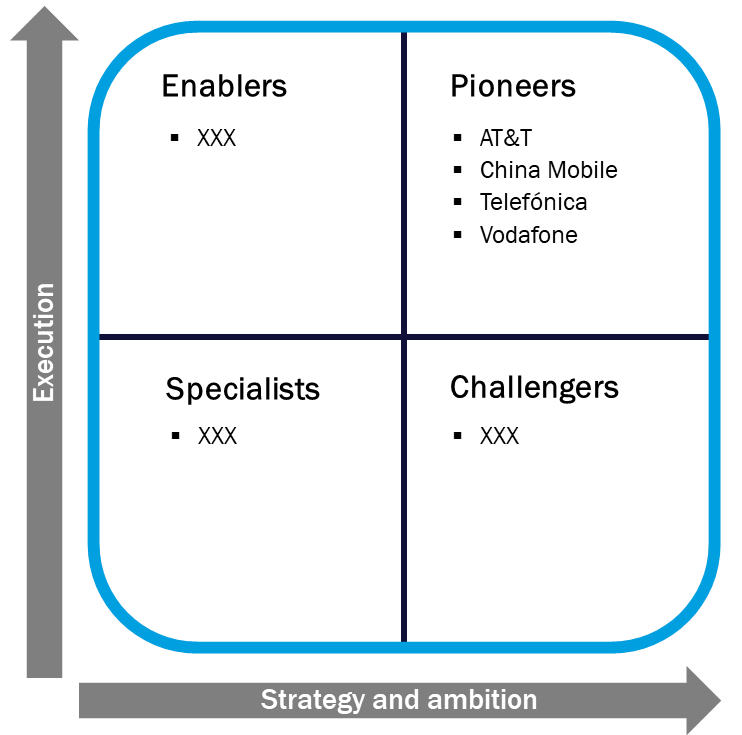 The Pioneers have laid the foundations for an IoT business with a clear strategy, robust KPIs and an independent IoT division

The following factors have enabled the Pioneers to be particularly successful in IoT.

AT&T has been delivering IoT solutions for a long time and has achieved size and scale. It had 81 million connected devices on its network at the end of 2020. It is especially strong in the automotive industry where it provides connectivity for more than 40 million vehicles, 9.9 million of which were added during 2020 despite the COVID-19 pandemic.1 AT&T leverages its brand and track record in the automotive vertical to support B2B and B2C business models.

China Mobile is the largest IoT operator in the world in terms of the number of connections and benefits from its huge size and scale. It reported 873 million connections at the end of 2020 and remains well ahead of its main rivals China Telecom and China Unicom. China Mobile has a powerful brand and is a recognised IoT leader in China. It has leveraged its scale to reduce costs and influence market developments, as it has done in NB-IoT. China Mobile IoT has developed hardware and software applications to fill gaps in the market and its integrated solutions facilitate the adoption of IoT. Its parent company, China Mobile, is investing significant resources in 5G-driven industrial transformation and is benefiting from state funding that drives innovation in this area.

Telefónica has benefited from taking a long-term vision for IoT and has developed a strong set of horizontal, vertical and complementary capabilities. The operator had 26.2 million connections at the end of 2020. Telefónica has invested in its KITE, SmartDigits and SmartSteps platforms to build horizontal and vertical capabilities and to generate additional value. It has demonstrated its ability to build vertical solutions with its proposition for the retail sector; it has built a platform to support multiple applications and can demonstrate revenue growth, which it seeks to replicate for other verticals.

Vodafone has achieved size and scale in IoT connectivity and has built on this foundation to develop end-to-end solutions for selected verticals. The operator had 120 million connections on its network at the end of 2020. Vodafone has a bold strategy for IoT and is willing to invest in new solutions. It has proved that it is taking risks and experimenting in order to identify new growth areas and it accepts that not all ventures will be successful. Vodafone differentiated its IoT proposition early on by delivering solutions and services that build on its connectivity offer. Vodafone’s acquisitions and investments provide the foundations for its centres of excellence to target key verticals such as automotive, healthcare, industrial IoT and smart buildings.

The operators featured in the IoT Scorecard, including the Pioneers, have taken distinct approaches to building their IoT strategy because they have embarked on their strategies from different starting points. The addressable market for IoT varies according to each country where the operators have a presence, and each operator has a diverse set of assets that they can use. The Pioneers have built a set of IoT capabilities beyond their initial starting point that have not been constrained by their traditional communications proposition in the consumer and enterprises markets. As such, they have established a solid position on which to win new IoT business in the future. The IoT Pioneers may have taken different approaches, but they have all invested significantly to address the IoT opportunity and build IoT best practice in all of the benchmark criteria.