"KORE Wireless represents a listed company that looks much like telecoms operators' IoT divisions; KORE’s performance will be closely scrutinised."

KORE Wireless (KORE) announced, on 12 March 2021, that it will list on the NYSE following a merger with a special purchase acquisition company (SPAC), Cerberus Telecom Acquisition Corp (CATC). This deal is hugely significant for the IoT connectivity sector; KORE will be the first publicly traded IoT connectivity specialist. The enterprise value of KORE, at USD1 billion (or 18 times its 2020 EBITDA), also sets a valuation benchmark for others.

The listing and associated valuation give telecoms operators with large IoT divisions strong motivation to explore new ways of realising the value of these divisions.

The transaction sets KORE up for further acquisitions

KORE will acquire both cash (USD484 million) and new shareholders (including KOCH Industries and BlackRock) as part of the deal, which is expected to close in 3Q 2021. The deal will also enable KORE to use its stock to make further acquisitions, which is a central part of its growth plan.

The investor presentation on the deal provides plenty of information on KORE’s business and its plans. Figure 1 shows the key data for KORE’s business. Note that the chart does not include the impact of any future acquisitions, but KORE hopes to add USD245 million in revenue by 2025 by buying other IoT firms. The investor pack lists, but does not name, ten targets, six of which are in the USA. For more on KORE’s M&A strategy, see Analysys Mason’s Consolidation among IoT connectivity disruptors will have major implications for operator IoT business units.

The investor presentation does not provide information on the revenue per connection, but KORE had 12 million SIMs at the end of 2020, so we calculate that this figure is approximately USD1.5 per SIM per month. 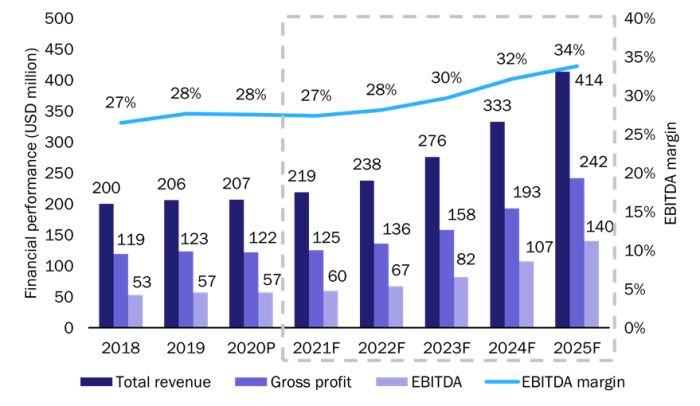 The following points stand out.

KORE has split its business into the following three categories.

The KORE NYSE listing will have implications for more companies than just KORE itself. KORE will be the first listed company that looks like the IoT division of a telecoms operator and will get close attention from such players as a result.

IoT divisions may come under new scrutiny as operators look at ways of realising their value. Telefónica has already started this process by splitting its IoT division into a separate legal entity, and it may be open to outside investors. Others may make similar moves. At a minimum, operators may want to provide investors with more information on their IoT divisions in an attempt to grow their valuations.

Operators will be keen to show how their IoT divisions compare with KORE. For example, the IoT divisions of the big operators are far larger than KORE. For example, Vodafone’s IoT division has roughly ten times as many connections and generates five times as much revenue as KORE. Deutsche Telekom, Orange, Telefónica, and all operators in the USA and China have more connections and generate a higher IoT revenue than KORE. Even Telstra, which has fewer connections (4 million), has similar IoT revenue (USD171 million in 2020). Few operators report IoT revenue, but those that do are reporting growth rates in line with, if not faster than, that of KORE (typically 5–20% in 2020).

The steps that these operators take with their IoT divisions will depend, at least in part, on the success of KORE as a publicly traded company. Its performance will be closely watched.