"Operators' enterprise revenue in 2017 showed a marked improvement over that in 2016 as mobile ARPU stabilised and operators improved their sale of ICT services."

The financial results for operators’ enterprise divisions in 2017 demonstrated an improvement over those from 2016, with revenue growth rates for operators increasing on average from –0.7% in 2016 to 0.0% in 2017 (Figure 1). While operators such as AT&T and Vodafone had a worse performance in 2017, many operators reversed negative trends – Deutsche Telekom (Germany), Telstra and Verizon returned to growth, and BT and KPN reported an improvement over 2016’s growth rates. Despite the still declining trend for many major operators, some of the fundamental factors driving the decrease in enterprise revenue are diminishing, especially as operators enhance their position in ICT services. The data in this article comes from our enterprise revenue tracker. 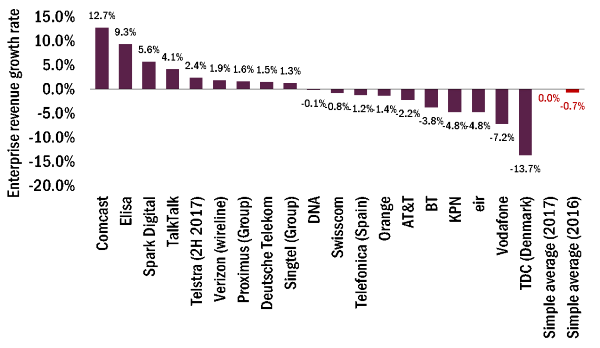 The fundamentals in core connectivity seem to be improving

Some of the fundamental drivers of declining enterprise revenue are stabilising, signalling an improvement in market conditions for operators. While declines in fixed voice revenue continue to heavily impact operators, mobile ARPU has stabilised after substantial declines, easing much of the pressure on mobile revenue. For example, the enterprise mobile ARPU for KPN in 2010 was more than double that for consumer, but by 2016 this lead had reduced to 23% and remained relatively unchanged in 2017, decreasing by only a small amount to 20%. While most operators do not publish such detailed data, we believe that this trend is common for many operators. For example, Proximus, which does publish this data, has consistently reported stable enterprise mobile ARPU, which has helped to underpin its gradual enterprise revenue growth.

Enterprise revenue appears to be bottoming out – enterprise ARPU has fallen to the point where there is little room for further reduction, making it easier for operators to use growth in certain areas of connectivity (such as fixed broadband, IoT and mobile data) to offset declines in legacy services.

Operators are using small, focused acquisitions to enhance their position in ICT services 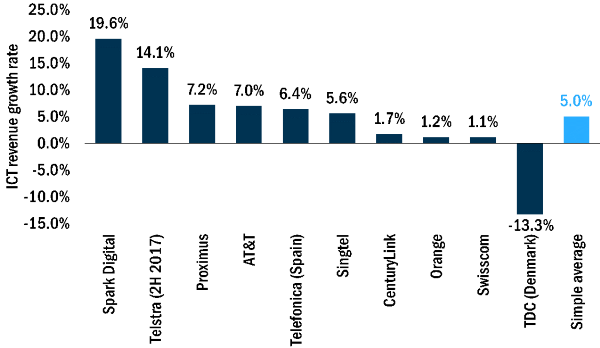 Much of the improvement in operators’ enterprise revenue can be attributed to growth in ICT revenue, often driven by acquisitions. Operators are increasingly looking to ICT services to boost their enterprise portfolios and differentiate themselves, with several fundamental implications for operators.

The acquisitions that operators are making are often small and focused, aimed at obtaining specific capabilities or personnel. For example, in 2017 Proximus acquired Davinsi Labs and Unbrace in order to gain around 20 security experts and 11 software developers, respectively. Telefónica has also made an extensive series of acquisitions to gain specific capabilities in security, such as SmartAccess (in 2014) which specialises in biometric and electronic ID security, and Blueliv which specialises in credit card security. Acquisitions are not just a means of winning new revenue, but of obtaining the specialised personnel required to allow operators to become ICT providers. Conversely, part of TDC’s decline is due the sale of its hosting business, thereby adding itself to an extensive list of operators exiting the hosting market; this indicates the difficulty that operators face in this market in some regions.

In-country consolidation may help all operators, especially where competition is reduced. The last 12 months have seen some significant mergers occur or be proposed, especially in Europe. Deutsche Telekom’s local subsidiaries are in the process of acquiring UPC in Austria and Tele2 in the Netherlands. Tele2 is purchasing Com Hem in Sweden. Of these deals, the proposed (but not yet approved) merger of Tele2 and T-Mobile in the Netherlands will probably have the largest impact, reducing the number of Dutch mobile operators from four to three. Nonetheless, the other deals should still help to reduce the price pressure.

Operators can justifiably harbour a more positive outlook than a year ago, but significant threats remain

The stabilisation of mobile revenue and operators’ continued expansion into new and growing sources of revenue warrants a more optimistic perspective than 12 months ago, but operators still face significant challenges. They will continue to deploy unified communications and SD-WAN solutions to defend their portion of enterprise spend, despite the potential of these solutions to reduce revenue. There is also the looming threat of Internet players, such as AWS, Facebook and Google, entering the enterprise service market with their own solutions and reducing the service opportunity for operators.

The key observation for 2018 will be the extent to which operators continue to reverse declining trends. To return to growth there will need to be a solid bottoming out of connectivity revenue and continued growth from ICT (rather than one-off boosts from acquisitions).