Indian MNO Reliance Jio has the highest volume of mobile data traffic of any operator in the world. It generated 4.31EB of traffic in 4Q 2017, while the world’s largest operator in terms of subscriber numbers, China Mobile, generated 4.83EB of handset data traffic in 1H 2017. This comment examines the implications of Reliance Jio’s traffic levels for other operators and examines why the data usage on the company’s network is so high.

Reliance Jio launched beta trials of its network to partners and employees in December 2015. At this point and until the launch of full commercial services in September 2016, data was totally free and unlimited. There were 1.5 million users of Reliance Jio’s beta trial by the end of 2Q 2016, with an average usage of 26GB per month. Usage from these triallists was unlikely to have been constrained by network congestion given that the number of users was small at this point; in comparison, by the end of 3Q 2017, Reliance Jio’s customer base had grown to 138.6 million. Given the low penetration of fixed broadband in India, some of the Reliance Jio subscribers were probably using the data for tethering for larger-screen devices and other smartphones. Overall this means that the 26GB per user figure reflects the upper benchmark of data usage on unlimited plans today.

Over time, Reliance Jio implemented fair usage policies that meant that it moved away from truly unlimited data offers. Whilst data usage remained free for the rest of 2016, following the commercial launch on 5 September, a fair usage policy of 4GB of high-speed data per day was imposed. If the usage exceeded this level, speeds were throttled to 128Kbps. We estimate that the average usage per subscriber dropped to around 16GB in 4Q 2016. Reliance Jio subsequently launched its ‘Happy New Year’ offer which extended the availability of free data until the end of March 2017, while reducing the daily amount of unthrottled high-speed data to 1GB. This daily limit placed large constraints on tethering and fixed broadband type usage, which could easily exceed 1GB per day. Following this change, the average usage per subscriber dropped to around 12GB per month in 1Q 2017. The lesson for other operators is that implementing some kind of fair usage policy for unlimited offers can make a large difference to the overall traffic, and limiting tethering usage can make the launch of such offers more viable.

Reliance Jio has charged its subscribers for data usage on its network since the end of 1Q 2017, which has led to the average data consumption per subscriber levelling out at around 10GB. The very high usage levels of Reliance Jio’s customers demonstrate that there is no reason to assume that the average usage per smartphone subscriber will be higher in developed markets than in emerging markets. In fact, the opposite may be true as fewer people will have fixed broadband connections in the latter. If mobile data is priced sufficiently cheaply (Reliance Jio’s operating revenue per gigabyte was around USD0.25 in 4Q 2017), emerging market consumers can have very high usage levels.

Reliance Jio’s average usage levels of around 10GB per customer are much lower than the 56GB per month that we estimated was the average Internet data volume per fixed broadband connection in India in 2017. This significantly limits the substitutive effect of Reliance Jio’s offers on the fixed broadband market. However, Reliance Jio also offers JioFi MiFi devices, the users of which are likely to represent a single percentage point figure of its overall subscriber base. Users of these devices are more likely to connect to large-screen devices which generate more traffic, and Reliance Jio offers plans including 112GB for 28 days (with 4GB per day at full speed) for around USD7.9. The uptake of Reliance Jio’s MiFi devices has had some impact on the fixed broadband market; subscriber numbers are now declining, particularly in smaller towns and cities (see Figure 1). In the longer term, however, Reliance Jio is not relying on simply substituting data usage that would otherwise have occurred via fixed line networks. It has been reported to be planning to cover 50 million premises (17% of the total number of premises in India) with FTTH in the first phase of its fibre rollout. The broader lesson here is that even with very high cellular data usage on smartphones, there is still a case for emerging market operators to invest in last mile fibre networks. 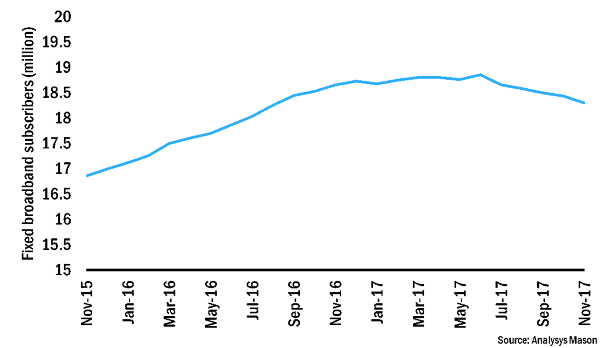 Video is a significant component of Reliance Jio’s data traffic

Video is an important driver for Reliance Jio’s high mobile data traffic. It reported that subscribers watched an average of 13.4 hours of video each month in 4Q 2017. Reliance Jio emphasises its media applications including JioTV, offering access to more than 400 TV channels, and JioCinema, which provides access to premium Indian films, TV shows and music videos. Conservatively assuming that the data consumption of these and other streaming applications in standard definition is 0.3GB per hour, video would generate over 4GB of traffic per month, or around 42% of the total data usage. It therefore appears that the percentage of Reliance Jio’s mobile data traffic accounted for by video is not hugely dissimilar to that of developed market operators.

Reliance Jio has consistently achieved the highest LTE speeds of any Indian operator according to results from the regulator, despite the very high traffic levels. In its 3Q 2017 presentation, the operator quoted average download speeds of 18Mbps as per the regulator data. Reliance Jio has achieved this with high- and low-band frequencies encompassing both the TDD and FDD spectra. The operator noted that it had more than 100 000 sites in operation and that it had more than twice the number of LTE base stations of all the other operators combined in 1Q 2017. Reliance Jio’s ability to cope with the huge volumes of mobile data traffic indicates that other operators will probably be able to continue to rely on their LTE networks even if usage increases significantly over the next few years.

C-band spectrum auctions in the USA: wireless incumbents are paying for the weight of 5G expectation