"The future of spectrum will require long-term investment and long-term decision processes, the economics of which are not always clear."

The wireless industry needs enough spectrum to cope with the growing demand for connectivity. The amount of data that is handled through wireless communications is continually increasing. The available spectrum is a limited resource that needs to be replenished or in some cases repurposed. The spectrum exists; a wide range of electromagnetic spectrum is available in nature. However, getting agreement on who can control spectrum that is useful for specific purposes is challenging, requiring diligent efforts from network operators, vendors, regulators, other agencies and industries. 5G and the next-generation technology, 6G, are making these efforts harder than in the past given the continual increase in demand for spectrum.

In future, the industry will need to:

The industry must view the value and allocation of spectrum in a broader set of economic and operational trade-offs.

5G has a range of possible spectrum choices

The industry is putting pressure on regulators to allocate more spectrum for mobile use, for deploying 5G and subsequently 6G, and this is likely to continue for the next decade. It may be surprising that the industry is already talking about spectrum for the next generation when 5G services have not been launched in all countries yet, and 5G spectrum has not yet been assigned in some. Although there are international agreements on bands that should be used for 5G, regulators in some countries have difficulties with assigning spectrum for 5G use if it is already in use for another purpose, and operators are hesitating to pay for the rights to use new spectrum unless the spectrum is completely clear of incumbent use.

The 3GPP committee working groups worked for many years to get agreement on 5G standardisation, including standardising the multiple bands that have been designated for 5G use in different regions. Figure 1 shows three different spectrum bands used for 5G and how these relate to bands for previous generations. The low bands provide greater geographical coverage from a site while higher bands provide more capacity, but at the cost of coverage from a given site.

Figure 1: Spectrum portfolio for mobile, distributed across generations of technology 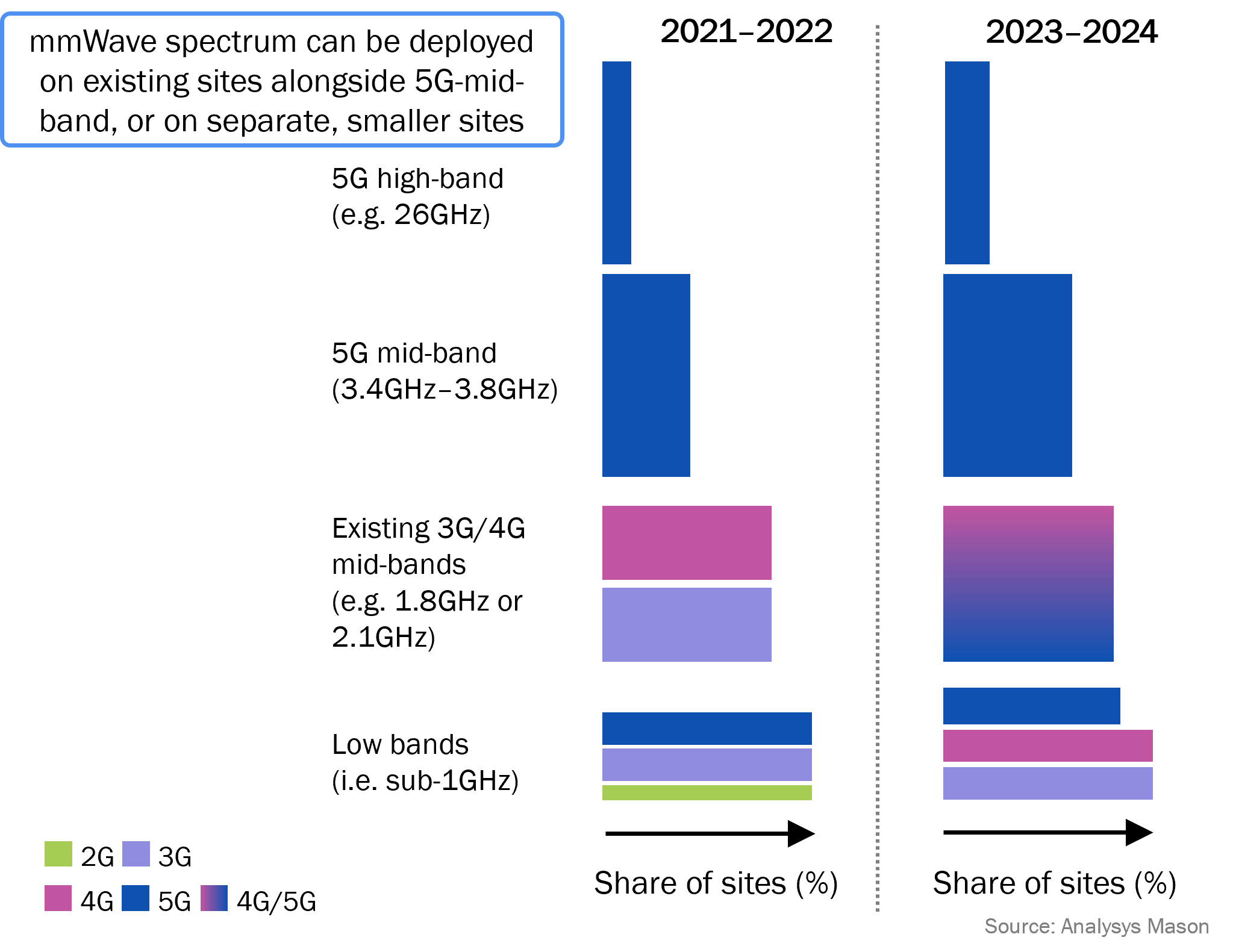 The early ideas about 5G envisioned high performance that far exceeded LTE capabilities and could compete with fibre. This high performance is mostly required where usage is dense, and hence short wavelength spectrum, which was generally available in the 24GHz–40GHz range (mmWave) was thought to be suitable. However, this very short wavelength spectrum is less useful where wide-area coverage is needed (for example, to accommodate more traditional mobility applications, such as accessing voice and data on the move). Some countries, notably Japan, South Korea and the USA, have pressed on with mmWave spectrum availability and network operators have built networks that use mmWave spectrum for mobility and fixed-wireless applications. However, mmWave has a physical limitation that creates significant economic and logistical problems when this spectrum is used in networks that are designed for mobility applications. mmWave signals will travel only a few hundred meters and are generally blocked by any solid object. Therefore, the addition of mmWave to the millions of existing ‘macro’ cell towers does not provide comparable coverage to that of the lower-frequency bands used in earlier mobile generations.

mmWave can be useful in the deployment of many more ‘small cells’ connected by a dense fibre backbone network. Over time, this fibre and small-cell infrastructure will be built out. However, this is costly to do, and deploying small cells can have practical challenges, ultimately making them economically unattractive when compared to adding spectrum to existing cell towers. So in the meantime, the industry needs solutions that can leverage the existing cellular infrastructure.

700MHz spectrum, which is used for LTE, can be used for 5G and can be shared between the two technology generations with dynamic spectrum sharing (DSS). However, taking this approach will give 5G only a marginal performance improvement over LTE. To compensate, the industry has turned its attention to mid-band (also called C-band) spectrum (spectrum in the 3GHz–6GHz range). In this band, 5G can perform better (and can also support new applications, such as fixed wireless, along with mobility) while leveraging the existing macrocell infrastructure. New antenna technology that is well-suited to using bandwidth in this frequency range can enhance the performance of 5G compared with lower frequencies used with traditional antennas. The problem is that this mid-band spectrum is good for a lot of other uses so most of it is also allocated to other industries, particularly satellite and aviation.

At the recent 11th Americas Spectrum Management Conference in Washington, DC, Janette led a panel that included Patrick Welsh from Verizon, Matthew Kellison of ISED Canada, Jeffrey Marks from Nokia and Gerry Oberst of the law firm Hogan Lovells. The panel dealt with efforts in Canada and the USA to make more C-band spectrum available to network operators. The focus of this has been to apply engineering modifications to satellite earth stations, to make spectrum available for mobile networks. In the USA, the FCC used the nearly USD10 billion proceeds of auctioning the repurposed spectrum to pay incentive payments to satellite operators to upgrade equipment and free up the spectrum early. As a result, another 180MHz of C-band (3.7GHz) spectrum will be freed up in December 2023. In Canada, where the government has not funded incentives for faster transition, satellite operators will not free up the spectrum until 2025.

Also at this conference, US agencies discussed studying the future use (and the possibility of accommodating more terrestrial wireless use) of spectrum in the 10GHz–10.5GHz, 12.7GHz -13.25GHz (the Ku-band) and 14.8GHz–15.3GHz ranges. All these bands would have value in terrestrial use, but are allocated to other uses – such as satellite broadband and US military avionics. The Ku-band is particularly problematic because that spectrum is widely used for satellite broadband, satellite TV and other satellite applications. This is a rapidly growing area; thousands of new satellites are being launched in the Ku-band.

Technological advances that make wireless technologies and the associated core networks more intelligent are giving some ways to make more effective use of available spectrum. As noted earlier, DSS allows operators to share existing spectrum for two different RAN technologies. As operators roll out 5G standalone (5G SA) technology, they will be better able to dynamically adjust the spectrum allocated for uplink and downlink at each cell site, to cater for more diverse user needs.

Sharing between mobile and incumbent uses of spectrum may also be considered more in future. One emerging example of mobile use sharing with incumbent use is CBRS in the USA, where the US Navy (and some others) have primary rights to 150MHz of C-band spectrum. When the priority users are not using the spectrum (the Navy rarely uses its radar in Utah), others may use the spectrum in a limited area. The FCC has certified a small number of providers to provide dynamic management of the shared spectrum. However, the incumbent Navy use dictates that usage restrictions are more limiting than those applied in licensed mobile spectrum – low-power limits make the band only useable in small-cell environments, which is different to how C-band spectrum is used in many other countries, where it is being deployed on higher-powered towers with active antennas, for wider-area coverage.

The future of spectrum will require more investment in fibre infrastructure, many more small-cell sites, more use of intelligence in networks, and potentially more flexibility in accessing spectrum on a shared access basis. The decision process is more complex, with many technical, operational and economic trade-offs. This future will need long-term investment and long-term decision processes, the economics of which are not always clear.

Analysys Mason has done many projects and written many reports to advise regulators, operators and vendors on the technical and economic aspects of spectrum. A few of these projects and reports are noted below.