The pace of fibre roll-out in CEE is increasing, but service take-up is limited due to competition from FWA


"The take-up of fibre in CEE has been slow, but investment into FTTP coverage and digital skills will help to boost service usage."

The pace of the fibre roll-out in Central and Eastern Europe (CEE) is increasing, and we expect that FTTP/B will account for 63% of all fixed broadband connections by 2026.1 The growth in the number of FTTP/B connections will mainly be driven by the migration of subscribers from DSL to FTTP, fibre network roll-outs (often supported by subsidies) and an increase in the number of new-to-fixed customers. The number of fibre deployments has been growing the most in Western Europe, but the number of FTTP/B networks in CEE is also rising, albeit slowly, thanks to both retail and wholesale initiatives. There is uncertainty over whether the roll-out of fibre will provide sufficient impetus to boost service take-up within the region, particularly in Poland, Slovakia and the Czech Republic. Fixed lines are harder to sell in these countries due to growing pressure from fixed-wireless access (FWA) competitors and the lack of digital literacy among some demographics.

The deployment of FTTP/B in CEE has been slow, but a number of operators have taken steps to increase their coverage. These fibre network expansions will be facilitated by subsidies and co-investments, many of which are targeted towards rural and underserved areas (Figure 1).

The number of operators that provide wholesale access to FTTP infrastructure is expected to increase, as will the number of wholesale-only, non-regulated operators. This will enable businesses to maximise the utilisation of their fibre infrastructure.

CETIN, the national wholesale-only provider in the Czech Republic, offers a large number of small, local ISPs access to its fibre infrastructure. The wholesale-only carve-out from Orange (Światłowód Inwestycje) in Poland received a EUR130 million loan from the European Investment Bank to build FTTH networks with minimum speeds of 100Mbit/s. This is targeted towards underserved and underdeveloped areas and will cover 2.4 million homes by the end of 2025. The number of wholesale providers in Poland is likely to increase following the distribution of POPC subsidies (as part of the Digital Poland programme) because operators are required to provide regulated wholesale network access in exchange for the funds. Wholesale-only provider Nexera received EUR150 million in subsidies from the POPC project to improve access in areas with low population densities. Nexera covered 280 000 households in Poland with fibre in 2021, compared to just 100 000 in 2020.

However, the demand for wholesale fibre services in countries such as Romania will be limited due to the presence of several vertically integrated operators as a result of the low roll-out costs.

The take-up of fibre in CEE has been slow, but investments in FTTP coverage and digital skills will help to boost service usage

The take-up of FTTP has grown more slowly in CEE than in Western Europe. This is due to the high proportion of users that rely on mobile internet access and the limited digital literacy among older members of the population. Mobile services in CEE tend to be cheaper, easier to set up and more readily available than FTTP. However, fixed–mobile convergence (FMC) operators can provide FWA in areas that are too expensive to reach with FTTP in order to attract previously mobile-only customers and increase the number of broadband subscribers. A number of national strategies (such as the Digital Competence Development Programme 2020–2030 in Poland) have also been launched to help to overcome the lack of digital literacy in the region.

The number of FWA connections in CEE is growing and is expected to increase by 35% between 2021 and 2026. Wholesale players in countries with large rural areas and a high demand for fibre (such as the Czech Republic, Poland and Slovakia) will use LTE/5G FWA as a fibre substitute to reach remote customers. FWA operators will continue to report strong service take-up in these countries. The upcoming 5G spectrum auctions in Estonia, Lithuania, Poland and Turkey are also likely to increase the rate of deployment and interest in 5G FWA.

An increasing number of MNOs are turning to FWA to increase their network utilisation. This is particularly the case in Poland and Slovakia, where we expect that FWA will account for 37% of fixed broadband connections by 2026 (Figure 2). However, MNOs should avoid overusing FWA because this can push high levels of residential broadband traffic onto mobile networks, which risks damaging mobile performance. 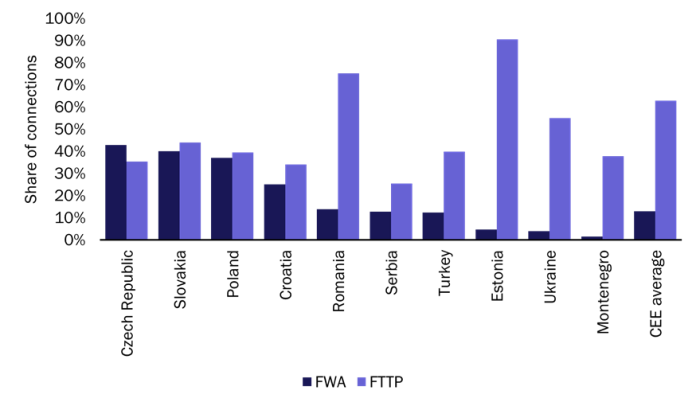 M&A activity in Western Europe is entering a new phase