"Increasing FTTH coverage and competitive wholesale rates will be key drivers of the rapid growth in fixed–mobile convergence penetration in countries such as Poland and the UK."

Fixed–mobile convergence (FMC) retail plans are common in many European markets and are becoming more prevalent in regions such as emerging Asia–Pacific (EMAP). FMC plans are becoming increasingly popular in almost every market where they are available, though both the extent of their popularity and the form that they take are dictated by the level of market competition and operator infrastructure ownership. An increase in the competitiveness of wholesale fibre markets and the amount of M&A activity will lead to growth in the penetration of FMC offers (see Figure 1). In this article, we present analysis from Analysys Mason’s latest FMC forecast, which models 16 countries individually and isolates the trends that operators must consider when launching FMC offers or competing against other FMC players.

Figure 1: FMC accounts as a percentage of the number of fixed broadband connections, selected countries, 2020 and 2025 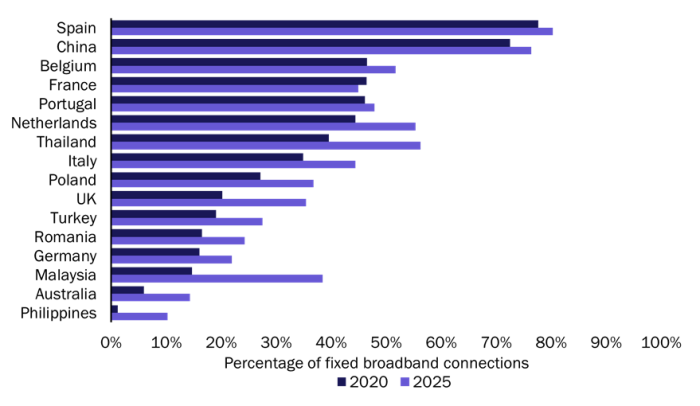 FMC penetration will grow rapidly in many countries in Europe

We can classify countries in Europe into four distinct groups based on the penetration of FMC plans.

The FMC market in EMAP is different to that in Europe

Fixed broadband penetration is still growing strongly in many countries in EMAP, which provides MNOs with an opportunity to grow their share of the fixed market. FMC penetration is high in Thailand and China and has been driven by growth in the take-up of FTTP. FMC accounts for over 70% of all fixed broadband connection in China and the integrated operators will continue to push FMC bundles to stall the progress of the new mobile entrant. Almost all operators in Thailand now follow an FMC bundle strategy thanks to pressure exerted by True and AIS, and FMC penetration will continue to increase.

All of the major MNOs in Malaysia have entered the fixed market due to improving wholesale broadband access rates and concerns around the viability of a cellular-only approach in a high-cellular-traffic market. Incumbent Telekom Malaysia offers its own FMC bundles to stay competitive and drive mobile subscriber base growth. The take-up of FMC offers in Malaysia will increase significantly during the forecast period. FMC in the Philippines remains nascent, but the large integrated players will start to push FMC bundles following increasing pressure from fixed and mobile.

MNOs that were planning to offer substantially discounted FMC plans were reliant on ownership of fixed and mobile infrastructure or M&A until recently, and it is still true to say that MNOs that rely on wholesale broadband access often struggle to build FMC customer bases in Europe. However, the success of Salt in Switzerland and MÁSMÓVIL in Spain show what can be achieved in the future. Both operators have been able to capitalise on competitive wholesale fibre markets to undercut established operators with their retail FMC plans. We expect that more operators will pursue a similar strategy as wholesale fibre access becomes increasingly competitive due to the growing presence of third-party fibrecos.

Barriers to the launch of competitive FMC plans will also diminish because of the shift away from bundles centred around traditional pay TV as OTT video grows in importance. ‘Bare bones’ bundles centred around fibre and 5G connectivity will become increasingly prevalent, and operators offering such bundles will not need to procure expensive exclusive content in order to gain a foothold in the FMC market.

There is still scope for further fixed–mobile M&A in some markets, and this can drive substantial cost savings without arousing regulatory intervention. The resulting FMC bundles can damage the prospects of mobile-only competitors, thereby giving consolidated operators a significant advantage. This is another factor that will drive an increase in FMC penetration over the forecast period.

Operators will also look to continue to innovate with their retail FMC bundles. FMC bundles such as Telekom Deutschland’s MagentaEINS Plus (which offers unlimited data with the same maximum speed on both fixed and wireless networks) could become more commonplace and will reinforce the value of FMC plans in consumers’ minds. Emerging services such as cloud gaming will also be strongly compatible with a universal superfast connectivity offer.

Fixed–mobile convergence in the USA: trends and forecasts 2021–2026