Operators should follow the move of Singtel, Telefónica and TELUS to invest in IoT connectivity start-ups


"Ignoring the innovation of smaller players means risking missing out on new areas of growth."

One of our predictions for 2021 was that an established operator would buy an IoT connectivity disruptor (or IoT MVNO). We have not seen any full acquisitions yet, but Singtel, Telefónica and TELUS have all invested in disruptors in 2021. We are also aware of others that are considering investments.

Investing in start-ups reflects a realisation by the established operators that they cannot take full advantage of the connectivity opportunity by just continuing to use their current approach; different tactics are needed to gain access to new technology and market segments. Much of the innovation in technology and business models is coming from the connectivity disruptors, and operators that are not investing in these disruptors risk missing out on future revenue growth opportunities.

We have covered IoT connectivity disruptors extensively in our research. Our latest (fifth) report profiling disruptors is available here.

Some large IoT operators have invested in start-ups

We are aware of six telecoms operators that have made an investment in a start-up firm involved in selling IoT connectivity (Figure 1). None of these start-ups is doing something that a telecoms operator could not do itself, at least in theory, so why are they choosing to invest rather than build? 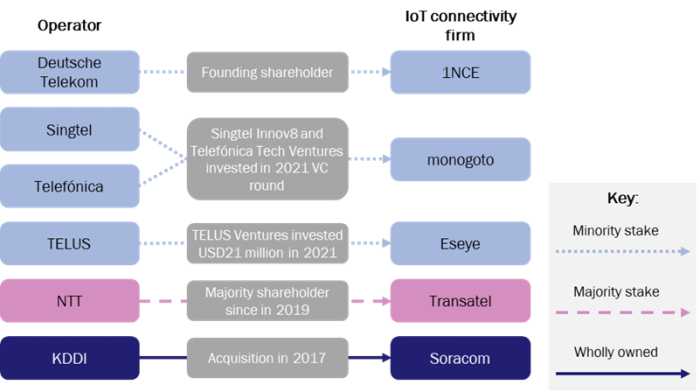 The simple answer is that investing in an IoT connectivity disruptor gives an operator options that it would otherwise not have. Disruptors are investing in new technologies (for example, virtual core networks hosted on public clouds and self-service sales platforms) or are targeting new geographies (which often involves providing global connectivity) or new customer groups, such as developers and device manufacturers.

An investing operator can expect multiple benefits from its investment.

Harvard professor Rebecca Henderson has argued that established firms can fail to innovate because internal structures make it difficult to pursue new activities. Established firms allocate resources to gradual improvements in the existing business rather than taking radical steps, such as developing new technology or going after new customer segments. Investing in an IoT connectivity disruptor allows an operator to take these radical steps by proxy without needing to overhaul its own organisational architecture.

The largest operators have avoided investing in start-ups

It is perhaps surprising that more operators have not invested in IoT connectivity disruptors given the attractions of this model. Figure 1 notably does not include the six largest IoT operators in terms of the number of connections (the three Chinese MNOs plus AT&T, Verizon and Vodafone). This may be explained as follows.

Operators should consider the risks of not investing in disruptors

Investing in/buying early-stage IoT connectivity companies has obvious financial risks. It can also create a distraction and can cause an operator to take its focus away from the day-to-day priorities of the current core business.

However, the risks of not investing are also great. Telecoms operators are often large, bureaucratic organisations that are incapable of moving quickly. IoT connectivity is so tightly intertwined with an operator’s main business that there may be even less room for manoeuvre than with some of the newer areas that operators could invest in, such as cloud or security, where a set way of doing things is not so firmly entrenched. As such, not investing in IoT connectivity disruptors could mean that operators get left behind.

Operators have been slow to take even simple steps to make their IoT connectivity services more attractive. For example, most operators still do not even have a public price list. Operators that have chosen not to invest in start-ups should at least try to understand what these players are doing; ignoring the innovation of smaller players means risking missing out on new areas of revenue growth.