Growth in the IoT market will be sizeable, but challenges remain for operators


"Increasing pressure on connectivity revenue has serious implications for IoT operators, many of whom already struggle to provide higher-value services along the value chain."

The total number of IoT connections worldwide will grow sevenfold between 2018 and 2028 to reach 5.3 billion. This represents a CAGR of 22%, which is significantly higher than the growth rate for the number of smartphones (the total number of handsets worldwide is predicted to grow at a CAGR of just 2% between 2018 and 20241). However, only a handful of operators are pursuing the IoT revenue growth opportunity by investing in developing new services to serve new sectors that match their IoT ambitions. Those that are acknowledge that IoT is a long-term initiative. Our recent forecast update reflects some of the challenges that IoT network operators encounter regarding LPWA network deployment, the role of 5G in supporting IoT applications and the increasing erosion of connectivity revenue. This article examines these trends and explains their impact on the IoT landscape.

Growth in the number of LPWA connections will be solid, but slower than anticipated

Operators also face significant challenges regarding channel strategy, funding and cultural factors (such as resistance to the adoption of new technologies) when targeting sectors such as agriculture, smart buildings and smart cities.

This is slowly changing. There have been a few large contract announcements for LPWA connectivity such as Orange’s contract with Veolia to connect 3 million meters over a 10-year period and Telia’s announcement to deploy NB-IoT and/or LTE-M for its smart meter contract in Sweden.

5G will provide good opportunities to support IoT use cases, but these will emerge only gradually over time

5G IoT connections will emerge in 2020 and their number will grow to around 150 million by 2028 (it should be noted that our 5G forecast does not include NB-IoT and LTE-M, even though they are sometimes classed as 5G technologies). Operators in China will deploy the largest share of connections (53%), followed by those in Western Europe and North America (14% and 11%, respectively). In the early years of 5G deployments, operators will develop and market 5G services to enhance the customer experience for mass-market smartphone users (the eMBB use case) with a fallback to LTE. Analysys Mason forecasts that the number of smartphone and broadband 5G connections will grow to 1.9 billion in 2024. This represents a stark contrast to the 28 million 5G IoT connections that we forecast for 2024.

The adoption of 5G IoT networks will initially be slow due to limited coverage and high device costs. Automotive use cases will require good geographic coverage and other use cases will not support the higher cost of providing a fallback to LTE. However, the automotive sector will generate the largest share of 5G IoT connections during the forecast period (Figure 1). 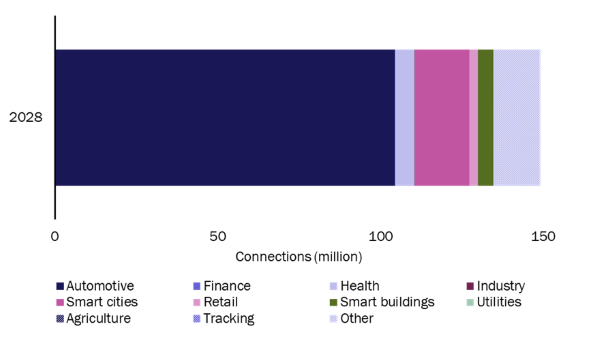 Figure 2: Percentage of TVC revenue from each component for traditional cellular and LPWA networks, worldwide, 2028

Connectivity ARPC erosion is attributed to:

Increasing pressure on connectivity revenue has serious implications for IoT operators, many of whom already struggle to provide higher-value services along the value chain.

Operators are building solutions to address the challenges

Operators with dedicated IoT business units are developing strategies to address many of these challenges directly. Operators working in the LPWA sector are focused on high-volume segments (such as smart metering) in order to support millions of connections and generate meaningful revenue. Some are also building new services with a view to target some of the longer-term 5G opportunities such as industrial IoT. These opportunities involve new business models and ecosystem partnerships, and IoT will be one component of a broader solutions portfolio including 5G, cloud, edge and AI. The forecast illustrates that the IoT revenue opportunity for operators is sizeable, but that there are still barriers to overcome.

Where will service revenue growth come from?