The number of IoT connections grew steadily in 2021, but IoT revenue continued to come under pressure


"Knock-on effects from the pandemic and competitive pressures in the connectivity market limited the growth in IoT revenue in 2021, despite steady growth in the number of IoT connections."

This weak revenue growth can be partly attributed to knock-on effects from the pandemic. For example, the worldwide chipset shortage has disrupted the high-value automotive market. The sustained high levels of competition in the IoT connectivity market have also played a role.

The number of IoT connections continued to grow in 2021, albeit at a slower rate than before the pandemic

Figure 1: Year-on-year growth in the number of IoT connections, selected operators, worldwide, 2019 and 2021 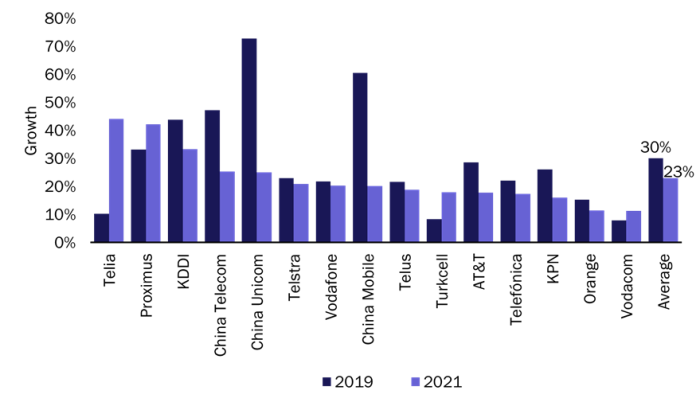 Figure 1 also shows that the simple average of the growth in the number of connections in 2021 was 7 percentage points lower than that in 2019. Some operators explained that this was caused by negative impacts from the pandemic that continued into 2021. These include supply chain disruptions and the loss of customers who experienced financial distress as a result of the pandemic. Operators for whom the automotive sector constitutes a large part of their IoT business continued to be adversely affected by the ongoing chipset shortages. Indeed, the number of new vehicles produced worldwide barely increased between 2020 and 2021, and even fell by almost 5% in Europe.1

Chinese operators’ IoT revenue grew strongly between 2020 and 2021, but revenue growth slowed down for most other operators

Figure 2 shows the annual IoT revenue growth rates for operators that reported it. Telefónica was the only non-Chinese operator to report a higher growth rate in 2021 and 2020 than in 2019, but this was partly due to its below-par revenue performance in 2020. 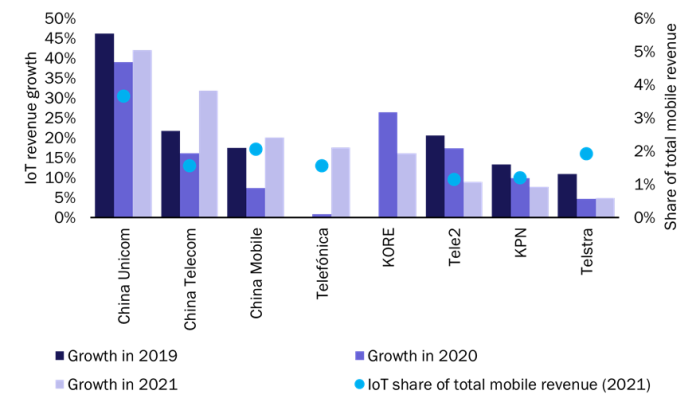 The data in Figure 2 highlight the following key points.

The IoT connectivity market environment is unlikely to improve significantly in the short term, but there are some positives for operators

The economic environment is unlikely to improve significantly in 2022. Chipset shortages have continued into 2022, but may ease by the end of the year. The level of competition in the IoT connectivity market will remain high, thereby putting pressure on IoT connectivity revenue. However, there are some positives to come for operators.

2 The IoT share of the total mobile revenue is not shown for KORE because the operator is an IoT MVNO that derives 100% of its revenue from IoT. Telefónica reports ‘IoT’ and ‘Big data’ together as one revenue segment and does not report the split of mobile and fixed revenue for all opcos. We assume that mobile revenue accounts for 60% of its total telecoms revenue based on the mobile/fixed split of those opcos that do report data (Brazil, Germany and the UK).