Cloud technology will pervade the 5G mobile network, from the core to the RAN and edge


"CSPs' spending on multi-cloud network infrastructure software, hardware and professional services will grow from USD4.3 billion in 2019 to USD32 billion by 2025, at a CAGR of 40%."

Many CSPs acknowledge the need to use cloud-native technology to transform their networks into multi-cloud platforms in order to maximise the benefits of rolling out 5G. Traditional network function virtualisation (NFV) has only partly enabled the software-isation and disaggregation of the network, and as such, limited progress has been made on cloudifying the network to date. Indeed, Analysys Mason estimates that network virtualisation reached only 6% of its total addressable market for mobile networks in 2019.

The telecoms industry is now entering a new phase of network cloudification because 5G calls for ‘true’ clouds that are defined by cloud-native technologies. This will require radical changes to the way in which networks are designed, deployed and operated, and we expect that investments will shift to support this new paradigm. The digital infrastructure used for 5G will be increasingly built as horizontal, open network platforms comprising multiple cloud domains such as mobile core cloud, vRAN cloud and network and enterprise edge clouds. As a result, we have split the spending on network cloud into spending on multiple cloud domains (Figure 1) for the first time in our new network cloud infrastructure report. We forecast that CSP spending on multi-cloud network infrastructure software, hardware and professional services will grow from USD4.3 billion in 2019 to USD32 billion by 2025, at a CAGR of 40%. 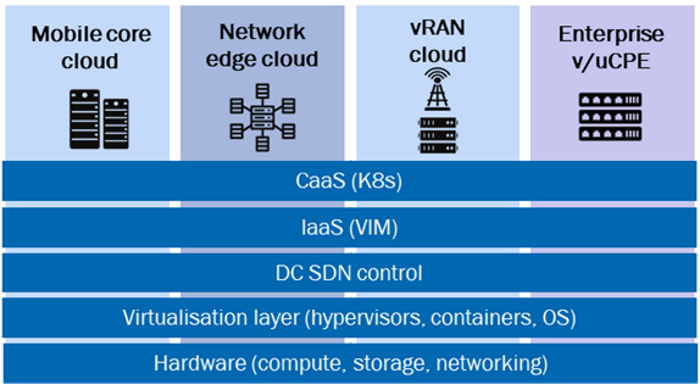 Network cloudification currently has the largest impact on mobile core network spending, and this will continue to be the case for the next 5 years. 4G capacity upgrades and 5G non-standalone (NSA) roll-outs were the main drivers of spending on mobile cloud infrastructure in 2019 and 2020. Operators have started to deploy 5G standalone (SA) core in North America (T-Mobile), developed Asia–Pacific (KT) and China (all three major CSPs), and there was a significant increase in demand for the technology in 2H 2020. We forecast that spending on 5G SA core, including the network functions and the cloud, will reach USD2 billion by 2025, growing at a CAGR of 170%. vIMS will also be an important driver of mobile core network spending because CSPs will invest in vIMS in order to provide voice-over-LTE (VoLTE) and voice-over-new radio (VoNR) in the 5G era.

The cloudification of the mobile network started in the core with traditional NFV, and cloud-native transformation will also be led by the mobile core. In particular, 5G SA core will drive the adoption of cloud-native networks. We expect that large-scale, mainstream 5G SA core deployments will begin in 2023 and will use mostly cloud-native technologies. However, this does not mean that operators will ‘rip and replace’ their existing NFV networks. We believe that the mobile core will go through a long transition period where traditional NFV and cloud-native networks will run side-by-side with hybrid, dual management and virtual infrastructure management such as Openstack and Kubernetes-based containers-as-a-service (CaaS).

Mobile core clouds will mainly be deployed on private hybrid container/VM clouds, but functions such as UPF may be physical or VM-based in some cases due to performance/latency needs or a lack of cloud-native readiness. There is growing interest from CSPs to explore the technical feasibility of using public and/or hybrid clouds for their 5G cores, most often to enable having a separate core for enterprise and IoT services.

Cloudification is moving out to the RAN and network edge

CSPs such as Rakuten and Dish spearheaded the cloudification of the RAN and network edge during 2020, and interest from other CSPs is growing quickly. Major NEPs such as Ericsson and Nokia introduced their commercial cloud RAN solutions, and a new, diverse ecosystem of vendors (including Altiostar, ASOCS, Mavenir, Parallel Wireless, Robin.io and Wind River as well as the major IT software, hardware and chipset vendors) continued to emerge in the vRAN space. Moreover, industry initiatives such as O-RAN and TIP OpenRAN made significant strides in opening up the RAN in 2020, which facilitate the disaggregation and cloudification of the RAN.

vRAN will be the fastest-growing cloud domain in terms of CSP investments. Spending in this domain will grow at a CAGR of 132% to USD11 billion by 2025 (Figure 2). The number of vRAN deployments in 5G networks will grow gradually until 2022/2023, mainly driven by first-mover, advanced CSPs in NA, China and DVAP and disruptive new entrants such as Rakuten and Dish. We forecast that early mainstream deployments will begin after 2023 with a mix of macro, densification and enterprise scenarios. 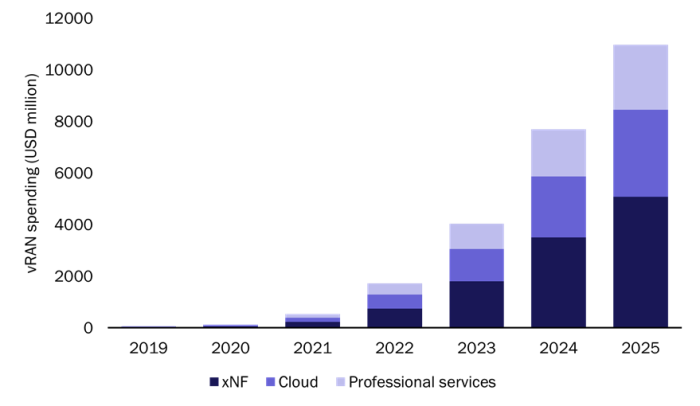 vRAN clouds will initially be predominantly VM- and IaaS (VIM)-based. However, the number of hybrid container/CaaS and IaaS clouds and CaaS-only bare metal clouds will grow steadily as cloud-native technologies mature, and together, they will account for more than half of the vRAN cloud spending by 2025. Most vRAN cloud hardware will use x86-only architecture in the early years, but spending on additional hardware components such as FPGA, GPU and smartNICs will grow with the introduction of mid-and high-band vDUs later on.

Most network edge clouds during the next 5 years will be CSP private clouds or vendor-managed clouds. Some advanced CSPs will explore converged enterprise/network edge clouds, which will require the use of public cloud providers’ edge stacks. However, this is unlikely to happen on a large scale in the next couple of years due to the stacks’ immaturity and inability to meet the stringent performance and latency requirements of the RAN.

2 A significant number of CSPs expressed their plans to use single-purpose, appliance-based DUs in the early years of the two-split vRAN model. Our network edge cloud infrastructure spending forecast excludes the spending on this approach.

An automated, platform-based approach to RAN virtualization is key to achieving its benefits