Operators must address the connectivity divide between urban and rural areas


"Operators should expand their ecosystems and adopt new models and technologies that better suit rural deployments."

The overall demand for household broadband is increasing and the average user is consuming more data, thereby driving the need for high-speed broadband infrastructure. Indeed, fixed data traffic worldwide grew by 42% year-on-year in 2020.1 However, there is a significant divide between rural and urban areas in terms of both the availability of fixed and mobile network infrastructure and the quality of service. Achieving complete coverage is a challenge.

One site may cover only a few hundred inhabitants in some areas, which means that the number of users per tower is much lower than in urban areas. This means that the business case for traditional deployment approaches in rural areas is poor. Indeed, there is a risk that the total revenue generated from providing rural services is lower than the total cost of ownership of the network. Figure 1 shows how the estimated FTTP deployment capex per premises in rural Norway can be up to ten times higher for the last 10% of the population covered than the first 86%. 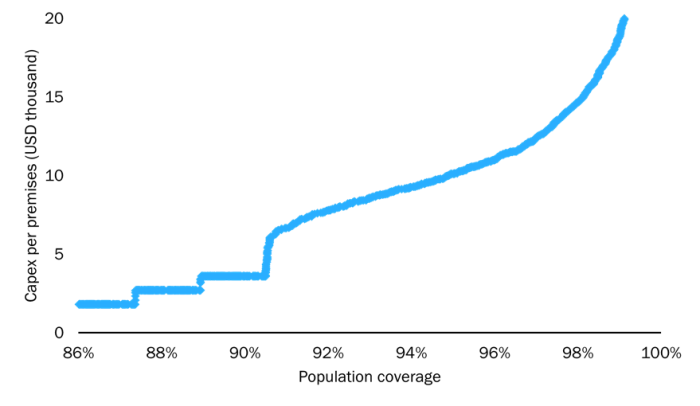 In our report, Strategies to address the economic challenges of rural network deployment, we propose three key recommendations for operators to help them to address issues related to the unfavourable return on investment from deploying rural networks.

In the neutral host model, assets are owned and maintained by a third party and are then leased to operators who can access their network services. Neutral host models can vary in terms of what assets are included in their perimeter of operations.

The neutral host model has some advantages over operator-led initiatives because it reduces the total cost of ownership for operators and gives them the possibility to expand their coverage via a more controlled investment. Neutral hosts can also mediate disputes between operators regarding network-sharing agreements.

This model complements the widespread adoption of 5G because it can address the requirement for a high density of masts for network coverage. The virtualisation of the RAN is another opportunity that can be harnessed by neutral-host providers. Decoupling RAN software from hardware means that a range of operators can run their software on neutral-host-owned hardware.

Overall, it is vital for operators to find cost-effective solutions for rural deployment, especially because regulators are increasingly determined to reduce the digital divide and as a result, are implementing roll-out conditions associated with spectrum licences to pressurise operators to reach ubiquitous coverage.