"Palo Alto Networks has overtaken Cisco as the largest network security vendor in terms of revenue thanks to sustained investment."

Palo Alto Networks has overtaken Cisco as the largest network security vendor, in terms of revenue, thanks to sustained investment

Palo Alto Networks’s quarterly revenue in 1Q 2015 was USD234.2 million; this approached USD900 million in 1Q 2020 (Figure 1). The vendor’s sustained strong revenue growth has been supported by significant investment in sales and marketing activities,2 as well as 11 acquisitions (on which the vendor spent nearly USD2.5 billion). Cisco’s accelerated revenue growth in 2H 2018 and 2019 was also propelled by M&A activity, most importantly its acquisition of Duo Security in October 2018. Fortinet, too, has performed well; its revenue growth in 2H 2019 and 1Q 2020 was faster than Palo Alto Networks’s, largely thanks to the popularity of its combined firewall and SD-WAN offering among businesses. Check Point’s revenue also grew consistently between 2015 and 2020, but at a much slower pace than that of its main competitors. Its lack of SD-WAN capability and no major M&A activity explains this slower growth. Check Point is the only one of the vendors in Figure 1 that does not have its own SD-WAN offering. 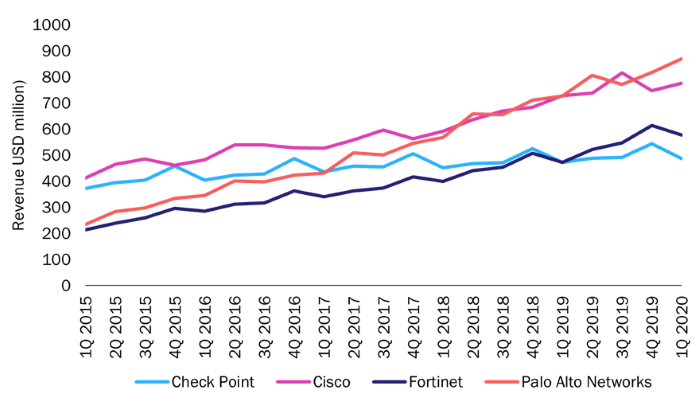 Check Point consistently turns a profit. Its operating margin was 44% in 2019, and was between 44% and 53% in every quarter in 2017, 2018 and 2019. Fortinet also turned a profit in 2019, and its operating margin continued to grow (from 7% in 2017 to 20% in 1Q 2020). Conversely, Palo Alto Networks generated an operating loss of USD133.3 million in 2019 (equal to 15.1% of its revenue during the year, and nearly 2.5 times higher than the loss it generated during 2018). Its accumulated loss surpassed USD1 billion in 2019 and its free cash flow in 1Q 2020 was weaker than Check Point’s and Fortinet’s (Cisco does not report information on the profitability of its security business). Palo Alto Networks could find itself in a weaker position than its smaller rivals if there is a major downturn in the US economy as a result of the COVID-19 pandemic, largely because of its lack of profitability and its high level of exposure to the US market (nearly two thirds of its revenue comes from the USA).

However, Palo Alto Networks spent the most out of the three vendors on both research and development (R&D) and sales and marketing (S&M) in 2019 and 1Q 2020 (Figure 2). Its spending on R&D was not only higher as a proportion of revenue than Check Point’s and Fortinet’s in 2019, but it was also 33% higher than the other two vendors’ combined expenditure in absolute terms. Palo Alto Networks’s headcount also grew faster than its competitors’: Check Point added around 130 people to its workforce between the beginning of 2019 and the end of March 2020, Fortinet added around 1600 and Palo Alto Networks added nearly 2200 employees during the same period (supported by the six acquisitions that it made in 2019 and 2020).

Other network security vendors are far behind the market-leading four in terms of scale, which is inhibiting their growth

The quarterly revenue of Barracuda Networks, Juniper Networks, SonicWall and WatchGuard, for example, is significantly lower than that of the four market-leading network security vendors.6 Similarly to their larger counterparts, these vendors are also increasingly expanding their portfolios beyond network security in order to differentiate (for example, WatchGuard acquired Panda Security in June 2020).

However, they do not have the same means as their larger counterparts to provide financial support for channel partners and end customers during the COVID-19 pandemic. For example, Cisco is offering its customers an option to defer 95% of payments until 2021, and Palo Alto Networks has created a financial services arm to offer financing for multi-year engagements. The disparity between the market-leading vendors’ financial might and that of certain private-equity-backed (particularly early-stage) vendors may enable Check Point, Cisco, Fortinet and Palo Alto Networks to acquire technology and market access (and therefore accelerate their growth) at discounted prices.

Palo Alto Networks has outgrown its main competitors by taking greater acquisition risks and accepting the negative impact of this on profitability. Check Point has lost ground, but its more-cautious approach to revenue growth may provide it with stability in the coming challenging economic climate.

1 NortonLifeLock’s revenue decreased by 48% year-on-year due to Symantec’s sale of its Enterprise Security business to Broadcom. Other vendors that experienced a year-on-year decline in revenue are NetScout (–2%), Forcepoint (–6%) and Forescout (–24%).

4 Cisco is excluded from this table because it reports a more-limited set of metrics related to its cyber-security business.

6 Security revenue in the case of Juniper Networks.

SASE: what it is and what it means to telecoms operators

SSE or SASE: vendors need to consider the implications of a failed strategy