Service guarantees for consumer broadband: marshalling the defence of the Wi-Fi empire


"When many broadband connection speed increases are of questionable utility, a genuinely useful and noticeable improvement to connectivity should be directly monetisable."

In November 2018, BT announced what it claimed as a world first: a whole-house service guarantee for consumer Wi-Fi in the UK. This comment discusses the importance of this kind of service differentiation and highlights the longer-term potential battles that are looming for control of the home indoor space.

Subscribers to BT's Complete Wi-Fi service are sent BT's new Smart Hub 2 plus one Wi-Fi 'Disc', which together form a simple mesh network. The My BT app guides customers on how to optimise the location of the hub and disc. If this does not provide a 'strong' signal in each room, customers are sent up to two further discs, and if this does not work, they receive a reimbursement of GBP20. BT's terms and conditions do not make it clear what exactly constitutes a 'strong signal'.

KPN is working towards a more-clearly defined service guarantee; it guarantees 20Mbps in every room in a house and aims to increase this to 50Mbps. Again, an app guides the end user in setting up a network, allowing users to manually configure the access points (APs) that they already have. If using the app does not provide the advertised speed in each room, KPN will send up to two new APs per household. If the additional APs do not resolve the problem, KPN will send an engineer. One obvious drawback to the KPN approach is that the additional APs must be wired to the main modem, whereas the BT discs are connected wirelessly. Although the KPN approach is likely to deliver greater performance enhancement, the need to deploy one's own wiring is a significant trade-off.

Most broadband service providers (SPs) now aim to make the home network a differentiator. The cost of managing the service – and of new customer premises equipment (CPE) – can be recouped in four ways.

One timely way of mitigating the cost is to make indoor network optimisation a feature of FTTH installations. KPN makes a virtue out of a necessity by doing this. Mobile operators could try to play on the convenience of self-installation for some fixed–wireless services, but if an FTTH installation is not just a hassle and delivers something more, then it increases FTTH's relative attractiveness. Interestingly, though, Verizon's 5G Home service always has an engineer visit and also comes with whole-home Wi-Fi installation.

Service providers should not be complacent about the apparently unassailable model of a single broadband pipe to the home (which could be wireline or fixed–wireless) coupled with an indoor Wi-Fi network. A guaranteed indoor network is one way to make sure that parts of the broadband/Wi-Fi empire do not fall into MNOs' hands.

When 5G is being touted by vendors as 'the network to replace all networks', it is worth remembering the extraordinary dominance of Wi-Fi as a means to access the Internet. The number of Wi-Fi-connected devices is, we estimate, at least double the number of SIM-enabled devices; total IP traffic on Wi-Fi is about 6 times greater than mobile; and if Wi-Fi APs are counted as small cells (which is what they are), then the number of cells is about two orders of magnitude greater than mobile.

Wi-Fi and mobile generally act as functional complements, but the boundary is shifting. Public Wi-Fi is in relative decline because more people have sufficiently large, affordable data plans. However, as Figure 1 shows, public Wi-Fi traffic is a miniscule subset of total consumer Wi-Fi traffic. 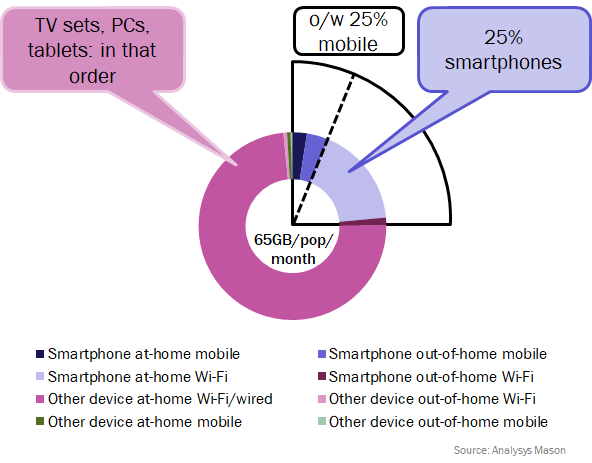 Wi-Fi looks unassailable as the default network for the home. However, could public Wi-Fi be just the first, and softest, kind of Wi-Fi network to fall to unlimited mobile? Could many households manage without the single-pipe model?

Unlimited mobile data is not a great threat to broadband if each device requires a separate SIM. Some mobile operators (mainly in the USA) already offer unlimited multi-SIM bundles for households, with progressive discounts for each additional device. Decoupling accounts from SIMs and giving unlimited mobile data per account rather than per SIM, might be a genuine threat. It will not happen before 5G, and mobile-centric operators will not be happy about diluting yield so much, but they do not have many other options to wrest consumer spend from broadband providers.

There is patchy evidence of a shift from Wi-Fi to LTE on smartphones in the home. Larger data packets reduce the disincentive to use cellular. It is, however, easy to exaggerate the contribution of smartphones to total traffic: they account for only about 20–25% in more developed markets. Moreover, they are the only kind of common device that has a SIM as a default. The huge installed base of Wi-Fi-only devices makes substitution harder.

Current capacity 5G spectrum-bands are simply too low-quality to propagate far beyond the first wall. There have been proposals to converge the 802.11 family with 5G, but it is difficult to see what the consumer benefit would be. In the longer run, though, 5G will use other, better, spectrum bands, and by then could pose a threat to the single-pipe broadband model. It is therefore important for broadband SPs to start marshalling the defence of their indoor empire now.