4G adoption is growing in the Middle East and North Africa region and our latest Connected Consumer Survey results indicate that this trend is correlated with increased data usage. A higher data allowance also strongly influences customers in selecting their next mobile plans.

Our survey also revealed that level of data consumption is highly correlated with customer satisfaction. Facilitating subscribers’ moves to larger data plans could therefore be key to improving operators’ Net Promotion Scores (NPSs),1 which are relatively low compared to those in other regions. This comment presents some of our survey results to demonstrate the potential benefits of encouraging users to upgrade to higher data tiers.

Consumers appear to move to higher data allowances when they migrate to 4G. Obtaining a higher data allowance was also the main factor influencing respondents’ selection of their next mobile plan (if they intended to change their plan within the next 6 months). It was even selected ahead of other factors that have previously been cited as the most attractive features of a new plan, namely:

This result indicates that there is clear demand for more data among our respondents and that they are less concerned about network performance and pricing in comparison. Operators should therefore consider moving customers to larger data plans at the same, or potentially higher, price points. They should offer more intermediary data tiers and the ability to purchase small data add-ons to encourage customers to migrate to higher data tiers. Operators should also make their out-of-bundle rates less punitive, so that they do not discourage light data users from exceeding their allowances.

NPSs are relatively low in the Middle East and North Africa compared to other regions, such as Sub-Saharan Africa. There is also wide variation in NPSs, with Zain having the highest score and Omani operators faring worst in the region (Figure 1). 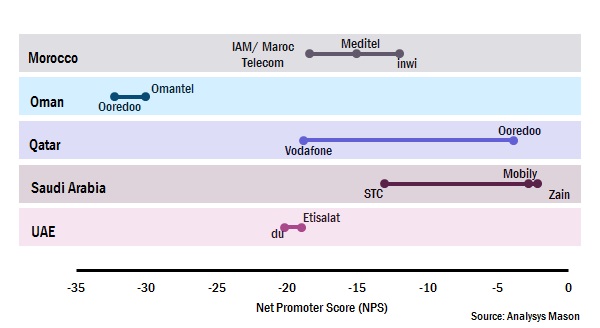 We also found that data consumption is significantly correlated with customer satisfaction in the Middle East and North Africa, with the highest data consumers often being most likely to recommend their operators. This further confirms that higher data allowances are a significant factor in attracting customers to tariffs. Offering larger and more-flexible data allowances could therefore be used as a lever to improve customer satisfaction levels.

These anomalies suggest that operators cannot rely solely on adjustments to data allowances and prices to increase customer satisfaction. They should instead experiment with different data allowance options to identify which ones yield the most positive response, and to identify and address other areas of customer dissatisfaction.

One such area is customer service. Poor customer service remains an area of concern for users in the region, with 16% of our survey respondents citing it as a reason for their intention to churn. Two operators appear to have the most problems with customer care.