2G remains a significant technology in emerging Asia–Pacific, accounting for 46.8% of active SIMs in the region at the end of 2016. The challenge for mobile network operators (MNOs) in emerging Asia–Pacific is to deliver satisfactory service to their many remaining 2G customers, while simultaneously repurposing spectrum for 3G and 4G. Both 3G and 4G generate proportionately more revenue than 2G – we estimate that 3G/4G connections generated an ARPU 3.25 times higher than that of 2G connections in 2016. MNOs should consider deploying single RAN networks and using dynamic spectrum allocation to ease the process of repurposing spectrum for 3G and 4G.

One challenge of repurposing current 2G spectrum for 3G and 4G is that many emerging Asia–Pacific MNOs do not hold large spectrum portfolios. The absence of digital dividend spectrum is particularly important, because sub-1GHz spectrum is crucial to cost-effectively establishing nationwide LTE coverage, which is still missing in many emerging Asia–Pacific markets. Emerging market MNOs that do not have access to digital dividend spectrum must make greater use of the 900MHz band to achieve nationwide LTE coverage. However, this band only contains 35MHz of spectrum and is already used for GSM. Emerging markets also often have higher numbers of MNOs than is common in more-developed markets – this reduces the amount of spectrum per MNO, including sub-1GHz spectrum suitable for widespread coverage. For example, sub-1GHz spectrum is divided between four or five MNOs in most emerging Asia–Pacific markets, but is typically divided between three players in EU member states.

Repurposing spectrum for more spectrally-efficient technologies (particularly 4G) has become increasingly urgent in emerging Asia–Pacific, as some markets in the region have higher usage per MHz of spectrum than more-developed markets. For example, traffic per head of population in Malaysia was more than double that in Germany in 2016, yet only 79% as much licensed spectrum was available (Figure 1). 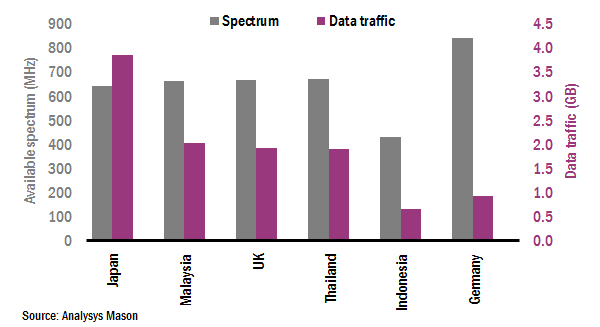 MNOs must consider their IoT technology choices when examining possible strategies for repurposing 2G and 3G spectrum. Continuing to invest in 2G and 3G IoT networks will restrict MNOs’ ability to eventually decommission these networks and allocate all the spectrum to 4G. In contrast, emerging Asia–Pacific MNOs that do decommission their 2G and 3G networks risk losing significant numbers of IoT subscribers if they do not subsidise their migration. We estimate that 70% of AT&T’s 5.6 million 2G IoT customers (as of the end of 2015) were lost because of 2G decommissioning.

Single RAN networks could ease the process of refarming emerging Asia–Pacific MNOs’ 2G spectrum for 3G or 4G. Some emerging Asia–Pacific MNOs have already begun conventional spectrum refarming, which requires that a particular block of spectrum is reallocated to a different technology. For example, MNOs in Indonesia and Vietnam have rolled out LTE with refarmed spectrum in the 1800MHz band, which was previously used for GSM. Operators deploying single RAN with both shared baseband and radio head ends will not need to replace hardware when they wish to refarm spectrum, which reduces costs and complexity.

For more information on minimising the cost and revenue impact of 2G and 3G decommissioning, see our recently published report 2G and 3G migration: challenges and investment cases for solutions.