Investment in network control and orchestration was strong in 2018, driving growth in software and services

Revenue growth in the network automation and orchestration (NAO) market was strong in 2018, increasing by 13% year-on-year, primarily because of additional spending in all three network control and orchestration (NCO) segments. This means that overall revenue for the NAO market reached USD8.6 billion in 2018. Huawei has retained its leading position in the NAO market, accounting for 19.4% of this market's revenue. The company's continued strong performance is supported by its expansive fixed and mobile infrastructure business, which pulled through sales of its network management systems (NMS) and element management systems (EMS) products. Nokia holds the second-largest share of revenue at 18.9%, which highlights the closing gap in market share between Nokia and Huawei compared with results from 2017.

The largest vendors by revenue in the NAO market are, unsurprisingly, NMS/EMS leaders (NMS/EMS spending still accounts for 75% of NAO spending). Mobile network operators (MNOs) that are preparing for 5G launches in 2019–2020 have nurtured NMS revenue back to growth, albeit only 1% growth year-on-year, which was very much in line with expectations. Some vendors, notably Nokia with its NetAct virtualised mobile network management system, have modernised NMS for 5G using a cloud-native, microservices approach and were able to monetise value-added features to great effect.

The NCO market is still developing but vendors such as Cisco, Nokia and NEC/Netcracker are emerging as the market leaders

Cisco, Nokia and NEC/Netcracker occupy the top three positions in terms of revenue market share and all had shares of at least 10% in 2018. The top-six players overall have not changed since 2017, but as a group they account for less of the market than the previous year, and there is no standout leader across all three segments. NCO spending increased by 76% in 2018. The investments made by early adopters of orchestration and related professional services (such as those offered by Netcracker) are beginning to pay off, with spending on network orchestration more than doubling year-on-year (106% growth). Network function virtualisation (NFV) deployments of all types increased in number and scale in 2018, supported by OpenStack and non-Openstack VIM. Despite considerable growth in the number of deployments and spending, CSPs generally remain cautious about digital network operations platforms (DNOPs) because industry expertise in the area of automation is still limited. Consequently, integration services have become a key component of professional services revenue, of which NCO services revenue grew to account for 29% of professional services revenue, representing an increase of 19% from 2017. 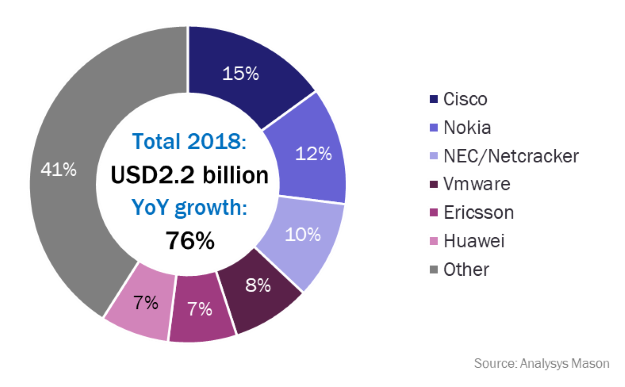 Many vendors are supplementing their NCO suite of products with related automation applications, however these applications have yet to become significant drivers of revenue. The strongest revenue driver for Cisco is WAN SDN, an area in which the company has a very large revenue lead. Nokia's strong performance across all three NCO subsegments puts it in second place for NCO overall. NEC/Netcracker's dominance in the network orchestration (NO) market is a result of its flexible and modular platform (NC12), pre-integrated solutions (such as Netcracker Business Cloud and Network Domain Orchestration) and its solid professional services capabilities, which together have helped it to become one of the top three vendors in the NCO segment. VMware rose to fourth position thanks to strong growth in product revenue from its virtual infrastructure manager (VIM) and SD-WAN (VeloCloud) solutions. Ericsson and Huawei are just behind the top-four vendors. Both have a large number of NCO customer wins; Ericsson is stronger in VIM and NO, and Huawei performs well in WAN SDN due to its packet/optical strength.

Nokia and Ericsson are strong players within the NO market, due to their successful platforms (Cloudband and Ericsson Dynamic Orchestration, respectively), as well as their virtual network function (VNF) solutions, which have helped them to attract CSP customers. The vendors that appear in the next three positions of the market share ladder in the NO subsegment are Amdocs, Huawei and Accenture. Accenture is a systems integrator and is therefore focused on professional services, and Amdocs and Huawei have yet to build broad go-to-market capabilities, unlike the top three vendors.

Growth in SD-WAN and multi-layer control were drivers of growth in the WAN SDN segment. Cisco stands out in WAN SDN due to its broad portfolio, which includes its NSO and WAN Automation Engine, the Meraki and Viptela SD-WAN solutions and the Crosswork Network Automation application portfolio. Cisco dominates the share of revenue in this segment, accounting for 31% of revenue, with Nokia in second position with a share of 11%. Product-related offerings account for these differences in the share of WAN SDN revenue, whereas the share of revenue from professional services in this segment is split more evenly, with the top six vendors possessing between 8–11% of revenue each.

The increase in the number and scale of NFV deployments has led to an increase in virtual infrastructure manager (VIM) spending, with overall revenue growing by 78% in 2018 to reach USD561 million. Some operators such as AT&T have elected to launch their own cloud environments and are asking vendors to onboard VNFs to it rather than to supply their own full stack. CSPs are also opting for container-based approaches rather than VMs for their cloud solutions. The largest players in the segment, VMware and Red Hat, cater to the broader IT industry and are focused on multi- and hybrid-cloud deployments delivered through products and product-related services rather than professional services. The more telecoms-focused vendors such as Nokia, Ericsson, Huawei and Cisco have retained a focus on integration-related professional services.

The NCO market is still nascent and vendors will need to be strong in at least two out of the three NCO sub-segments to maintain a strong position in this rapidly expanding area, but there is ample opportunity for specialists to do well (Red Hat is a prime example in the VIM product market). The lack of expertise in the areas of automation and orchestration within the CSP community is creating a barrier to the deployment of these platforms. Professional services for integration will play a key role in encouraging CSPs to fully embrace automation and orchestration platforms.