Changing investment patterns will force cablecos to open their networks


"The focus in the gigabit-fixed-access sector will shift away from retail ARPL and towards tenancy ratios and land-grab; a sector quite similar to that of towercos could emerge."

There have been signs of disruption to the European cable sector’s broadband business model in recent weeks. The sector is moving towards using a wholesale model, either as a result of regulatory pressure, or, more significantly, as a result of competitive pressure. This comment shows why this is happening now.

In July 2019, the EC granted conditional approval of Vodafone’s acquisition of four cable networks in the Czech Republic, Germany, Hungary and Romania. One important condition that was imposed was that a third party should be granted wholesale access to Vodafone’s cable broadband network (along with access to the RF TV) in Germany; this is something that had already been commercially agreed between Telefónica and Vodafone in May.

As recently as 5 years ago, there was virtually no wholesale cable broadband access offered, let alone taken, except in the odd cases where European incumbents still held cable assets. In the early 2000s, NTL (now Virgin Media) struck a commercial deal with AOL UK that fizzled out, probably because AOL UK seriously overestimated the value of the service layer that it offered compared to that of connectivity. Wholesale cable access is now becoming quite common. Some regulators are concerned about emerging duopolies and have imposed wholesale access obligations on cablecos as a preventative measure: for example, on VodafoneZiggo (Netherlands), Brutélé, Nethys and Telenet (Belgium) and Cogeco, Québecor/Vidéotron and Rogers (Canada). Vodafone Germany’s agreement with Telefónica looks as if it will obviate the need for a full reference offer, but without it, Vodafone’s acquisitions could not have gone through.

Cable bitstream is characterised by having only a small number of possible POIs, and by significant traffic charges. Compared to operator alternatives, cable bitstream appears to be a bit inflexible. As far as we know, there are no services in Europe that allow an operator to interconnect at CMTS headend level, for instance. There appears to be only seven possible POIs among the three Belgian cablecos that offer bitstream, whereas we believe that there are around 100–150 headends across Belgium.

Figure 1 gives an indication of the pricing of cable bitstream across the world taken from Analysys Mason’s Wholesale FTTx tariff tracker. It assumes an average of 250GB per month per line, which is equivalent to an aggregate peak bandwidth per line of 1.5Mbit/s.

Figure 1: Sample cable bitstream tariffs and the nearest current non-cable equivalents (from Proximus, KPN and Bell Canada) in Belgium, the Netherlands and Canada 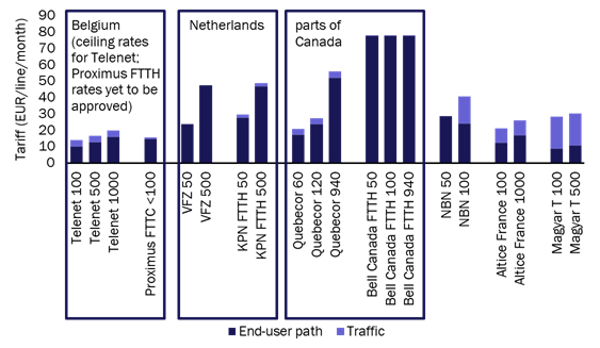 Figure 1 provides an indication of the costs of the non-cable equivalents in Belgium, the Netherlands and Canada. The costs are broadly similar in Belgium and the Netherlands. However, the differences in Canada are stark: cable is much cheaper, especially at lower speeds (Bell Canada has identical pricing for all FTTH speeds). The figure disguises the technological drawback of DOCSIS: it has a much weaker uplink than GPON, typically only one tenth of the bandwidth. Bell Canada’s FTTH services are all symmetrical.

Virgin Media was considering opening up all of its broadband networks to third parties, according to a report in April 2019.1 This was not confirmed. Parent company, Liberty Global, said in July 2019 that it was seeking joint-venture partners (including infrastructure funds) for a new rural build that would use Virgin Media as the anchor, but not exclusive, tenant. This is a model similar to that used by CityFibre and in some of Deutsche Telekom’s ventures. Virgin has stated that it aims to upgrade all of its networks to gigabit capability by 2021, making them closer to FTTH/GPON in terms of their capabilities.

There is more profit in the lower layers

So why should cablecos open up their networks voluntarily? After all, few, if any, of those that had access obligations imposed on them embraced the idea. However, we think that Virgin Media’s possible plans could pave the way for others to follow suit. Cable operators will be looking to defend their assets as FTTH coverage increases and new players enter with aggressively priced offers. Mobile-only operators will be looking at options for home broadband, and open networks represent an opportunity for cable that FTTH players will not be able to match in terms of coverage. The widespread roll-out of gigabit-capable mmWave variants of 5G fixed-wireless access (FWA) might theoretically provoke the same effect, but there are reasonable doubts about the economics of this technology. By opening up their networks, cablecos will shift the emphasis from maximising retail average revenue per line (ARPL) to maximising network utilisation and, where they extend their footprint, onto land-grab. Their model will start to look more and more like that of towercos, chasing large, long-term contracts and maximising tenancy ratios for their assets.

Cable broadband conversion rates in Europe do not change greatly over time, on the whole, and are often unimpressive compared to those in North America, especially where there are multiple infrastructure-based operators (Figure 2). 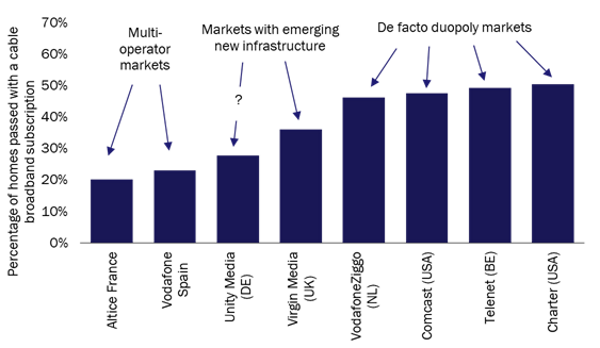 The risks from opening up a cable network voluntarily are that new wholesale connections represent a missed retail opportunity and start displacing existing retail connections. Looking at this from the perspective of margin, rather than revenue-split, indicates why it still makes sense. Offering simple access at a wholesale level (Layer 1 or Layer 2) is far more profitable than in the higher layers. Wholesale-only FTTH plays can expect 60–70% EBITDA margins depending on circumstances, whereas the service layer dilutes profitability under almost any circumstances. There is probably more margin in a EUR20 wholesale ARPL than in the rest of the retail ARPL. Going pre-emptively for a slice of the competitive wholesale gigabit market before much of it gets built looks to be an attractive option as retail margins erode under pressure from video OTTs and, gradually, from new FTTH alternatives; the gains from opening up look greater than the threats from drift. Therefore, securing a deal with a single large third party (as Vodafone has done with Telefónica in Germany) or just opening up anyway are perhaps the sort of things that cablecos are going to want to do whether or not they are mandated to by the authorities.

We believe that the telecoms world is slowly but inexorably moving towards a more vertically separated model of local infrastructure plays and highly digital, network-independent service offerings. The cable sector has already been disrupted at the video service end of things by so-called over-the-top providers. However, cable will also be disrupted, like all vertically integrated fixed telecoms operators, by under-the-floor players, and the possible introduction of a wholesale service is an early signal that it is having to adapt.