"Operators may be better positioned to sell other services than they think."

Telecoms operators have low Net Promoter Scores (NPSs), often in single figures, as we have written about previously. However, the simplicity of the NPS (a single number that is used to judge how well an organisation is serving customers) masks a more positive message. For many customers, the current performance of their operator may indeed be good enough for them to consider purchasing additional services such as security.

Operators should therefore look at the distribution of results of an NPS survey, rather than focus solely on the single NPS figure. This may help them to uncover the best targets for cross-selling other products to.

Most customers are at least neutral towards their service provider

The calculation for NPS is simple. Customers are asked to rate how likely they are to recommend a service provider on a scale of 0–10 (where 0 is not at all likely, and 10 is extremely likely). Customers giving a 6 or less are classed as detractors, and those giving 9 or 10 are promoters. The remaining customers (those who gave 7 or 8) are classed as neutral. The NPS is calculated by taking the percentage of respondents that are promoters, subtracting the percentage of respondents that are detractors and multiplying the result by 100.

The NPS for fixed services for businesses is just +7 (according to our recent survey), but this result ignores the distribution of ratings given. Figure 1 shows businesses’ likelihood to recommend their fixed service providers. 38% of businesses were ‘neutral’ towards their operator, giving a score of 7 or 8, and a further 34% were positive, giving a score of 9 or 10. 19% of the remaining respondents gave their operator a score of 5 or 6. Operators may therefore only need to make marginal improvements to the service received by their customers to improve their NPS. 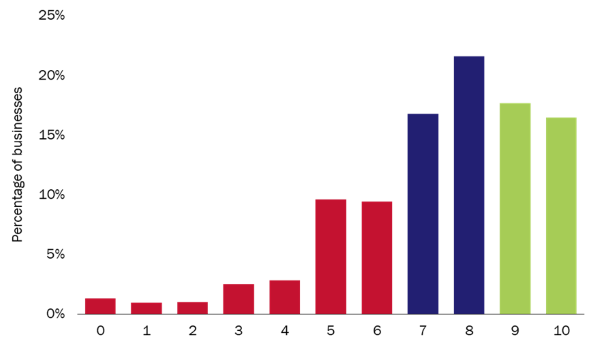 There is also a strong relationship between a customer’s likelihood to recommend their provider and their intention to churn. 26% of detractors told us that they intend to switch providers in the future, compared to 11% for neutrals and 8% for promoters.

A neutral rating may be good enough

We asked respondents of our survey whether they would consider their fixed services provider as a supplier of various other services. Figure 2 shows the responses for the specific case of security services, for two size categories (up to 250 employees and 250–1000 employees). This demonstrates that the distribution of ratings matters; even neutral customers would at least consider their fixed provider as the supplier of other services.

Figure 2: Percentage of businesses in each category that are willing to consider buying security services from their fixed service provider, by business size, surveyed countries, 2019 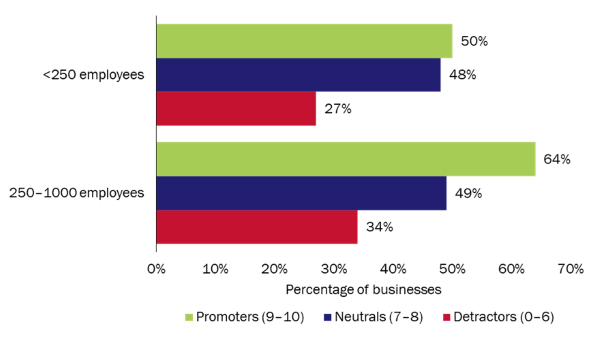 We asked the same question for other services such as unified communications and software. The results for each were slightly different, but the main message remained; as long as a customer is at least neutral towards their fixed provider, they may well consider it for other services.

The implications of these results are as follows.

COVID-19: operators’ business revenue results from 1Q 2020 show that the crisis is starting to take effect

COVID-19: telecoms operators will not be immune to the impact of the outbreak – recovery could take up to 4 years