The impact of Facebook's connectivity initiatives: sub-Saharan Africa and ASEAN

Access to the Internet is increasingly important throughout the world as a means for people to communicate, learn, work, trade and participate fully in everyday life. There is no better illustration of this than what many of us are living through at the time this report is being published, in the middle of the COVID-19 pandemic. People use the Internet to access content and services that can be provided from anywhere in the world, allowing connections between friends, strangers, businesses and customers that were unimaginable a generation ago. These connections are achieved through an interconnected network of networks that enable information to be exchanged between a shopkeeper in Kinshasa, a supplier in Seoul and a customer in Jakarta.

The infrastructure required to provide this connectivity has seen rapid developments everywhere in the world. However, across the countries of the Association of Southeast Asian Nations (ASEAN) more than half of the region’s population remains unconnected, and an even greater proportion in sub-Saharan Africa, where digital infrastructure remains scarce compared to other regions of the world. This reflects the connectivity gap between urban centres and rural areas, and the difficulty of making a return on investment in places where populations are sparse and incomes are low.

In response, Facebook has launched a range of connectivity initiatives aimed at tackling these barriers, by providing financial and technical inputs that can make infrastructure easier and cheaper to deploy. These initiatives contribute to Facebook’s mission “to give people the power to build community and bring the world closer together”, by using applications and online services provided by Facebook and other providers, accessing the wealth of content available on the Internet, and creating their own content and services. These initiatives fall broadly into two categories.

First, Facebook invests in network infrastructure, either directly building or buying through long-term contracts. These investments include fibre backhaul and edge network infrastructure including points of presence and caches in operators’ networks in nearly every country in both regions. Facebook is also investing in submarine cables that will transform international connectivity in Africa and increase supply in ASEAN.

Second, Facebook has developed programmes through which it works closely with telecoms operators and Internet service providers to improve connectivity, typically using innovative platforms and technologies that can improve the economics of network deployment and operation. These initiatives are primarily focused on access network infrastructure and aim to support operators and service providers in bringing more people online by extending network coverage and improving service affordability. In sub-Saharan Africa and ASEAN, these initiatives include Wi-Fi solutions, rural access initiatives, and innovations that lower the cost of rolling out broadband.

These initiatives create socio-economic benefits for consumers, businesses and governments throughout sub-Saharan Africa and ASEAN. Individuals benefit through increased access to information and services, which leads to improved quality of life, health, education and income. Businesses benefit from increased organisational efficiency and ease of reaching and communicating with customers. Finally, governments can use better connectivity to boost efficiency and transparency, as well as increasing the reach and quality of e-government services.

In regions where connectivity challenges remain high and Internet usage is still limited to a minority of people, even modest improvements can have a significant effect on outcomes. We estimate that the economic benefits stemming from Facebook’s connectivity initiatives could exceed USD50 billion in sub-Saharan Africa and USD70 billion in ASEAN over the next five years (2020–2024), in nominal GDP terms.

The biggest impact by far is linked to Facebook’s investment in international capacity and edge infrastructure, which allows operators to offer much more data to end users, and benefits all Internet users (nearly 500 million people by 2024). Facebook’s initiatives with operator partners are enabling millions of people to get online earlier than they would have otherwise, already helping to extend or improve broadband coverage to 4 million people in Uganda and Nigeria and an estimated 10–15 million people in Indonesia.

While these initiatives all contribute greatly to a better Internet, making it accessible and affordable to more people in sub-Saharan Africa and in ASEAN than ever before, they are only part of a complex solution that requires all stakeholders – including operators, Internet companies and governments – to work together for the common good. 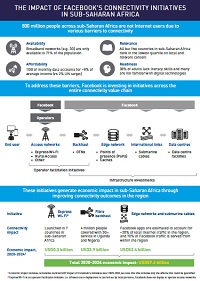 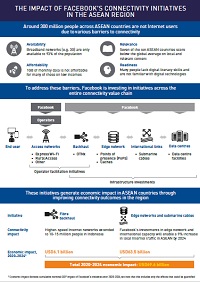 The impact of Facebook's connectivity initiatives in sub-Saharan Africa

The impact of Facebook's connectivity initiatives in the ASEAN region