"Incumbent operators' enterprise divisions have experienced substantial declines in mobile ARPU, resulting in a widening gap with their consumer counterparts."

Most incumbent telecoms operators in high-income countries are reporting a considerable gap between the performances of their enterprise and consumer divisions. Enterprise divisions have experienced substantial declines in mobile ARPU as competition in the enterprise market has intensified. Rising demand for data has failed to offset declines in other services, but operators have the potential to reverse this decline in enterprise revenue as ARPU stabilises and growth opportunities in new services arise.

This article examines the financial performance of incumbent operators’ enterprise and consumer divisions in high-income countries and the reasons for the current divergence in these divisions’ growth rates. 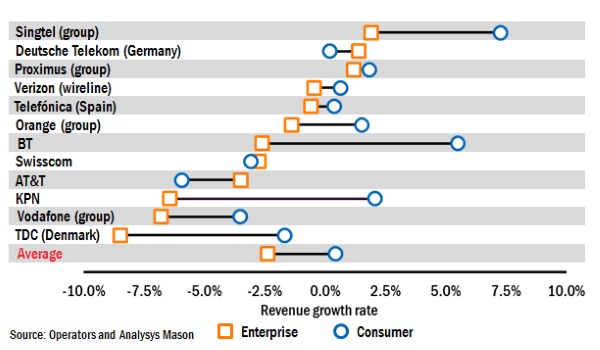 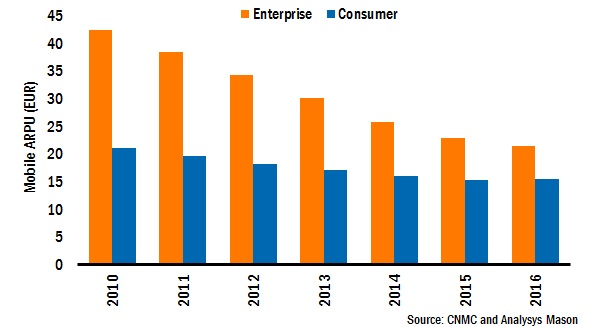 The improving trend in consumer revenue could indicate the future trajectory of enterprise revenue. Consumer revenue is now flat (on average), following several years of decline, and is even rising in some countries (Figure 1). Some of the factors responsible for declines in enterprise revenue are now weakening (for example, declines in mobile ARPU are slowing and the migration from legacy services is largely complete), and there is growth in new service areas, such as security. Operators may therefore be better placed to stabilise or even grow their enterprise revenue.

2 We only considered large incumbent operators, as smaller operators often do not provide a split of enterprise and consumer revenue.

Results of our survey of 1600 enterprises