IoT continued to be a reliable source of growth in 2018


"IoT revenue as a share of mobile revenue is similar for most operators, but this is not the full story: Vodafone is performing well in IoT, Verizon is losing out, except in telematics, and Telefónica is doing worse than both."

The IoT growth levels in 2018 were similar to those in 2017 for the few operators that report IoT data. The total revenue increased by approximately 15% year-on-year, and the number of connections grew slightly faster (typically by 20–30%). This stability does not make the results less interesting; IoT is proving to be a reliable source of growth.

This article explores the 2018 results in more detail, and is based on our ongoing tracker.

At the pre-Mobile World Congress 2019 analyst briefing, Nokia CEO Rajeev Suri said that the share of operator revenue that comes from IoT will go from “around 2% today to 10% in a decade’s time”. Both figures look high. Of the operators that regularly report on such metrics (KPN, Telefónica, Telstra, Verizon and Vodafone), only Verizon and Vodafone earn more than 1% of their total revenue from IoT. Furthermore, this is a self-selecting group of operators that are active in IoT; for most other operators the figure is lower still. A figure closer to 0.5% is probably typical, based on our private conversations.

IoT revenue as a share of mobile revenue (that is, excluding fixed and other revenue) falls within a narrow band of 2.5–2.8% for four of the operators (Figure 1). The result is surprising given the varied nature of the IoT businesses of these operators.

Figure 1: IoT revenue as a share of total mobile revenue 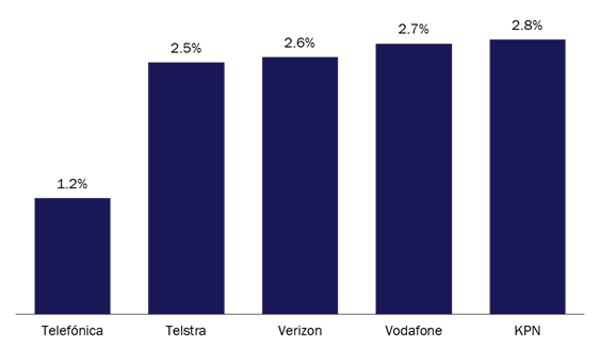 Verizon has made notable investments in acquisitions (of over USD3 billion) which have led to significant telematics revenue (USD242 million in 4Q 2018). This strong performance in telematics may be balanced out by a weaker performance in other aspects of IoT. For example, it may be losing out to AT&T, especially in the automotive sector. (The relatively high mobile handset revenue in the USA may also be supressing Verizon’s IoT revenue share compared to that of operators in other regions.)

Vodafone is also not outperforming the others, which is a surprise given its reach and success in the automotive sector. This is due to the denominator (that is, the total mobile revenue); more than a quarter of Vodafone’s mobile service revenue is from non-high-income countries (for example, South Africa and Turkey) where IoT is less developed. If only high-income countries are considered, IoT revenue probably forms around 3.4% of Vodafone’s total mobile revenue.1

Telefónica is the exception in this group, and only 1.2% of its mobile revenue comes from IoT.2 Its footprint provides some explanation for this; around half of Telefónica’s total revenue comes from Latin America, where the penetration of IoT services is reasonably low. Even so, Telefónica is almost certainly underperforming other operators in high-income countries, possibly because IoT is less well-developed in Spain than in other high-income countries. Even if 90% of Telefónica’s IoT revenue was generated in Europe (and the actual the figure is probably lower), IoT revenue would still only account for around 2.0% of European mobile service revenue, which is below the 2.5–2.8% range of other operators. Telefónica has been closing this gap recently, and its 2018 total revenue grew by over 30%.

Caveats are needed again: the success of an operator in the handset market will affect results, definitions of IoT differ slightly and the metric in question does not take the widely varying revenue levels per SIM into account. However, the data is still useful for understanding the market, despite these caveats.

Figure 2: The number of IoT connections as a percentage of the total number of mobile connections, selected operators

The results from KPN and AT&T show that figures exceeding 30% are achievable. Telefónica’s results are notable again, and just 7% of its mobile connections worldwide are used for IoT. Telefónica’s results illustrate the development of IoT across different countries, and show that IoT penetration is much lower in Latin America than elsewhere. In Peru, for example, only 1.6% of Telefónica’s mobile connections are used for IoT. However, the figure is far higher in Brazil (11%), Telefónica’s largest market in the region. Telefónica’s figure in Spain (13%) is lower than the equivalent for other high-income incumbents. Again, we suspect that this is mostly due to the Spanish market rather than Telefónica’s actions. Indeed, Orange Spain has a similar figure (12%).

Telstra and Telefónica report that revenue is growing faster than the number of connections. For both KPN and Vodafone, however, growth in the number of connections outstripped revenue increases. We hesitate to read too much into these figures though, because changes in the revenue mix (that is, the split between recurring connectivity or other service revenue, and one-off hardware or professional services) may be causing ‘lumpy’ revenue growth. However, we do expect that price competition for IoT services will continue to be intense, especially in more-mature high-income countries; this may partly explain the challenge of falling revenue per connection for KPN and Vodafone.

It will become more difficult to make comparisons

The operators included here offer a similar mix of cellular technologies. LPWA networks have yet to make a major impact for most. As more technologies are adopted, and as the mix of networks offered by each operator changes, a comparison of connection numbers is likely to become less valuable. Equally, the comparison of revenue will be harder because each operator will have a different mix of hardware, connectivity, application and professional services revenue. For some operators, we understand that the share of IoT revenue coming from elements other than connectivity is approaching 30%. Ideally, we would like operators to provide not just IoT revenue figures, but also some more detail on the breakdown of this revenue, as this would provide a much better way to understand the how their IoT businesses are performing.

1 This assumes that 90% of Vodafone’s IoT revenue comes from high-income countries.

2 Telefónica reports the split of mobile and fixed revenue for all countries except for Spain. We have assumed that 40% of Spanish revenue is from mobile (this is broadly in line with the domestic revenue split of other European operators).

Cellular drones may not generate significant revenue for operators, but they can provide other benefits