Operators have plenty of scope to upgrade consumer plans; charging extra for the upgrade is the challenge


"Verizon’s success in migrating customers to unlimited plans gives a target for other operators."

Verizon reported in its 2Q 2022 results that 78% of its customer base was on an unlimited plan, up from 69% a year earlier. ARPA increased from USD120 to USD124 in the same time frame, helped by this migration to unlimited contracts.

Most other operators have a far lower share of customers on unlimited plans. They should target a very high level of penetration for unlimited plans; over 80% looks like a realistic target, based on the Verizon data. This is good news; it should help to increase revenue as long as they can increase ARPA as part of the migration process.

The same basic message also applies to fixed broadband. The adoption of the fastest consumer broadband plans (typically 1Gbit/s) is still low, which suggests that there is potential for increased take-up. This potential from the basic connectivity business should not be overlooked at a time when consumer revenue growth seems hard to achieve.

Perhaps ironically, the high penetration figures for unlimited mobile plans are probably less good news for Verizon than for other operators. Verizon believes that there is “room for more” ARPA growth driven by the shift to unlimited plans, but it has limited headroom. It will need to use other reasons, such as faster speeds or access to content, to encourage migration to more expensive plans. The same challenge will face all operators in time.

Few operators regularly report on the take-up of unlimited plans, but we have data on adoption from our most recent consumer survey. Figure 1 shows the percentage of respondents to our survey that either have an unlimited data plan or have at least 30GB included in their monthly allowance.

Figure 1: Respondents with data allowances of at least 30GB per month, selected countries in Europe and North America, 2022 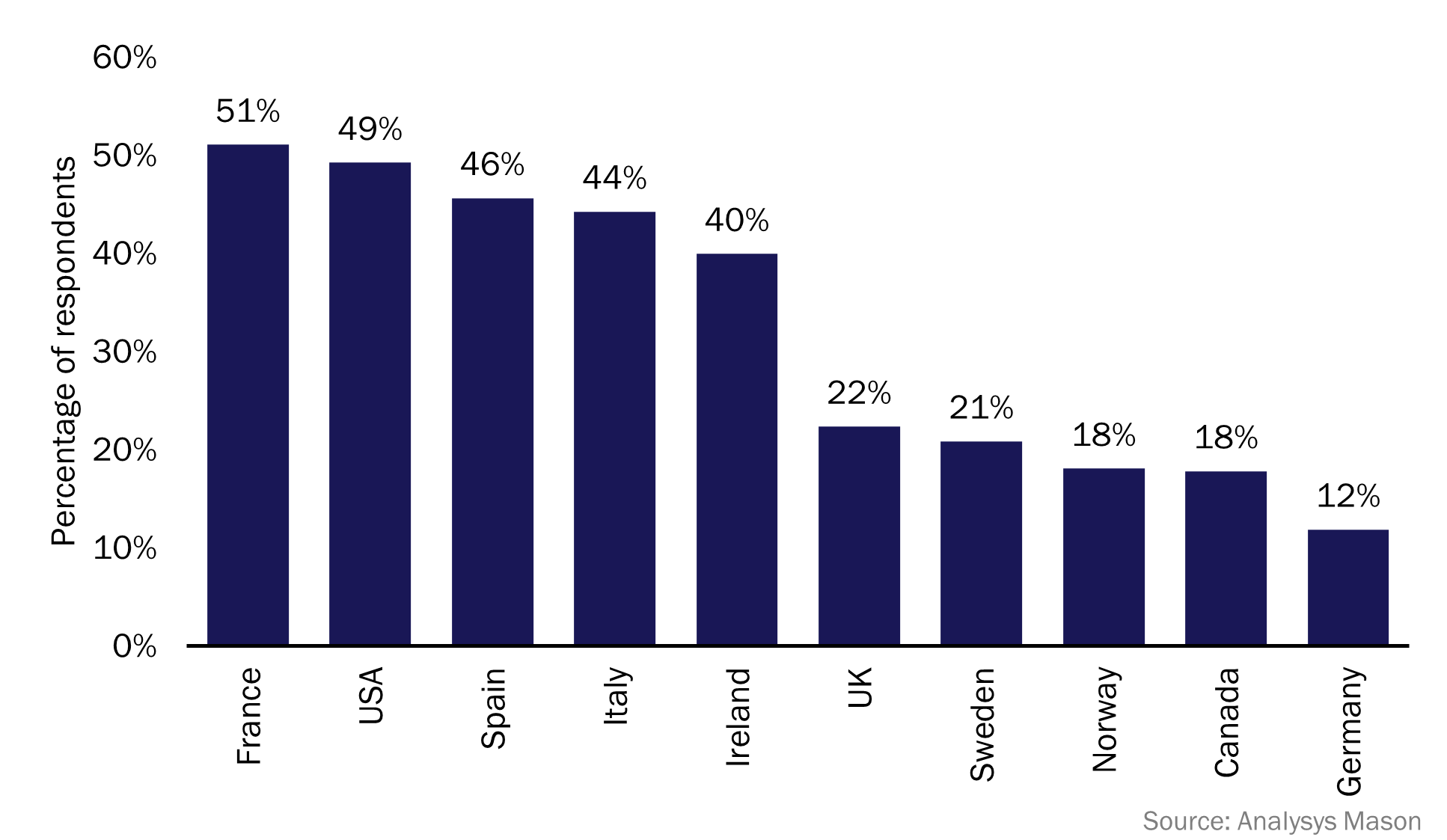 Our survey suggests that significant potential to upgrade customers to plans with larger data allowances remains in all countries, if we accept 80% penetration as a reasonable target. Operators in southern Europe, Ireland and the USA have upgraded more of their customers to unlimited plans than their counterparts in Canada and northern Europe, but this means that they have fewer customers left to upgrade.

It is also likely that operators in southern Europe, Ireland and the USA have migrated customers to unlimited plans more rapidly than those elsewhere due to competitive pressures. Indeed, ARPU has fallen faster in the past 3 years in southern Europe and Ireland than in most northern European countries.

Operators in northern Europe will be able to migrate their customers to unlimited plans more gradually and should be in a stronger position to charge extra for the additional data. As we have written about before, operators need strategies for raising prices in a time of high inflation. Simply increasing prices in return for no improvement in service is likely to prove unpopular. Bundling in extra data may help to sweeten the pricing increases.

Subscribers to 1Gbit/s broadband plans remain rare in most countries

Figure 2: Respondents with broadband speeds of more than 500Mbit/s, selected countries in Europe and North America, 2022 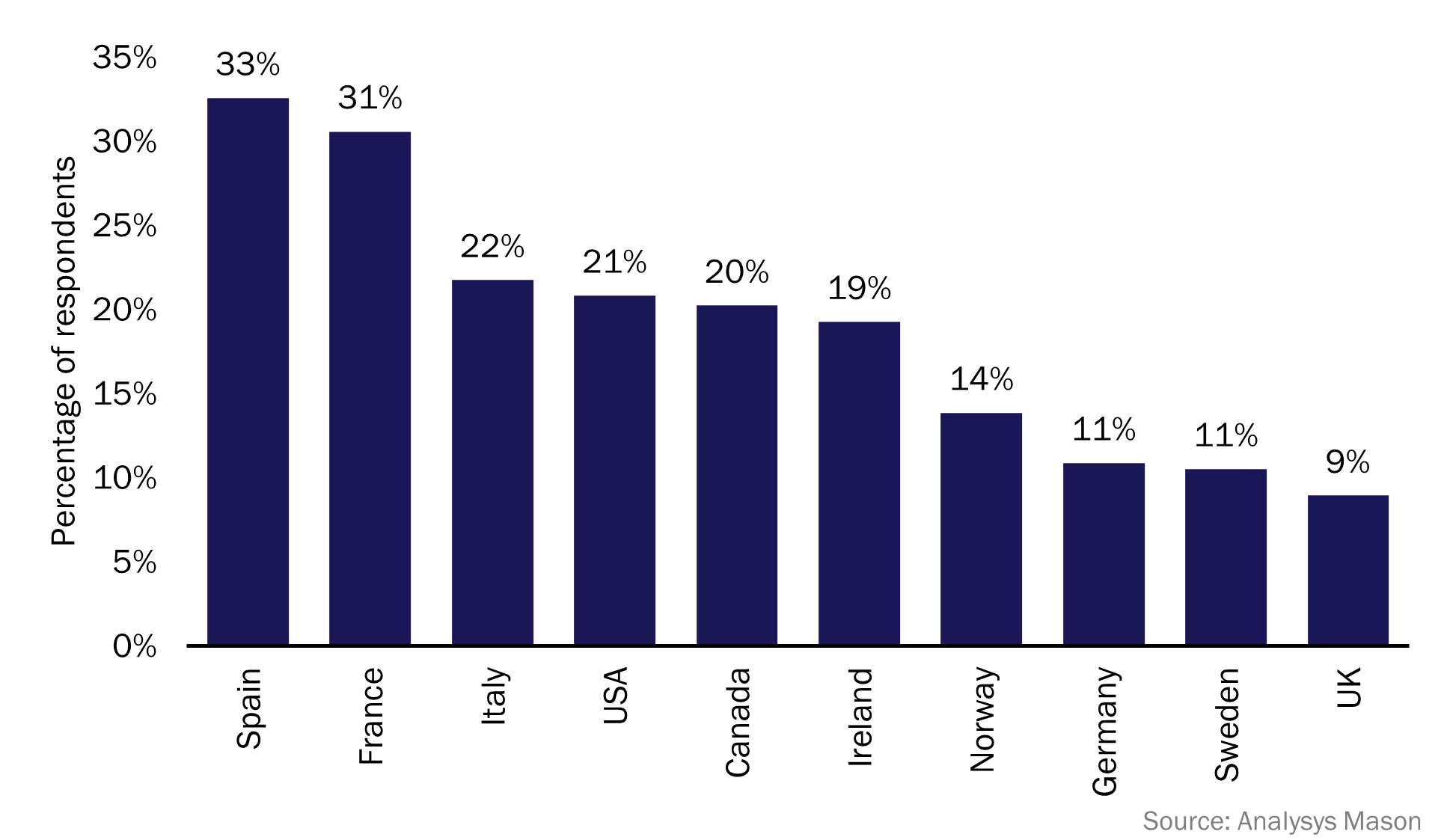 Again, southern Europe leads the way in terms of penetration, but the gap is narrower than in the mobile market. Differences between countries are driven partly by competition and availability; competition from multiple fibre networks in France and Spain is driving the take-up of higher speeds.

We expect that at least 50% of subscribers, and possibly over 75% of subscribers, will take a 1Gbit/s plan (or faster) in the longer term in most high-income countries. As with the mobile market, the survey data suggests that there is significant potential to upgrade customers.

The positive message from both the mobile and fixed markets is that plenty of potential for upgrades remains. The challenge for operators in the near term will be to charge extra for faster fixed speeds or larger mobile data allowances and not to simply give the extra value away.

Inevitably, this opportunity will fade in the longer term as the penetration of unlimited mobile plans and faster fixed plans saturates. Operators will then need to look to other services, such as the aggregation of TV and games, to justify future price rises (see Analysys Mason’s Operators considering aggregating digital content have a wide range of approaches to choose from for discussion of these strategies).