"FTTP roll-outs and subscriber take-up have proved resilient in the wake of the COVID-19 pandemic and we expect growth to continue between 2020 and 2026."

The interest in fibre deployments continues to be high among investors in infrastructure and also from end users. However, it is not altogether clear how much growth in FTTP coverage is possible, both globally and within individual countries, nor is it clear how much subscriber conversion rates will increase over time. This article summarises some of the results from our latest FTTx coverage and capex forecast and our latest FTTx conversion forecast. It also discusses the factors that will drive worldwide growth in fibre coverage and the number of fibre subscribers.

In general, the COVID-19 pandemic has done little to discourage investment in fibre infrastructure and may even have served to increase it because the pandemic has served to reinforce the value of fixed broadband connections. We are increasingly confident that large FTTP roll-outs will occur in more mid- and lower-income countries. For example, we have increased our coverage forecast significantly for LATAM, where we now expect FTTP coverage to reach 51% of premises by the end of 2025 compared to 43% in last year’s forecast. The interest in FTTP roll-outs in the LATAM region is strong and operators are increasingly turning to FTTP carve-outs as they look to expand coverage. We take a favourable view of the potential for FTTP roll-outs in emerging markets. FTTP costs per home passed are generally 5–10 times higher than FTTP line ARPU in emerging markets but are often 10–15 times higher in Western European markets.

FTTx capex worldwide will decline over the forecast period, although in the short run we forecast that it will be 7% higher in 2021 than in 2020 if China is excluded from the figures. FTTx capex levels in Western Europe over the forecast period will fall but will remain robust. This demonstrates the interest in FTTP roll-outs from challengers in countries such as the UK as well as the expansion of fibre coverage into more rural areas, for instance, driven by government broadband plans and targets. In general, we see that the opportunity for more fibre roll-outs to rural areas is stronger than is commonly perceived. Premises passed and connection costs may not vary much between geotypes because there may be clustering of premises in more-rural areas. If premises are not clustered and are in a straight line, this will also help to reduce costs. Moreover, the location of existing infrastructure such as manholes and poles that can be used to terminate the homes passed phase of the fibre roll-out may not differ significantly between urban and rural areas. In addition, the types of properties may not vary much by geotype and even in urban areas, for example, most properties may be detached houses with large front lawns.

FTTP take-up rates worldwide will not change significantly between the end of 2020 and the end of 2026. However, this conceals a complex set of regional trends. In China, FTTP conversion rates are already high, so the scope for further growth is limited. This is significant because the sheer scale of FTTP in China (and despite growth elsewhere) means that FTTP subscriptions here will still account for more than 50% of the global total at the end of 2026. 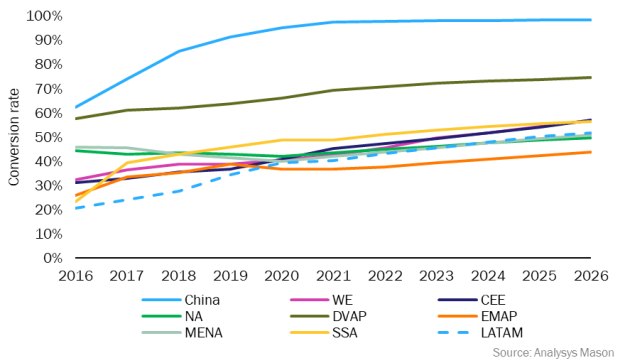 We forecast that FTTP conversion rates in both Western Europe and Central and Eastern Europe will be 16 percentage points higher at the end of 2026 than at the end of 2020, driven by increased take-up on incumbent networks as an increasing number of DSL subscribers migrate to fibre. FTTP conversion rates in these regions will continue to increase beyond 2026, reaching approximately 70% by 2030.

One of the main constraints on conversion rate growth is the continued presence of cable networks, especially in North America. In addition, we forecast only modest declines in the total number of cable subscribers in both Western Europe and Central and Eastern Europe up to 2026. Fixed-wireless access (FWA) can also take about a 10% share of fixed broadband subscriptions in many European markets and even by 2026, some VDSL subscribers will remain in areas where incumbents have upgraded to FTTP.

In emerging markets, FTTP conversion rates at the end of 2026 will reach 40–60% and will be lowest in the EMAP region (excluding China). We remain optimistic about the possibility of profitable FTTP roll-outs in emerging markets. There is evidence from different countries that households will pay 5% – or even 7% or so – of their household income on a decent quality fibre broadband connection.

Our conversion forecast assesses current outcomes and future prospects for FTTP take up in markets with different policy frameworks. Some countries in Europe (notably Portugal and Spain) have encouraged FTTP network overbuild in dense urban areas by limiting the availability of active wholesale offers and by mandating regulated duct and pole access. Such policies have had mixed results in terms of overall fixed broadband take-up. In Portugal, FTTP infrastructure competition has spurred overall market growth while it does not appear to have done so in Spain. Other countries, such as Australia, New Zealand and Singapore, have focused on having a single wholesale-only fibre provider. In such markets, FTTP conversion rates have generally been good, but where only active wholesale access is available, some retail ISPs have circumvented wholesale fibre fees by using FWA. We expect the use of FWA to persist throughout the forecast period but nonetheless we forecast fibre take-up rates of around 80% by the end of 2026 in many such markets.

FTTP migration tends to reduce churn, but the impact is nuanced and may be weaker than generally perceived