"Operators are well-positioned to play an active role in the emerging gaming sector in Saudi Arabia."

The Saudi government made significant investments into the gaming industry in 2022 via its sovereign fund, the Public Investment Fund (PIF). This signals its willingness to play an important role in the gaming ecosystem and to drive economic growth by addressing the rising consumer demand for gaming services.

Saudi telecoms operators can play an active role in nurturing the domestic gaming ecosystem (formed of gaming service providers through to consumers) by using their infrastructure, partners and sales channels. They can also benefit from growth in the addressable gaming market by supporting government ambitions.

The share of the population that are gamers is the highest in Saudi Arabia out of all countries in the Middle East. Indeed, 63% of the Saudi population are gamers according to the chairman of the Saudi Esports Federation. The country is also home to a small but growing number (about 100) of professional e-sports players and has had six e-sports world champions since 2015.

Saudi Arabia has the highest proportion of hardcore gamers and the second-highest proportion of core gamers (after Kuwait) according to Analysys Mason’s survey of smartphone users in the Gulf region (Figure 1).1 More than half of the survey respondents in Saudi Arabia that reported playing games use their mobile phones, a third reported playing on a PC and a further third said that they use games consoles (note that respondents could select more than one device).

Figure 1: Breakdown of the adult population in terms of gamer profile, Saudi Arabia, 2022 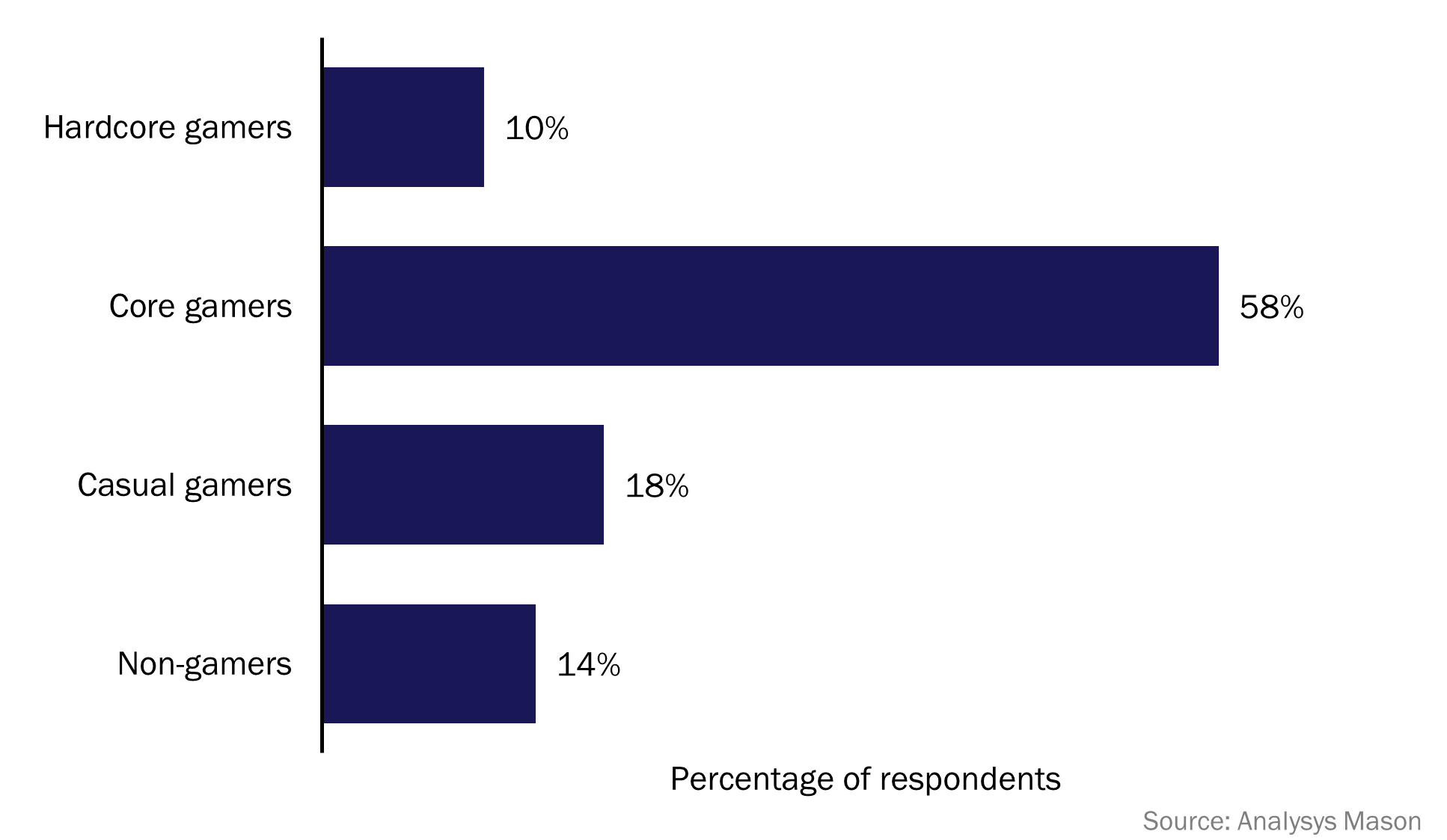 There is strong potential for growth in the number of active gamers in Saudi Arabia thanks to the large youth demographic (two thirds of the population are under the age of 35) and sizable disposable incomes. The high levels of broadband and smartphone penetration also contribute to making the market attractive to providers of gaming and e-sports services, as well as infrastructure providers such as telecoms operators.

The Saudi government is aiming to put the country at the forefront of the global gaming and e-sports ecosystem as part of Vision 2030 plan, and plans to use the revenue generated from gaming to reduce its dependency on oil. It aims to create 250 local gaming companies and create nearly 40 000 jobs, which it hopes will contribute around USD13.3 billion to its economy by 2030.

The government has been making high-profile investments in major gaming studios such as Capcom and Activision Blizzard via the PIF since 2020. It also established a subsidiary, Savvy Games Group (SGG), in 2022 that plans to invest USD38 billion by 2030 to make Saudi Arabia one of the global hubs for gaming. Around USD13 billion of this investment will be used to acquire a leading games publisher, and USD530 million is earmarked for the development of early-stage domestic gaming and e-sports companies. The government will also use its subsidiaries2 to establish 300 gaming venues by 2027 and to create a global gaming studio and incubator based in Saudi Arabia.

Gaming is important for operators because core and hardcore gamers spend more time on their handsets and more money on services than non-gamers. They are a prime target for upselling larger data allowances and faster speeds to improve the gaming experience.

Operators in Saudi Arabia have so far acted as billing partners, but they are increasingly looking to bundle gaming services to upsell their broadband packages. They have also sponsored e-sports events and have launched e-sports platforms to increase their involvement in the gaming ecosystem. For example, stc launched stc play in March 2021 and Zain launched the Playhera e-sports platform in February 2022.

The advantage of e-sports is that they extend beyond the gaming community because a large audience of consumers is interested in streaming video game competitions as a form of entertainment. The government’s investments into e-sports will encourage the creation of more teams and competitions,3 and will help to promote e-sports as a professional activity, all of which will enable operators to grow their addressable market.

Operators can also play an active role in driving the consumption of gaming services and supporting the development of the gaming ecosystem by offering the following.

Operators can support the gaming ecosystem at various points of the value chain using their infrastructure, partnerships and sales channels. Operators will have access to a broader choice of game titles tailored to local consumer tastes as domestic gaming studios mature, and this will create more opportunities to upsell data allowances and faster speeds and potentially increase retention.

1 We define the four gamer profiles based on age, intensity of gaming activity and spend on mobile connectivity. 2 These subsidiaries are ESL FACIT Group (EFG), the largest e-sports tournament organiser in the world, Nine66, a service provider for game developers, and an investment arm dedicated to attracting developers. 3 The government aims to make Saudi Arabia one of the top-three countries in terms of the number of professional e-sports players.