The logic of HPE’s purchase of Silver Peak is clear, but the price looks high


"HPE is coming late to the SD-WAN market, and it will need to fill crucial gaps in its portfolio if it is to be a credible provider of full solutions."

HPE announced its intention to buy SD-WAN firm Silver Peak for USD925 million on 13 July 2020.1 HPE will merge Silver Peak with its Aruba division, which provides LAN equipment and services. This deal is another sign that SD-WAN is increasingly being integrated into other products. This raises questions for firms that are focused only on SD-WAN, and also for other vendors that have LAN or security products, but not SD-WAN. More consolidation seems inevitable.

Silver Peak either had to buy or be bought

Silver Peak’s SD-WAN technology is well-regarded, but its security solution is only ‘foundational’ and it does not have other LAN or remote working products. Customers typically use Silver Peak’s solutions alongside those from other players such as Check Point, Fortinet and Zscaler.

Selling SD-WAN as a standalone product worked while large enterprises had a strong preference to keep their existing, best-of-breed security and LAN solutions. However, enterprises are increasingly buying SD-WAN combined with these other products. Vendors are recognising this and it is driving M&A activity, such as Palo Alto Networks’s multiple acquisitions (including its April 2020 purchase of another SD-WAN firm, CloudGenix).2 Silver Peak did not have the funds or appetite to buy the various components required to compete in this bundling market, so it chose to sell.

HPE will merge Silver Peak with its Aruba division in order to offer bundles of wired/wireless LAN solutions and SD-WAN. On the conference call announcing the deal, HPE’s management suggested that further acquisitions would be made to strengthen Aruba’s portfolio.

Silver Peak’s existing customer base (1500 customers) and revenue (USD132 million in the last 12 months) help to validate HPE’s decision to purchase, but it bought Silver Peak for its technology, not its existing business.

The USD925 million price tag is expensive compared to the cost of other, similar purchases (see Figure 1). HPE could have paid less for SD-WAN technology because plenty of independent SD-WAN companies remain. It must feel that Silver Peak’s position as one of the leading SD-WAN technology vendors justifies this price. 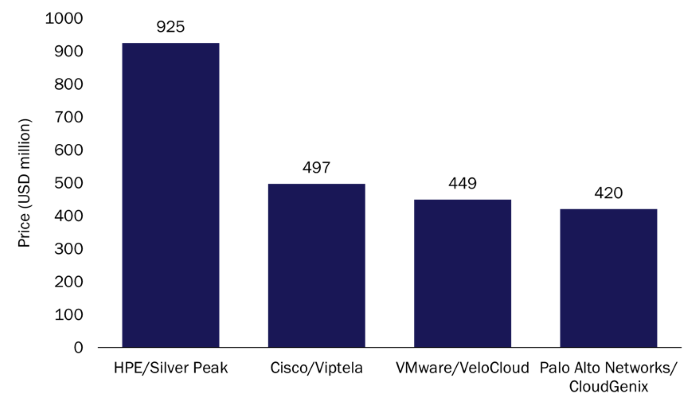 Aruba will hope to sell Silver Peak’s solutions to its customers outside of North America, where most of Silver Peak’s customer base is today. However, this geographical expansion will come with challenges.

Firstly, HPE expects that sales of SD-WAN will be driven by cost savings. On the announcement call, HPE said, “SD-WAN is reducing the total cost of ownership around [a company’s] WAN infrastructure. This is a very important vector of the growth.” However, this does not match our own conversations with companies that are selling SD-WAN in Europe and Australia. They have told us that improved performance is the major selling point of SD-WAN because the price is often similar to that for traditional MPLS networks in these geographies. Aruba/Silver Peak will therefore need to place a greater emphasis on performance than on price benefits outside of North America.

Thirdly, the combined Aruba/Silver Peak entity lacks a strong firewall product. Many of the vendors that are doing well in the SD-WAN market, such as Cisco and Fortinet, have already combined this capability with their SD-WAN product. HPE will need to address this weakness.

Recent deals have reduced the number of independent SD-WAN vendors (a factor that may have increased Silver Peak’s price), but a number of successful companies remain such as 128 Technology, Aryaka, Cato Networks and Versa.5

Comments on the HPE announcement call suggested that Silver Peak initiated the sales process; competition from other buyers may have played a role in the high price. Plenty of potential buyers of SD-WAN vendors remain, including Aruba’s direct competitors that do not have SD-WAN, such as Extreme Networks. In the firewall market, Check Point is the last of the big four vendors without SD-WAN (though its CEO Gil Shwed said “we’re looking into [SD-WAN] like everyone else” in its most recent earnings call). Other, smaller firewall vendors, may also want to obtain SD-WAN technology. Companies that have relied on internally developed SD-WAN solutions may want to acquire if their internal solution is not satisfactory (Cisco and Palo Alto Networks both did this, for example).

Less likely, but not impossible, is the acquisition of an SD-WAN vendor by a telecoms operator. For example, Verizon is an investor in, and the largest customer of, Versa Networks. Verizon stated its intent to be seen as more of a technology company in July 2020; it acted upon this by acquiring unified communications firm BlueJeans. Verizon’s limited presence in countries outside of the USA also means that Versa could continue to sell its technology to other operators (just as AT&T continues to supply other operators with AlienVault’s SIEM technology).

The big cloud players (AWS, Google and Microsoft) will also be tracking the SD-WAN market.

HPE still has work to do to catch up with competitors

The logic of combining Aruba with Silver Peak is clear. The price paid looks high based on both the increase in the addressable market and other similar deals, but HPE will be reassured by the success of Silver Peak’s business to date. However, HPE is late to join the SD-WAN market, and crucial gaps in its portfolio will need to be filled if it is to be a credible provider of full solutions.

3 The price paid by Cisco for Viptela is based on data from SEC filings. An earlier press release put Viptela’s price at USD610 million.