What is the IoT value chain and why is it important?

Companies with ambitions to succeed in the provision of IoT need to identify the roles that they can play in the IoT value chain and the types of partnerships that they should forge to deliver solutions. They also need to understand who they are competing with.

What is the IoT value chain?

In addition, many different software components, which can be loosely grouped as applications, deliver additional value to the end user.

Other parts of the value chain for IoT can include the systems integrators (SIs) or developers that design, build and manage IoT services. The physical IoT device will often need to be installed and maintained. Depending on the service, this installation process can account for a high share of the overall value (for example, in smart metering projects, where the installation process may cost more than the device). 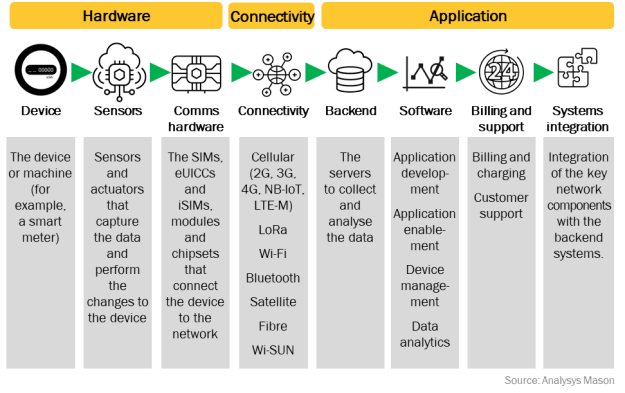 What type of connectivity is best for IoT?

Enterprises can choose from a range of IoT connectivity options to support their IoT deployment. Their choice will depend on use case requirements and will also be governed by factors such as cost, ecosystem support and coverage requirements (local, national or global). Some examples include:

Static assets can be connected directly to a fixed or cellular network or they may use a local area network such as Wi-Fi to connect to a gateway, which then connects to the macro network.

Mobile assets such as cars and trucks can move between countries or static assets such as vending machines can be shipped abroad and used in a single country. Cellular technology is often used to support the connectivity requirements of these assets, especially mobile assets.

What is the size of the IoT value chain revenue opportunity?

Analysys Mason produces forecasts for cellular and low-power, wide-area (LPWA) connections and the associated IoT value chain revenue. These forecasts focus on three key areas: hardware, connectivity and applications revenue (see Figure 3). We do not include fixed network, satellite or short-range technologies. Analysys Mason’s IoT value chain revenue forecast encompasses a broad range of services that we group under the ’application’ category, which includes application development, software platforms for managing devices and open APIs for developers, as well as backend systems. The hardware component includes the device, the communications hardware and the hardware installation.

Who are the key players in the IoT value chain?

The IoT value chain is both crowded and fragmented. IoT attracts traditional hardware, connectivity and application players as well as new entrants and start-ups.

The hardware domain includes players that design the chipsets (for example, Arm) and sell chipsets (such as Altair and Qualcomm), and providers of SIMs and modules (such as G+D, Sierra Wireless and Telit). It also includes original equipment manufacturers (OEMs) that build the devices such as smart meters (for example, Diehl Metering and Itron) and are building connectivity enablers into their devices.

The role of connectivity provision in the IoT value chain is occupied by network operators2 such as Orange, Tele2 and Verizon, as well as mobile virtual network operators (MVNOs)3 or IoT connectivity specialists, such as 1NCE, Cubic Telecom and Kore Wireless. Operators and MVNOs provide cellular network connectivity such as LTE, NB-IoT and LTE-M, and a few (such as Orange) complement their offer with LoRa. These companies compete with network providers that offer IoT connectivity based on technologies such as Sigfox and LoRa. For example, Sigfox network operators such as Thinxtra and WND have deployed networks across multiple geographies. Amazon and Helium have partnered with LoRa to extend Amazon Sidewalk and Helium networks beyond the home and neighbourhood to provide regional or national coverage. Other connectivity options focus on a specific sector. For example, Silver Spring Networks developed the foundation technology that is now known as Wi-SUN to support smart meter deployments. The technology is now supported by an ecosystem of players through the Wi-SUN Alliance.

Companies such as AWS, Google and Microsoft all offer IoT stacks for the backend component of IoT deployment. They have become an integral part of the IoT value chain because companies increasingly require that their data is delivered to the cloud.

Systems integrators also play an important role in the IoT value chain. They integrate all of the components to ensure that they communicate and deliver the data to the business systems. Large companies such as Accenture and EY, as well as smaller specialists such as Mugler AG, deliver these services.

The IoT value chain is complex; it involves diverse roles and many different types of companies to deliver end-to-end IoT solutions. Few companies are able to capture value from multiple areas of the IoT value chain but some are building or acquiring new competencies to extend their role across the value chain.

4 Companies such as AWS, Google and Microsoft that deliver scalable computing infrastructure to support cloud computing and big data.