M&A activity in Western Europe is entering a new phase


"The number of pure fixed and pure mobile operators in Western Europe is dwindling, so we expect to see more in-market consolidation."

Operators in Western Europe (WE) are continuing to use mergers and acquisitions (M&A) to evolve and diversify their offerings, expand or stabilise their market shares and achieve cost-saving synergies.1 Indeed, M&A activity has picked up slightly after the hiatus due to the COVID-19 pandemic. Historically, operators in WE have used M&A to improve the strength of their fixed–mobile convergence (FMC) offerings, which led to a large number of deals between predominantly fixed operators and predominantly mobile providers. However, the number of pure fixed and pure mobile operators is dwindling, so we expect to see some attempts to merge converged operators.

Large operators in WE are increasingly pursuing M&A deals

Operators are keen to enter new markets without making major investments and are looking to M&A to expand their footprints, reduce churn and decrease pressure from competition. M&A deals can also enable operators to save costs over time. This cost saving is likely to be largely opex-related (usually around 80%1) and is expected to come from the rationalisation of systems and the reduction in wholesale access costs. A number of leading operators in WE have recently been involved in M&A. Examples of recently completed deals include the following.

These M&A deals are expected to be some of the last examples of (mostly) fixed operators merging with (mostly) mobile operators. Fixed–mobile M&A deals have generally been accepted by competition authorities because the fixed broadband and mobile markets are seen as two separate entities, so the risk of diminishing innovation and competition is less than that for mobile+mobile of fixed+fixed mergers.

Other M&A deals that have been proposed or are under consideration include the following.

We expect to see steady but unspectacular growth in the FMC share of fixed broadband connections in most countries in WE (Figure 1). FMC helps to reduce churn and provides cross-selling opportunities to a deeper customer base and hence offers access to revenue-related synergies. However, this growth is likely to slow down over time as the opportunities for fixed+mobile M&A decrease. Furthermore, the trend of offering heavily discounted FMC bundles (a common practice in France, Portugal and Spain, potentially via large mobile discounts in order to secure FTTP contracts in highly competitive markets) has abated in recent years and as a consequence, growth in FMC penetration has slowed in many regions. 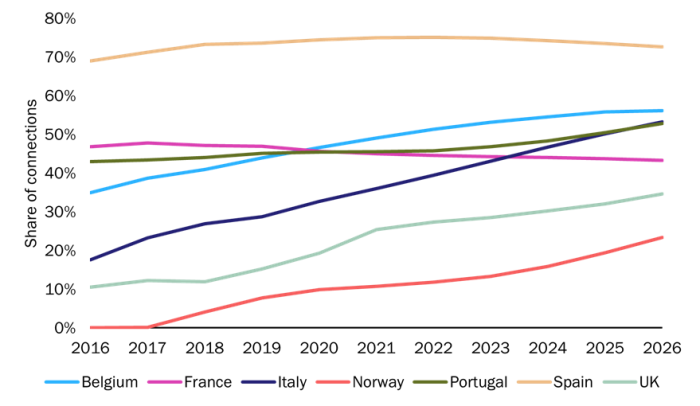 In-market mobile consolidation is becoming increasingly commonplace in WE

There have been several proposals for in-market mobile consolidation in recent years; it has been much more challenging for these proposals to gain approval from competition authorities. For example, mobile operators Vodafone UK and Three recently held talks regarding a possible merger, which would reduce the number of MNOs in the UK from four to three. Ofcom revealed, in February 2022, that it may be more open-minded to mobile consolidation in the future.

Iliad and Vodafone Italy entered into discussions over a possible merger in January 2022, although Iliad subsequently proposed a take-over, which was rejected by Vodafone.

Orange and MÁSMÓVIL recently entered into negotiations to merge and form a 50:50 joint venture. The merger would give the combined entity a higher market share in both the mobile and fixed broadband market than the incumbent, Telefónica (Movistar) (Figure 2). 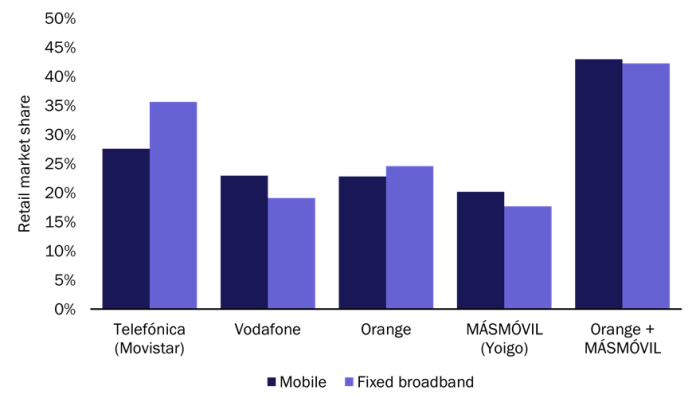 Spain has the highest FMC penetration in Europe; this is largely due to the very low barriers to building new FTTP networks. The mobile-only and fixed-only customer segments are very small and the four mobile operators are all now essentially FMC plays. The deal between Orange and MÁSMÓVIL would further reduce the market down to just three, all essentially FMC, providers. This proposed merger will therefore serve as a litmus test for the change in sentiment towards consolidation.

The pace of fibre roll-out in CEE is increasing, but service take-up is limited due to competition from FWA