The number of smartphone shipments is stagnating, but there are still opportunities for operators


"MNOs can adapt their mobile handset bundles to accommodate consumers’ preferences for longer handset lifetimes and can target regions where handset penetration is growing."

Operators are an important distribution channel for mobile handsets in many countries (Figure 1) because they bundle handsets into their mobile data plans to differentiate their offerings and manage churn. In this article, we use the results of Analysys Mason’s consumer survey to highlight trends in the mobile handset market and related opportunities for operators. We conclude that operators should consider new approaches to handset bundling in light of recent trends in the smartphone market. 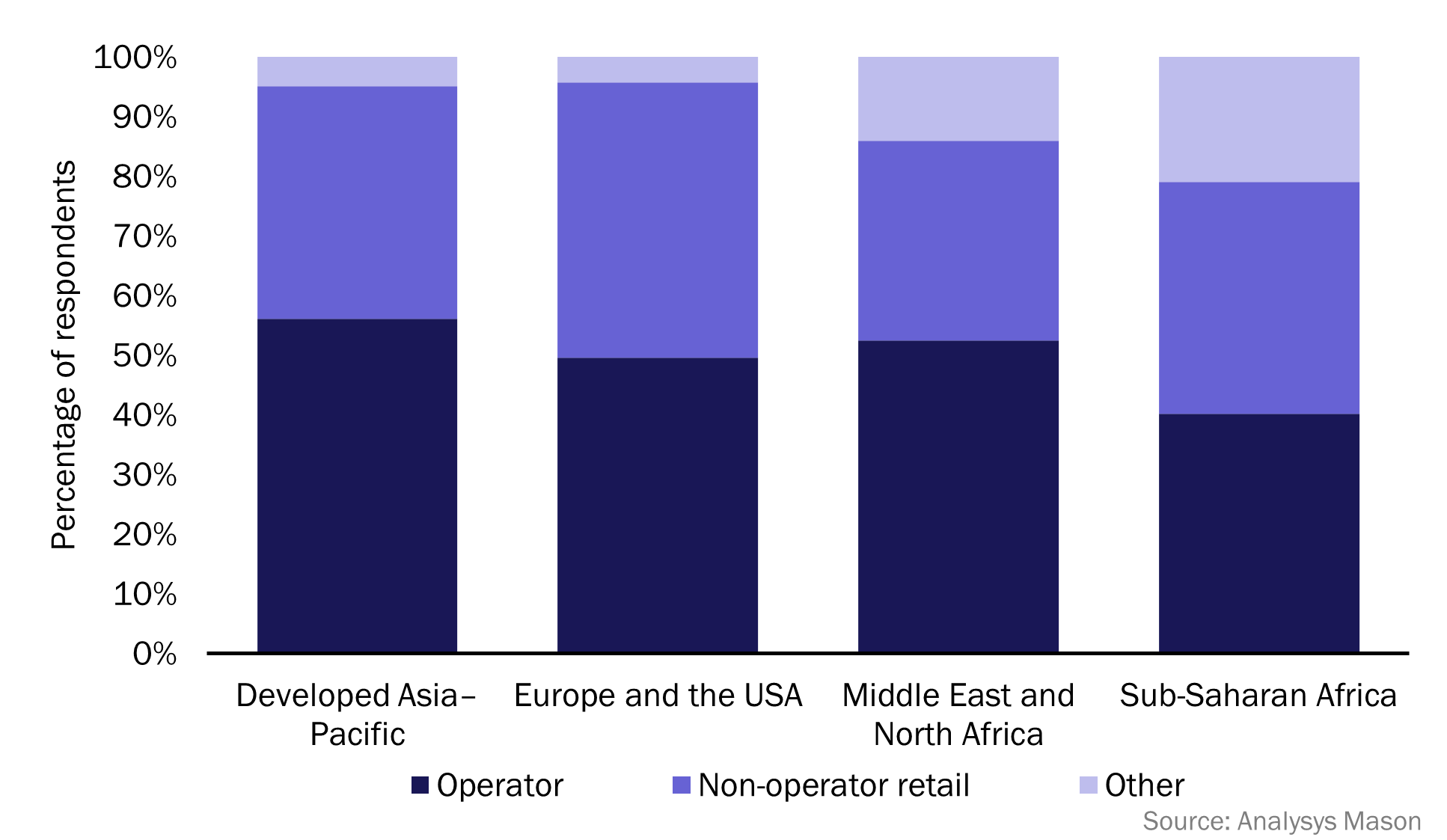 Figure 2 shows the average handset lifetime among respondents to Analysys Mason’s consumer survey. We calculated these figures by adding the reported handset age for each respondent to the time until they plan to replace their device. Handset lifetimes are increasing in all of the regions shown in Figure 2. This is probably because recent innovations in handset technology have not led to radically different features that would incentivise consumers to upgrade their existing handsets. Moreover, global chipset shortages have caused smartphone prices to rise, which may have led consumers to delay replacing their mobile phones. 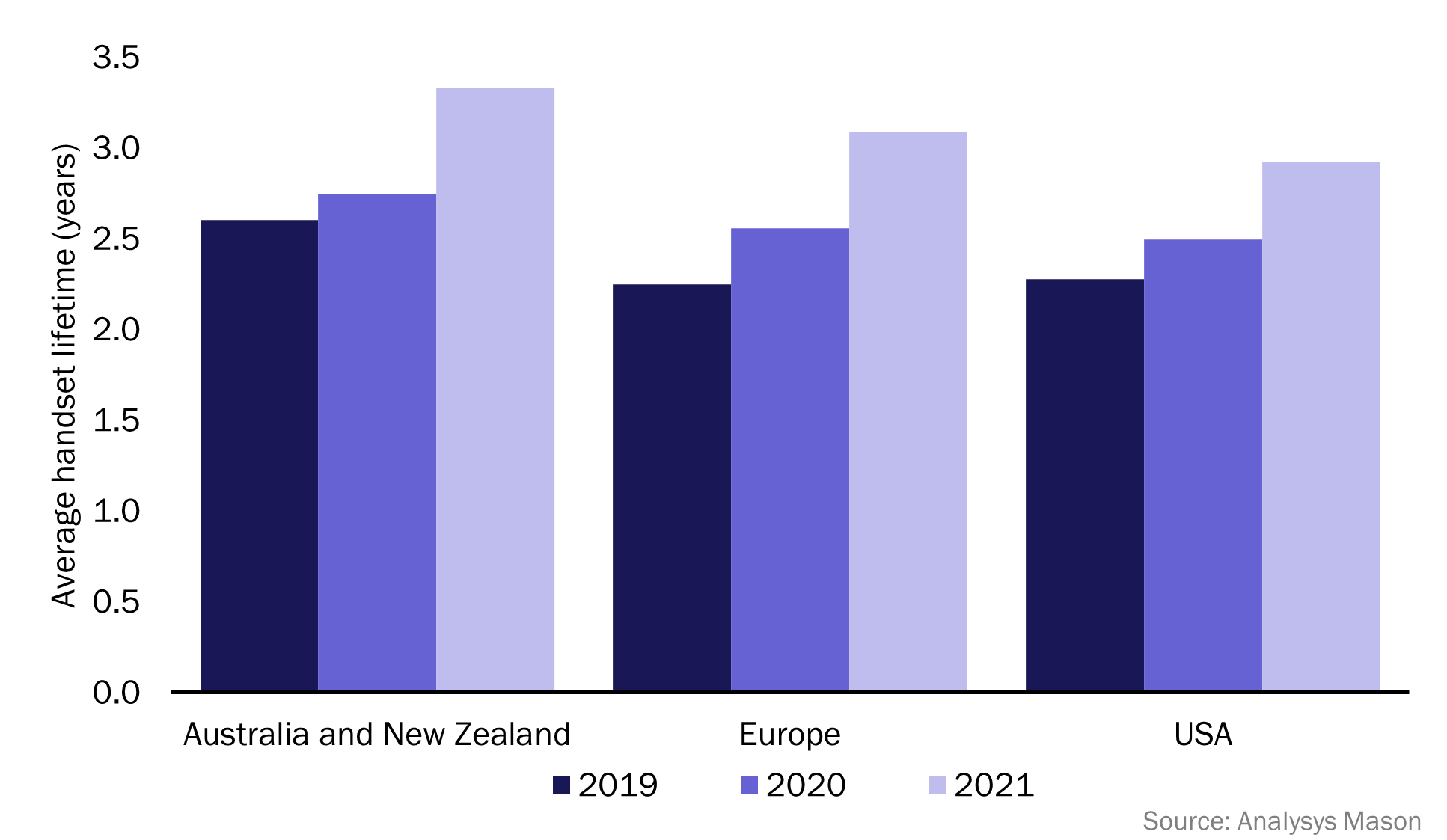 Analysys Mason expects that longer handset lifetimes will lead to a decrease in the year-on-year growth in the number of handset shipments. The penetration of mobile handsets is so high in developed markets that most purchases are made to replace existing handsets. Indeed, 99%, 97% and 98% of respondents in Europe, developed Asia–Pacific and the USA, respectively, reported owning a smartphone in 2021. We predict that growth in the total volume of handset shipments in these countries will fall as consumers upgrade their handsets less frequently.

The popularity of operator handset bundling has declined in recent years. Operators make small, sometimes negative, margins on bundled devices due to the subsidies that these bundles include. Moreover, low growth in smartphone sales and competition from consumer credit options, such as Klarna, have reduced the extent to which operators view handset bundling as a way of differentiating their mobile plans. Indeed, the proportion of survey respondents that reported receiving their mobile handset through their mobile contract fell between 2019 and 2021 in all European countries surveyed, other than France and Germany.1

Operators are increasingly pursuing other strategies to differentiate their offerings and reduce churn. For example, many operators bundle fixed and mobile services together into fixed–mobile convergence (FMC) plans and apply discounts on these plans to differentiate their offerings. However, FMC bundling is less feasible for MNOs that do not have their own fixed infrastructure. These operators could consider the following ways to adapt their handset bundling strategies to better manage churn.

Growth in the smartphone market is stalling, but operators still have a role to play

There are still opportunities for MNOs to make use of their role as a key handset distribution channel, despite the poor outlook for handset shipments in developed countries. These operators can adapt their offerings to target consumers who wish to maintain their handsets for long periods of time and can facilitate increased smartphone adoption in markets where affordability is a barrier to further penetration.4

Mobile devices and distribution channels in Europe and the USA: consumer survey