Spending on private networks will reach USD7.7 billion in 2027, but challenges to adoption persist


"Private networks will be an important bellwether for the success of 5G in the industrial sector."

The number of private LTE/5G network deployments worldwide is growing rapidly. Indeed, Analysys Mason forecasts that the number of networks will grow at a CAGR of 65% between 2021 and 2027 to reach 39 000. Spending on these networks will rise to USD7.7 billion during the same period; this is a large figure in isolation, but appears small when compared to the spending on public network infrastructure. However, private networks could act as an important new revenue stream for the mobile industry in the longer term, and will also be an important bellwether of the success of 5G in the industrial sector.

This article is based on Analysys Mason’s report, Private LTE/5G networks: worldwide trends and forecasts 2022–2027.

Enterprises’ spending (capex and opex) on private LTE/5G networks will reach USD7.7 billion worldwide in 2027 and will grow at a CAGR of 48% between 2021 and 2027 (Figure 1). Most private network suppliers will not generate significant new revenue initially, but they should nonetheless address the private networks market as an important long-term opportunity. However, suppliers will need to develop strategies now to address the challenges to private network adoption in order to build the market. These include the following. 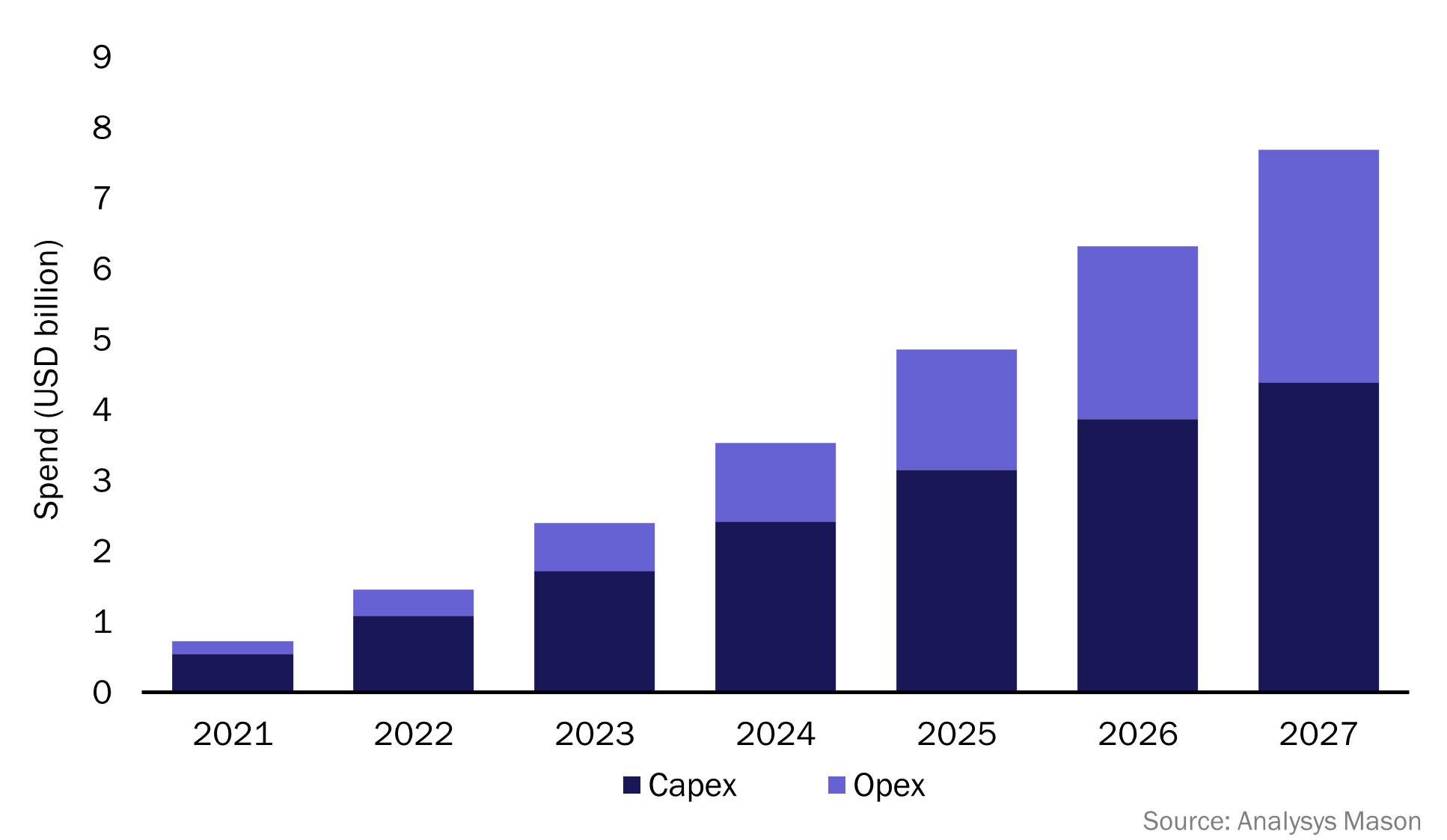 The current complex and expensive private network propositions are out of reach of most enterprises. Enterprises require simpler, affordable solutions with a service wrap that includes support for the network and the applications that will run on it. We believe that spending on private networks has the potential to grow even more quickly after the forecast period, but only if suppliers address these challenges to make their solutions accessible to a broader enterprise market.

The number of private networks that use 5G is growing, but from a very small base

Figure 2: Split of private network deployments, by technology, worldwide, 2021 and 2027 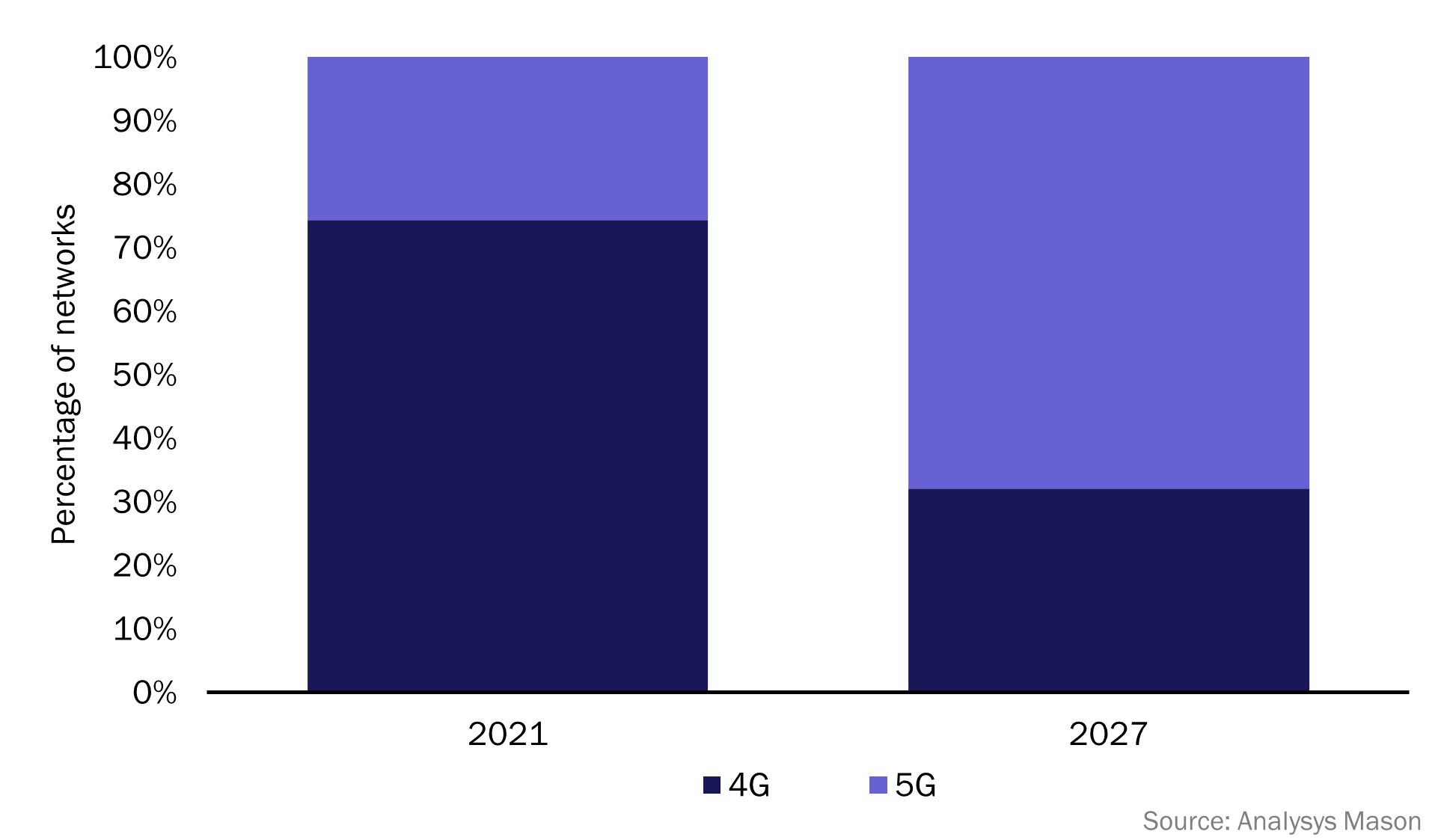 The manufacturing sector has been the leading early adopter of private 5G networks; we estimate that more than 50% of private networks in the sector used 5G in 2021 and that this figure will rise to almost 90% by 2027. Analysys Mason’s research suggests that enterprises, especially those in the manufacturing sector, are deploying 5G because it can achieve unique results in terms of automation. Manufacturing firms are investing to support new applications in the long term and believe that 5G will be the most suitable technology in the future to address requirements such as low latency.

Telecoms vendors and operators alike are placing a significant emphasis on the new opportunities that 5G enables in the industrial sector, and private network solutions will be key to demonstrating the value of 5G for industry. However, there is still insufficient activity to address some of the barriers to adoption such as the higher cost of 5G relative to other network technologies and the complexity in deploying such networks, despite significant and growing interest in private 5G. Analysys Mason believes that there is scope for the private networks market to grow significantly more quickly beyond 2027, but such growth will depend on suppliers doing more to address the barriers to adoption.

1 The forecast split is slightly different and reflects data sources that are not in the public domain. For information on publicly announced deployments, see Analysys Mason’s Private LTE/5G networks tracker.